The Eagles (6-6, 2-6 Atlantic Coast Conference) started 4-0 and sat just outside the Associated Press Top 25. They were then out of sorts for an entire month and lost four straight to open conference play. With quarterback Phil Jurkovec back following a hand injury that kept him out nearly two months, they won back-to-back games before losing the last two to drop to .500.

A win over No. 21 Wake Forest (10-2, 7-1 ACC) at Alumni Stadium would have changed the narrative entirely, but instead the Eagles suffered a head-scratching defeat that left them wondering what could have been once again. The Demon Deacons, meanwhile, captured their first Atlantic Division title since 2006 and will play Pittsburgh in the ACC championship game.

The Eagles have lost 25 straight to AP Top 25 teams, with the last such victory coming in 2014. BC, still searching for its first eight-win season since 2009, will wait to find out its bowl fate, with the Fenway Bowl a distinct possibility.

Fourth interception of the season and eighth of his career for Brandon Sebastian.

“We had resolve, and we’re resilient, but if you want to be great, there has to be consistency,” senior captain Marcus Valdez said. “You can’t have that four-week stretch where we lose four games.”

On top of a dynamic opponent, the Eagles faced another unique obstacle this week. Thirty-two Boston College players had the flu, including Jurkovec, and 10 were out Saturday for that reason. The Eagles had a walk-through instead of a full practice both Wednesday and Thursday as a result. Hafley said the outbreak didn’t alter the game plan, but he believes it did affect the execution.

He made sure to mention that wasn’t an excuse, and Wake Forest outplayed BC, but he does believe it was a factor. The Eagles finished just 1 of 10 on third down compared to 11 of 21 for Wake, were outgained 413-182 in total yards, and registered only nine first downs compared with 25 for the Demon Deacons in a largely lackluster performance.

Jurkovec finished 3 of 11 for 19 yards, registering just one more completion than interception. Wake Forest QB Sam Hartman was 20 of 32 for 236 yards, three touchdowns, and one interception, plus one rushing TD.

“There were too many three and outs,” Hafley said. “We didn’t have enough drives that were sustained, and certainly 10 points is not going to beat this team.”

The Demon Deacons built an early 14-0 lead on a 7-yard touchdown run from Hartman and 33-yard pass from Hartman to A.T. Perry. The Eagles responded with a 15-yard feed from Jurkovec to Trae Barry to make it 14-7 Wake Forest through one.

4th TD of the season for the BC tight end.

Both teams added field goals in the second quarter, and Wake extended the margin to 24-10 at halftime on a 7-yard TD pass from Hartman to Perry with 10 seconds remaining.

BC finished the first half with 172 rushing yards but just 19 passing yards, while Wake had 186 in the air and 74 on the ground. Hafley said he believed the Eagles played the whole game on their side of the 50-yard line on defense.

The Eagles believed they sliced the deficit in half when Zay Flowers scored from 73 yards out following a flurry of moves, but officials called Jurkovec for a controversial blindside block that negated the score.

“I’d just rather not comment on anything on the officials right now, because I’ll probably say something I’ll regret,” Hafley said. “I don’t want to do that today. That was an unbelievable play. I thought it was a good block. Now you’re talking about a 7-point game with momentum on our side, and it’s a totally, totally different football game. Not even close to what just happened.”

Instead, BC had to punt, and the Demon Deacons tacked on another field goal, followed by a 3-yard TD run from Christian Turner to extend the cushion to 34-10 through three. Blake Whiteheart added a 2-yard TD reception in the fourth to salt away a smooth and stress-free victory.

Valdez referred to the regular season as an “emotional rollercoaster,” and he believes the Eagles deserve credit for bouncing back after losing four in a row. He simply wishes they had finished on a higher note.

Running back Pat Garwo — who became the 19th player in BC history to rush for 1,000 yards in a season — echoed those thoughts and made it clear there’s more football to be played.

“We want to finish off right,” Garwo said. “It’s a long season, and it’s a rewarding one if we continue to develop and put everything together.”

Hafley, as disappointed as he was with the result, thanked the senior class for embracing him and the rest of the staff right away.

“I’m glad they’re a part of my life,” he said. “As much as I like to say I like to help change people’s lives, that group has changed my life. They have, and I will never forget that.” 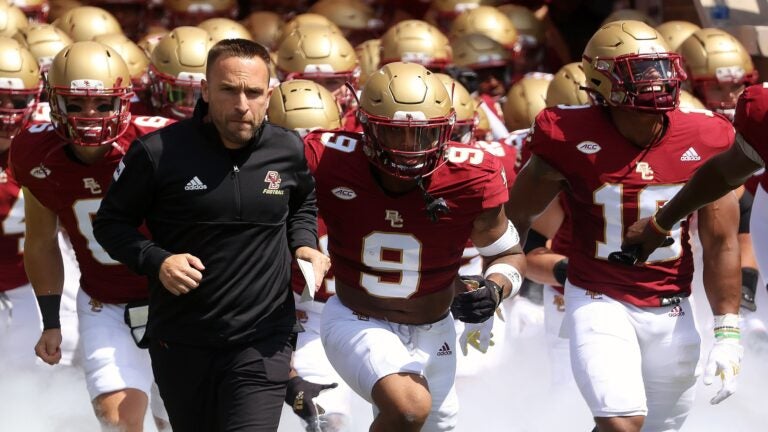