As he entered Fish Field House through the glass double doors Friday following Pro Day, it was easy to tell Zion Johnson was a busy man.

Johnson, a projected first-or-second-round pick whose stock is rising by the day, held his phone in his left hand, up to his ear. He quickly but politely wrapped up a call before shifting gears to meet members of the media.

It’s been a dizzying, hectic few months for Johnson and other former Boston College football players hoping to find a home in the NFL. From all-star games to the NFL Combine and now Pro Day, many one-time Eagles have had a chance to prove themselves on a grand stage.

“It’s been amazing,” Johnson said. “All of us have dreamed of going to the NFL, of playing at the next level. Every day that we get closer to that, it’s just an extra level of excitement.”

Here’s a closer look at how the day unfolded:

Johnson, a zero-star recruit who played two years at Davidson College and three with the Eagles, is now widely regarded as one of the top offensive linemen in the draft. He has extensive experience at guard and tackle and has shown his versatility by dabbling in center at the pre-draft process.

He referred to himself as a “late bloomer” and said he’s thrilled to have the opportunity to show how far he’s come.

“People may not believe me, but I still feel like an underdog,” Johnson said. “I still feel like that underdog kid that had to show guys that I could play football. I try to keep that chip on my shoulder.”

Johnson, a native of Bowie, Maryland, said he’s informally chatted with Patriots scouts a few times. They haven’t been as involved as some other teams, though, in part because they come to watch every BC home game and already know him well.

He said he’ll be grateful to play anywhere but acknowledged earning a spot on the Patriots would be special.

“I love this area,” Johnson said. “To be here and to be close to BC, where I’ve been for the past three years, it would definitely mean a lot.”

As center Alec Lindstrom navigates the NFL Draft process, he doesn’t have to search far for inspiration and guidance.

His brother, Chris, a former Boston College star who now plays for the Atlanta Falcons, is always nearby. Lindstrom, a Dudley native and Shepherd Hill graduate, relies on his brother for both positive feedback and constructive criticism.

“Having that resource that not a lot of people have is so amazing, and I’m so grateful for it,” Lindstrom said.

Lindstrom, a member of the All-ACC first-team this past season, is expected to be taken in the middle rounds. He said he’s relieved to have this portion behind him and is looking forward to what’s next.

“It’s a weight lifted off your shoulders, because this is the last big step in the pre-draft process,” Lindstrom said. “It feels good. Now all the evaluation is over, so you can go to strictly football mode.”

“He’s definitely been a big help, more so as a father than as a coach, so it’s been great,” Vrabel said.

Isaiah Graham-Mobley, Trae Barry, and Brandon Sebastian are in the mix.

Graham-Mobley is another player to keep an eye on, either as a draft pick or an undrafted free agent. The former Temple product ran a 4.63 40-yard dash and posted a 34.5 inch vertical and 10 foot, 4-inch broad jump at the Combine.

He recently wrapped up his sixth year in college and earned his master’s degree from BC and is one of the more seasoned players in the country.

“I definitely think I’m ready,” he said with a grin. “I’m happy that I’m not doing a seventh year.”

The tight end Barry, a 6-foot-6, 244-pound target with terrific hands, looked sharp in quarterback/tight end drills with Grosel. His size and ability to make tough catches in traffic make him an intriguing prospect.

“All I need is an opportunity,” Barry said, “and I think I’ll make the most of the opportunity that I get.”

Sebastian kept it simple, sharing that his focus was simply to block out the noise, run fast, and jump high.

“I ran kind of fast, jumped kind of high,” he said. “Hopefully it gets me drafted.”

Many others are fighting for a spot.

One outside-the-box storyline was the participation of former Boston College baseball outfielder Dante Baldelli. Baldelli, a three-year wide receiver and two-time Division 1 state champion at Bishop Hendricken High School, showed off his athleticism while reeling in deep balls from Grosel.

Grosel, who made 14 career starts for the Eagles, was efficient and effective throwing the ball to his former teammates. Carlson, a standout punter, has a chance to find an NFL home. Levy, Barlow, Palmer, Thompson, and Petrula, among others, all impressed Friday. 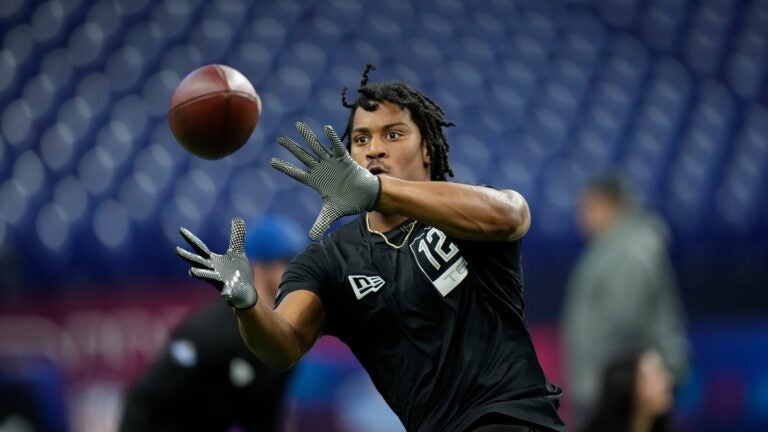