On Saturday, two teams will book spots in the Final Four of the men’s NCAA basketball tournament in New Orleans, while two others will see their seasons come to end.

Here’s what to watch for Saturday. All times are Eastern.

It’s March, so that must mean coach Jay Wright and the No. 2-seeded Wildcats (29-7) are heating up at the right time. Villanova has won eight straight games dating to a Feb. 22 loss at Connecticut. The run has featured three victories in the Big East Tournament at Madison Square Garden, and three during the NCAA Tournament, including a 63-55 win over Michigan on Thursday in San Antonio.

“I think we’re beyond building,” Wright said after the win over Michigan. “We’re going to rest. We’re beat up. We’ve got to rest up. We can learn a little bit watching film. It’s about surviving now.”

Villanova is 19-3 in its last six NCAA tournaments and won the championship in 2016 and 2018. Those were the last two years in which the Final Four was broadcast on TBS instead of CBS. This year’s Final Four? Back on TBS again.

One year after leading the Cougars to the Final Four, Houston coach Kelvin Sampson has his team within one victory of returning. And he has gotten here despite having five new starters.

All five of last year’s starters either moved on or suffered injuries. Quentin Grimes, a key player on last year’s team, is now on the New York Knicks’ roster. Guard Marcus Sasser, who scored 20 points as a sophomore in the national semifinal against Baylor a year ago, went down with a season-ending injury in December, as did sophomore guard Tramon Mark.

Still, Houston has maintained its trademark defensive intensity, and it often seems as if the team has seven defenders on the floor, instead of five. In the second round, the Cougars limited Illinois to 34% shooting. Against No. 1-seeded Arizona on Thursday, they held the Wildcats to 33% while knocking off a single-digit seed for the first time since the 1984 Final Four, when Hakeem Olajuwon was a star.

“They’re not afraid of anybody, whether that’s UAB or Illinois, Arizona, our next game Villanova,” Sampson said. “We’ll just move on to that one, and we’ll do the best we can with that one.”

Coach K vies for a sixth title before retirement.

Duke, seeded No. 2, faced a real scare before eventually prevailing over third-seeded Texas Tech 78-73 on Thursday night in San Francisco. The Blue Devils outscored the Red Raiders 12-5 in the last four minutes to give coach Mike Krzyzewski his 100th NCAA Tournament win. Only five programs have more tournament wins than Krzyzewski’s 100 — Kentucky, with 129; North Carolina, 128; Duke, 117; Kansas, 111; and UCLA, 108.

The Blue Devils enter as 4-point favorites, but in order for Krzyzewski to reach his 13th Final Four — and first since the Blue Devils won their fifth championship in 2015 — they will have to handle Arkansas’ defensive pressure (8:49 p.m., TBS). In taking out Gonzaga 74-68 on Thursday, the Razorbacks were relentless on the defensive end.

“Just trust in your work,” he said. “These guys trust me, and the coaching staff trusts me.”

Led by former NBA head coach Eric Musselman, the No. 4 Razorbacks (28-8) are in the round of 8 for the second straight season and are seeking to reach their first Final Four since 1995, when they were runners-up to UCLA.

Playing aggressive defense, cutting off angles and stopping long outlet passes, the Hogs stunned Gonzaga, the tournament’s top overall seed. With both Gonzaga and Arizona going down Thursday, it was the fourth time since the tournament expanded in 1979 that three No. 1 seeds lost before the round of eight; Baylor was ousted last weekend by North Carolina.

“This is what we dreamed about,” he said. “This is what we came here to do. Coach said before we left Fayetteville, if we didn’t want to win, then don’t get on the plane. I feel like we brought that the whole time we’re here.” 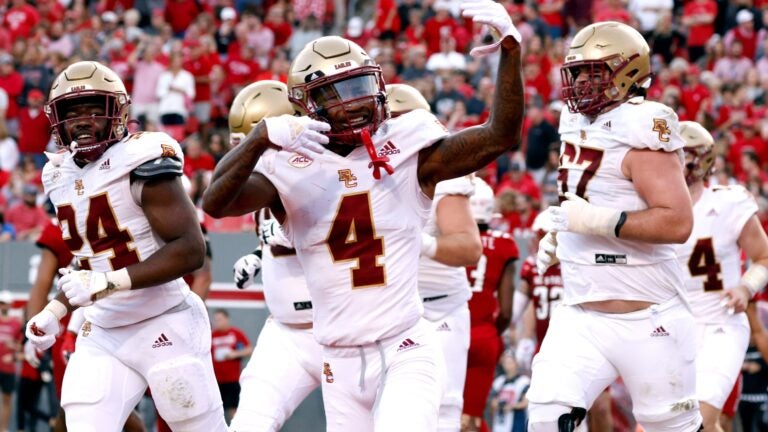