As Zay Flowers mulled his future this offseason, he found himself at a crossroads.

He could take a gamble and declare for the NFL Draft; transfer and make thousands of dollars in a name-image-likeness deal; or play the long game and return to Boston College for one final season of football.

Flowers, an electric all-ACC receiver who has 13 siblings, decided he wanted to become the first person in his family to graduate college.

He also felt that he, quarterback Phil Jurkovec, and the rest of the Eagles had more to accomplish. So he stayed patient and stayed put.

BC was picked to finish sixth in the Atlantic Coast Conference Atlantic Division in the preseason poll, but don’t tell that to Flowers. When asked on the first day of training camp Friday what would make this season a success, he didn’t hesitate.

There’s a collective sense of optimism this year, though, and it was clear right away that Flowers & Co. have “unfinished business” on their minds.

“It’s just Day 1, but you can definitely feel it,” said Jason Maitre, a graduate student and defensive back from Everett. “We’ve got a different edge about us. We definitely needed that. I think we underachieved. We can do big things.”

The Eagles wasted no time Friday at Fish Field House. With temperatures hovering around 90 degrees, players, coaches, and staff were already flying around the field before practice started at 8:30 a.m.

The Jurkovec-to-Flowers connection was alive and well in positional drills, and the overall team speed was on display.

Hafley credits strength and conditioning coach Phil Matusz and his staff for preparing players during the spring and summer. Training camp is no longer about running hills and conditioning, Hafley said; now the focus is on keeping players in shape while allocating more time to football itself.

“As we go through camp, we need to figure out fast what we do really well,” Hafley said.

Many familiar faces are back on the offensive side of the ball.

A year ago, the Eagles finished last in the ACC in yards per game, 12th in points, 12th in passing yards, and ninth in rushing yards, but Jurkovec missed more than half the season with a hand injury he suffered in Week 2 against UMass. Even when he returned for the final four games, he had trouble gripping the ball and never got back into a rhythm.

The offensive line is perhaps the biggest X-factor. Highly regarded but relatively inexperienced, players such as Jack Conley, Finn Dirstine, Drew Kendall, and Ozzy Trapilo will help fill the void after the Eagles lost Zion Johnson, Alec Lindstrom, Ben Petrula, and Tyler Vrabel to the NFL, plus star guard Christian Mahogany to a season-ending ACL injury.

With new coordinator John McNulty calling plays, expect to see an offense that resembles last year’s in some ways but has its own wrinkles.

“I think it’s a perfect match,” Gill said. “We’re getting fast guys the ball in open space. I feel like that’s what we’ve needed here for a while. We’ve got the athletes to do that.”

The Eagles made major strides defensively last fall, finishing third in points allowed (22.2) and giving up by far the fewest passing yards per game in the conference (173.5). Maitre, Josh DeBerry, Jaiden Woodbey, CJ Burton, and Elijah Jones all return, and should make the position group one of the strongest in the country.

Vinny DePalma, Chibueze Onwuka, Cam Horsley, Shitta Sillah, Bryce Steele, Marcus Valdez, Khris Banks, and Kam Arnold are all back as well. Hafley said this is the most depth the Eagles have had at defensive line in his tenure.

The Eagles, who open the season Sept. 3 at home against Rutgers, are determined to escape from the doldrums of mediocrity. Hafley acknowledged he has even “more of an edge” himself after last year, and it’s clear that mind-set has trickled down to the players.

“Everybody’s going to count us out regardless,” Woodbey said. “We have that edge, and we’re going to keep it that way.” 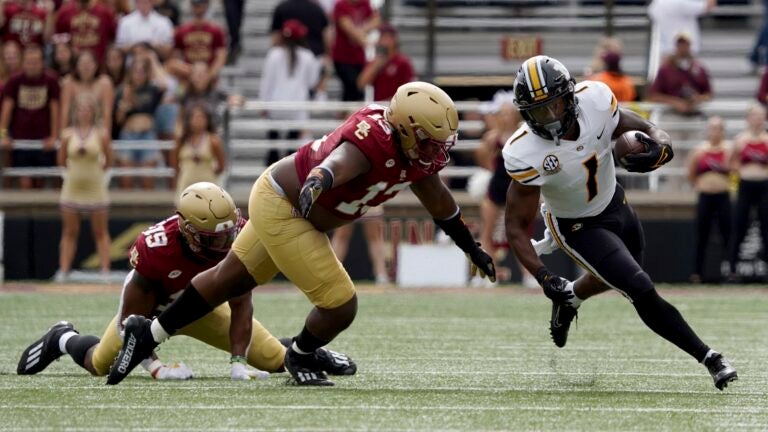 On defense, BC’s mission is to hold its ground against the run