The Eagles allowed 26 straight points in the final 9 minutes, 56 seconds, squandering an 11-point lead and falling, 32-23, to Syracuse at Alumni Stadium.

It was another agonizing defeat for the Eagles (3-9, 2-6 Atlantic Coast Conference), who started the year by blowing a 9-point fourth-quarter edge against Rutgers. Wins over Louisville and North Carolina State showed long-term potential, but otherwise, they took a major step back in the third year under Hafley.

Zay Flowers delivered a highlight in the final seconds to further cement his place in BC lore. The senior, who already held the record for most receptions and receiving yards in BC history, surpassed Kelvin Martin for first all time with 29 receiving TDs.

Despite his heroics, the Eagles suffered their first nine-loss season since 2015 and just their fifth since 1951.

BC started strong against the Orange (7-5, 4-4), as Bryce Steele forced and recovered a fumble in the opening minute to set up a 28-yard Connor Lytton field goal moments later.

Freshman Edwin Kolenge then blocked a punt, which led to a 7-yard touchdown pass from Emmett Morehead (29-for-38, 2 TDs) to Flowers.

Flowers (8 catches, 110 yards, 2 TDs) made a quick move and froze the defender before corralling the pass and waltzing into the end zone untouched with 10:47 left in the first quarter for a 10-0 lead.

Kam Arnold, Kolenge, and Donovan Ezeiruaku also sacked Syracuse quarterback Garrett Shrader, as BC’s total of four sacks in the quarter eclipsed its high in a game this season.

A series of penalties and miscues for both sides shaped a lackluster second quarter. Syracuse sliced into the deficit on a 47-yard field goal from Andre Szmyt with 2:18 left in the half. Each team had a shot to score late, but nothing materialized, as BC took a 10-3 edge into halftime.

Syracuse marched 83 yards over seven-plus minutes in the third quarter before Ezeiruaku registered another sack and forced the Orange to settle for a 29-yard field goal. That made it 10-6 BC through three quarters, as both defenses continued to excel in the red zone.

The Eagles then embarked on a nine-play, 78-yard drive, highlighted by a 30-yard catch along the sideline from Flowers. Pat Garwo (86 rushing yards) bulldozed into the end zone from 5 yards out with 12:58 remaining to extend the margin to 17-6.

BC finished with 89 net rushing yards, which may not seem like much, but it was a welcome sight to a team that entered last in the nation with 60.9 per game.

“You’ve got to take the little wins in some of the big losses,” Garwo said.

At that point, though, just like they did against Rutgers, the Eagles unraveled in the game’s key moments.

Syracuse immediately answered on an 8-yard TD pass from Shrader (21 for 27, 285 yard, 2 TDs) to Devaughn Cooper with 9:56 remaining. Chibueze Onwuka stuffed Shrader at the 1-yard line on a 2-point attempt to help BC preserve a 17-12 edge.

The Orange took their first lead, 18-17, on a 58-yard bomb from Shrader to Damien Alford with 7:05 left. Once again, the 2-point attempt failed.

Morehead fumbled on third down with 5:25 remaining, Sean Tucker (21 carries, 125 yards, 2 TDs) scored from 5 yards out, and Morehead couldn’t quite reach the marker on a fourth-down rush. Tucker scored again with 35 seconds to play to extend the lead to 32-17.

“We had all the momentum at the beginning of the game, going through the game, at halftime,” said Ezeiruaku, a sophomore defensive end. “We came out and they stunned us a little bit.”

The Eagles, playing without ballhawks Cole Batson, Josh DeBerry, and Elijah Jones, lost CJ Burton in the second half, which caused the playbook to shrink. At the same time, Hafley said, the Eagles had several chances to stop Syracuse’s momentum.

“We had to kind of dial it back,” Hafley said. “Some young guys were out there for the first time ever.”

Much like the bulk of the season, Flowers was a bright spot.

His TD catch with :07 showing accounted for the final score. Flowers, who finished his career with 200 receptions and 3,056 receiving yards, also set the program record for most receiving TDs in a season with 12.

“He’s on a three-win team, and he’s out there blocking and fighting, and he has tears in his eyes at the end of the game,” Hafley said.

“While most guys in that situation probably would have opted out, he went harder.” 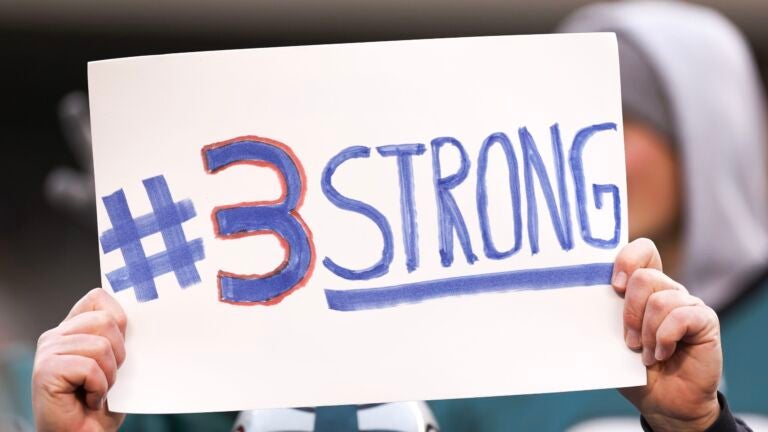 Here's one reason to root for each NFL playoff team