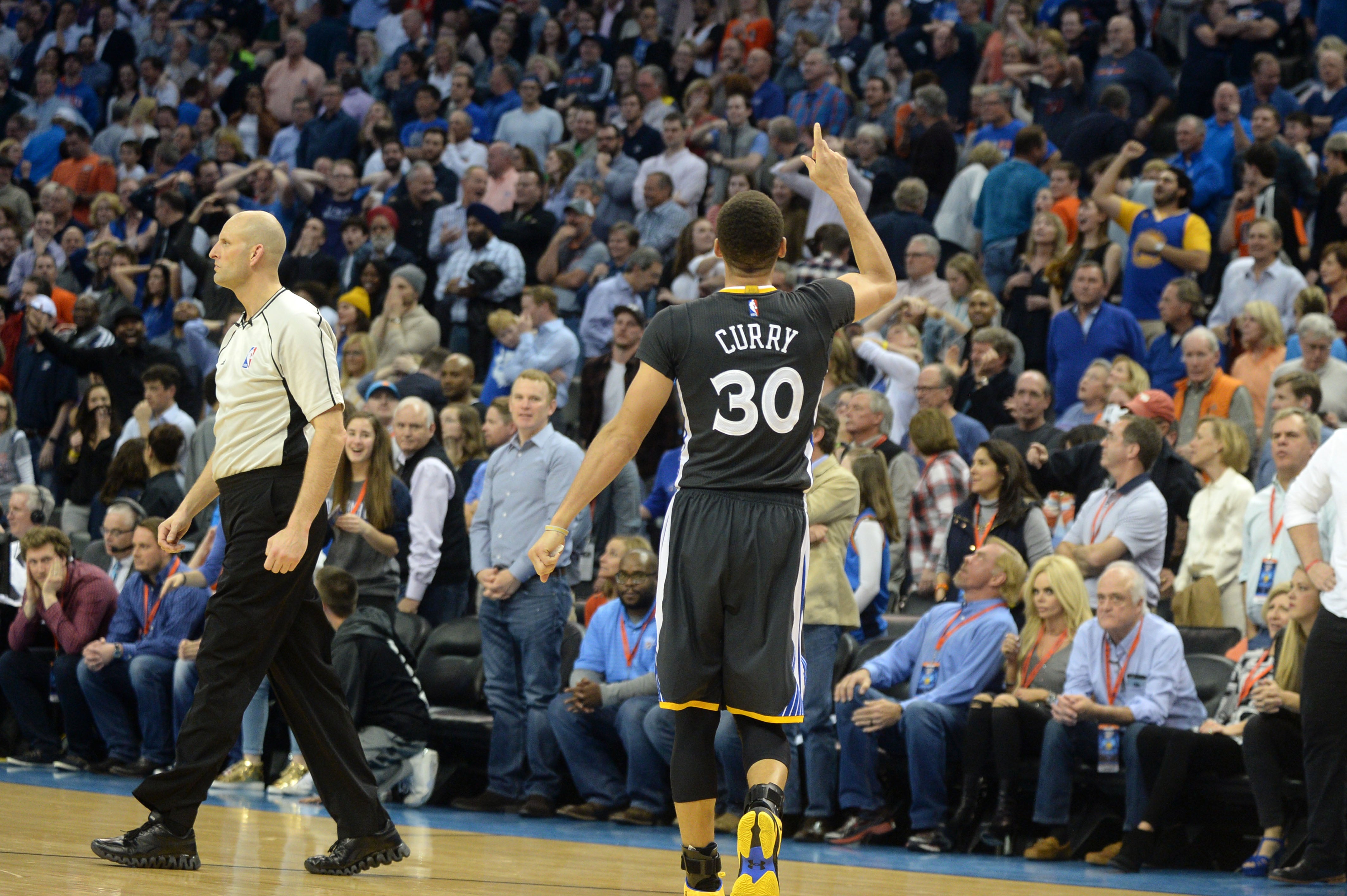 Hello, friends. Got a little basketball game for you over here today. We’re not talking H-O-R-S-E or 21 or Knockout. This is a different kind of game. What we’ve got here is a quiz – a quiz about a player who would be breathtaking and unstoppable in any of those competitions, just as he would be in the conventional basketball games that matter.

You game? Or should I say, are you in like so many of this mystery player’s 25-foot jumpers off the dribble? Good, I knew you were.

If you’re a hoops aficionado of a certain age or tuned in to the golden feats occurring regularly in the NBA this season, solving this should be as easy as dunking off a trampoline.

Here’s how it works: I’ll give you a quote about this player, with the name of those speaking or referenced redacted or hidden in a link. There will be five quotes in total. Every quote comes from a single, superb profile on the player that ran in Sports Illustrated. Bonus clue: the player was featured on the cover that particular issue, wearing his gold jersey under his warmup jacket.

All you have to do is tell me the player’s name. Easy, right?

I’ve already given you subtle clues just out of sheer generosity. You’ll bury this like … well, here comes the 25-foot jumper simile again.

Here goes. Knock it down …

1. “I never knew which way he was going,’’ said [an opposing star]. “He puts you in a triple-threat position. You don’t know whether he’s pulling up to shoot or to pass, or whether he’ll keep driving inside or what. Then, which side? Where? He’s everywhere. Give him one step and it’s over. And I think he’s the best shooter in the country.’’

I mean, that sounds like a player with whom I am familiar. And I don’t mean Kendrick Perkins.

2. In the meantime, he will go on shooting and scoring and dazzling the daylights out of a game that hasn’t seen this kind of talent in some time. The other day a friend came upon him sitting alone in the team’s gym.

Just [him] with his ball and the baskets. Just him thinking. “It’s all happening so fast,’’ he said.

This is what happens when you’re beating the bejeezus out of an entire sport.

Beating the bejeezus out of an entire sport? No,I guess it probably is not a Joel Anthony reference, now that you mention it.

3.His huge numbers are nearly as impressive as his humility and the eagerness with which he strives for perfection.

4.[His coach] speaks of his’’magnificent feel’’ for the game and admits he was “overcoaching’’ him until midway through [a 50-point game]. At that point the coach sat back and flicked his wrist, signaling … to keep shooting. After the player spent a couple of minutes passing off, [the coach called timeout to order him to fire away. “I want to get everyone involved,’’ the player said. “I feel funny taking so many shots.’’ His brief shooting hiatus cost him a possible 70-point night.

I’ve got it. It’s Knicks great Jimmer Fredette! Fredettesanity for all! What? Not him either?

5.Comparisons with [the] beloved gunner, the late Pete Maravich, have also accompanied his ascension. But with his bountiful, bewildering fakes, his sudden leaps and his lightning-quick release …

All right, I’ll stop. Enough with the clues and the ruse. Have you got it? Do you know who this is?

It sounds a hell of a lot like the best show in sports right now, Steph Curry.

It’s not. Take it away, Zen Master.

Jackson got a lot of the usual nuance-free internet grief for this comparison, and while in the moment it was tough to tell whether he was trolling, out of touch or truly believed it at the time – it turned out to be the latter – the truth is that he was absolutely onto something.

In fact, would suggest only this alteration to his observation. Curry is not reminiscent of Abdul-Rauf, who averaged 14.6 points per game and shot 35.4 percent from 3-point range in a nine-year NBA career.

He is reminiscent of the same player and person, but under a different name and during a different time.

Curry most reminds me of Abdul-Rauf when his name was Chris Jackson, the year was 1988-89, and his freshman season at Louisiana State was the most spectacular arrival into the college game since Pistol Pete Maravich brought his floppy socks and no-look passes to the same campus a generation before. Ben Simmons has had a fine freshman year. He’s the junior varsity compared to what Jackson did at LSU, averaging 30.2 points and 4.1 assists per game as a freshman while shooting 38.9 percent from 3-point range.

Abdul-Rauf, who converted to Islam in 1991 and changed his name in ’93, had a controversial and inconsistent NBA career. But if you remember him at LSU – the 53-point game against Florida especially — if you really remember him, you know.

In terms of aesthetics – the threes he’d pull up and swish from another zip code, the clever dribbling that freed him from the clutches of any defense (the Georgetown player marveling in that first quote above is Georgetown’s Alonzo Mourning), the highlight that would somehow trump the recent highlight, he is the closest thing I’ve ever seen to what Curry is doing now.

Now, of course you have to take context and competition into consideration. Jackson did this more than 25 years ago, in college basketball, in the Southeastern Conference, and not for a 53-5 defending champion that is tearing up the NBA in a way so entertaining that it’s as unfathomable as it is fun. Jackson was more physical than Curry – he was a surprisingly adept dunker – but he was not nearly as efficient and not quite as electric, and no one in this galaxy can match Curry as a shooter (craziest stat: He’s 32 of 47 from between 28 feet and halfcourt this season).

I understand that people who don’t remember when Chris Jackson was a marvel may still find this ridiculous. Curry is adored, and every morsel of adulation is deserved. Warriors games are appointment viewing. I love the NBA and have even when someone was ruining the league (Pat Riley, early ‘90s, it survived), but there hasn’t been a superstar player this fun since Larry Legend was in his heyday. No one has ever done what he is doing, and he sure seems to have a lot of fun doing it.

I think people believe he is beyond compare, and in the best sense he is. But considering Chris Jackson’s lesser scale of the competition and recognizing that what we’re witnessing now is of an entirely different magnitude, this is also a truth: What Phil Jackson tweeted was not absurd. It was correct. I can’t find evidence of writing it, but as someone who used to lift his hungover skull off the pillow on Saturday mornings – OK, afternoons – to watch Jackson and LSU play on CBS, it’s a comparison that crossed my mind before Jackson mentioned it.

And it should be noted that Phil Jackson’s opinion has been seconded by someone who played for him, against Abdul-Rauf, and has some fairly decent insight into what Curry is achieving now:

Oh, and before we close this case for good – the verdict being that no one is Steph Curry, but that traces of Chris Jackson’s game are evident in Curry’s style and skills repertoire – I suppose it should be noted that even then there were grumpy older men then who could barely mask their envy.

This quote is from the aforementioned SI story, after Jackson had lit up Georgetown:

Another Hoya, Charles Smith, who played point guard on the U.S. Olympic team, was not so magnanimous. “Jackson? He’s a real player, that’s all,’’ said Smith. “Hey, I’m a senior; he’s a freshman. Go ask him about me. I’m tired of answering questions about Chris Jackson.’’

All these years later, I’m glad Curry, with an assist from Phil Jackson, has given us a reason to talk about him again.