I’ve been doing this sports media gig for more than a dozen years. I don’t know the exact numbers, but figure the math on that comes out to approximately 50 columns per year, or 600-plus over the dozen years, and well over 1,000 people interviewed, give or take a phone call.

Of this I can be certain: I have never interviewed anyone more precise in their language than Rachel Nichols.

I first met her while she was the field reporter for TBS during the Red Sox-Tigers American League Championship Series in 2013. For whatever it’s worth, remember being impressed with how engaging she was with reporters in the press room that she hadn’t met before. That is not exactly the norm from high-profile personalities in this business.

The most in-depth interview I’ve had with her occurred in April 2019, when the NBA program she hosts on ESPN, “The Jump,” was starting to gain traction. I remember that interview vividly, because Nichols had an approach to her answers that I’d never come across in another interviewee before or since.

When she didn’t like how she had put something, she would stop herself, say something to the effect of “Let’s start over with that,” and then would answer the question all over again from the beginning, with more meticulous wording to her satisfaction.

That interaction has returned to mind often since Sunday, the day New York Times reporter Kevin Draper dropped a bombshell story with new details and context regarding a July 2020 videotaped phone conversation between Nichols and Adam Mendelsohn, a powerful advisor to LeBron James.

During the call, Nichols complained that ESPN had decided to go with Maria Taylor as the host of its studio programming during the 2020 NBA Finals, accusing the network of giving Taylor the assignment because she is Black.

“I wish Maria Taylor all the success in the world — she covers football, she covers basketball,” said Nichols while telling Mendolsohn that hosting “NBA Countdown” is written into her contact. “If you need to give her more things to do because you are feeling pressure about your crappy longtime record on diversity — which, by the way, I know personally from the female side of it — like, go for it. Just find it somewhere else. You are not going to find it from me or taking my thing away.”

There’s an awful lot to unpack in those 74 words.

Nichols was right to note that ESPN, until recently, has a “crappy” record on diversity.

She was offensively wrong to imply that Taylor – a charismatic personality who has thrived in every role she’s had at ESPN – has received opportunities based on race rather than merit.

And there is little doubt that Nichols said, with her usual precision, exactly what she meant to say. She just never could have imagined there would be an audience for it.

The call was recorded, unbeknown to Nichols, by a remote camera that was in her room on the Walt Disney World campus in Orlando during the NBA bubble last summer. It was also recorded to a server at ESPN’s Bristol, Conn., headquarters. An ESPN staffer heard it, recorded it, and sent it to the website Deadspin last summer, but that site has little reach or clout anymore and the story was little more than a blip.

But it remained a point of contention within the walls of ESPN’s campus over the past year. Draper’s deeply reported article, which included details of behind-the-scenes admonishment of Nichols from ESPN colleagues Jalen Rose and Adrian Wojnarowski and coincides with the end of Taylor’s contract during this year’s NBA Finals and a tense negotiation, brought the story the attention it should have had in the first place.

When “The Jump” aired Monday, Nichols apologized briefly: “So the first thing they teach you in journalism school is don’t be the story. And I don’t plan to break that rule today or distract from a fantastic Finals. I also don’t want to let this moment pass without saying how much I respect, how much I value our colleagues here at ESPN. How deeply, deeply sorry I am for disappointing those I hurt, particularly Maria Taylor, and how grateful I am to be part of this outstanding team.”

Tuesday afternoon, ESPN announced its “NBA Countdown” team for the Finals. Taylor is hosting. Nichols is not part of it, with Malika Andrews handling the sideline reporter role.

“We believe this is best decision for all concerned in order to keep the focus on the NBA Finals,’’ the network said in a statement. “Rachel will continue to host The Jump.”

That seems the proper consequence for what she said a year ago, now that the story has caught up with her. But it doesn’t solve anything. Nichols and Taylor are both very good at the hosting job. They’re both talented and ambitious. And they’re both caught up in an ESPN culture that often pits women against each other for appealing roles because of limited opportunity.

The greater shame is that Nichols’s words to Mendolsohn give further fuel to the suspicion that white people who are outwardly supportive of Black colleagues don’t always say the same things behind closed doors. (Mendolsohn, who at one point in the conversation said to Nichols, ‘I’m exhausted. Between Me Too and Black Lives Matter,’ is going to have some serious explaining to do in his next conversation with James.)

It did not go unnoticed here that Kendrick Perkins spoke for at least as long as Nichols about the situation on “The Jump” Monday night. He was thoughtful and candid as always, supportive of both Nichols and Taylor, but both Perkins and fellow analyst Richard Jefferson shouldn’t have had to have been positioned as character witnesses.

I would have liked to have heard a deeper and more nuanced explanation from Nichols than the one she offered Monday. But I imagine she was exactly as precise as she wanted to be. Maybe the blunter discussion came when the camera was off. 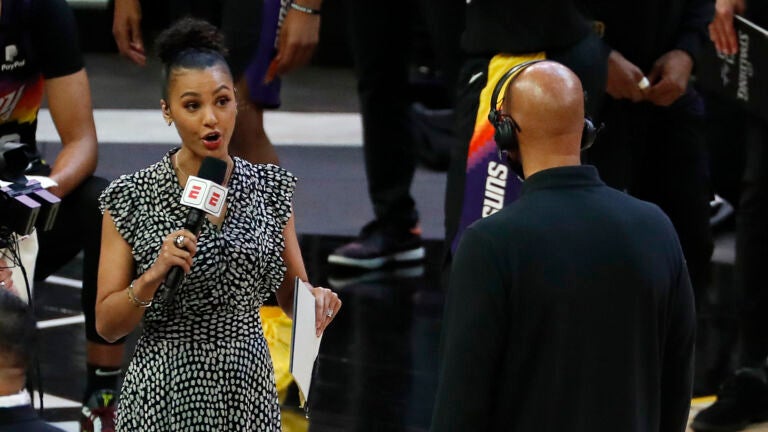