Do the clothes make the man? Hard to say, but Red Sox skies suddenly feel as sunny and cloudless as their now ubiquitous yellow-and-blue gear.

It’s been Mood Swing Summer at Fenway Park, and they’re seeking to extend the engagement to the fall.

A week ago Friday, they were about to lose three gut-punch, one-run games in 96 hours. Bullpen savior Garrett Whitlock allowed a walk-off. Trade deadline centerpiece Kyle Schwarber booted a routine grounder. They fell out of playoff position, white-hot Toronto in danger of disappearing from view.

The next night, Schwarber cracked a three-run double, and they haven’t lost since. Seven in a row overall, five in their alternate unis, and the question of the day is whether they can wear their Marathon gear through the World Series. (Answer: Yes! Unless they draw the Brewers, maybe.)

“It’s almost like these uniforms give these guys superpowers,” one team official heavily involved in the City Connect jersey project told the Globe. “It’s so loud, it’s so different [around the team].”

Facing the Orioles and Mets is a more tangible superpower, though the Yankees might disagree. This weekend’s visitors dropped four of six to their crosstown rivals this year — Boston swept four from the Mets — and, despite outscoring Baltimore by 39 runs across 19 games, somehow lost to baseball’s worst team eight times.

It might cost them October. So might that still-crazy last trip to Fenway, when Boston pulled three victories from thin air. So might this one, New York just a game up on the Blue Jays and two on the hard-charging Mariners, who take on more of that my-oh-my, never-say-die persona of their mid-90s ancestors by the day.

That’s the defining trait of this lot, I suspect. The Sox, Jays, Yanks, and Seattle are all no worse than the White Sox, who completed their AL Central coronation on Thursday. Boston had the AL’s best record in late July. New York ripped off 13 straight and 20 of 23 in August. Toronto won 16 of 19 as September dawned.

They all belong if we’ve decided the American League needs five playoff teams, but they’ve all got problems. The Yankees’ lineup was lost for months, and injuries tore their pitching apart. The Red Sox are too prone to chasing at the plate and goofing in the field, and feel like they’ve let things snowball on them at a couple critical junctures.

To me, Chris Sale being as promised has saved them in every way. He was the carrot at the end of the stick through the trade deadline, and his stellar stuff in seven starts now that he’s here, no matter the competition level, has given these Sox bedrock off which to bounce.

He’s also been a motivating voice, speaking up in both the players-only meeting during the August series with Texas and during the Tampa series a few weeks later. Sale is a leader, and he’s delivered in almost every form for a team that badly needed the boost.

“Chris was talking to the guys today, and he’s been saying all along, ‘Nothing is going to stop us,’ ” manager Alex Cora relayed to reporters. “He’s been very loud in the clubhouse just letting them know, it doesn’t matter what’s going on, we’re going to keep pushing, we’re going to be OK.”

Which he must deeply believe, given his refusal to get vaccinated for COVID-19 is the ultimate declaration of blind belief that nothing will take him or his team down.

It is impossible to tell the story of the 2021 Red Sox without including the virus in it, and that’s before whatever it has in store for their remaining time. And it is hard to believe that something else isn’t lurking, not after the road of the last six weeks.

Not with their best pitcher essentially riding without a seat belt, daring a close contact with an infected person to force him into a mandatory quarantine (as baseball’s policy requires for unvaccinated personnel) at the most critical point of the season.

That quarantine, not a COVID infection, is what initially shelved Christian Arroyo — who then missed nearly a full month when he became infected and dealt with more severe symptoms than others in the Boston outbreak. (Weird, that.)

If not for José Iglesias stepping in from the scrap heap as every bit the phenom prospect dreamed of a decade ago, Arroyo’s absence would be far more glaring, given how well he’s managed second base when available. As it is, with Iglesias ineligible for the postseason, the Sox will need to lean on a player in Arroyo who’s played three games in two months.

Arroyo was, and still somewhat is, one of the feel-good stories of the season. A first-round pick eight years ago who had finally found his place with his fourth organization. It feels like the sort of thing a player would be everything in his power to protect.

Alas, life’s not perfect. People aren’t, and vaccines aren’t either. We just have to make the best with what we’ve got, and these Red Sox have certainly done that.

October feels close, even if the three-game cushion on New York could completely disappear if this series goes sideways. The Sox have weathered it all to win 88 games with nine left to play. They’ll be there at the end, which is all any of us could’ve wanted out of this season.

They’ve got a chance to just about send the Yankees home for the winter. We can spare the handwringing to savor that, even if to a man and as a team, it feels like they’ve made it harder on all of us than they needed to. 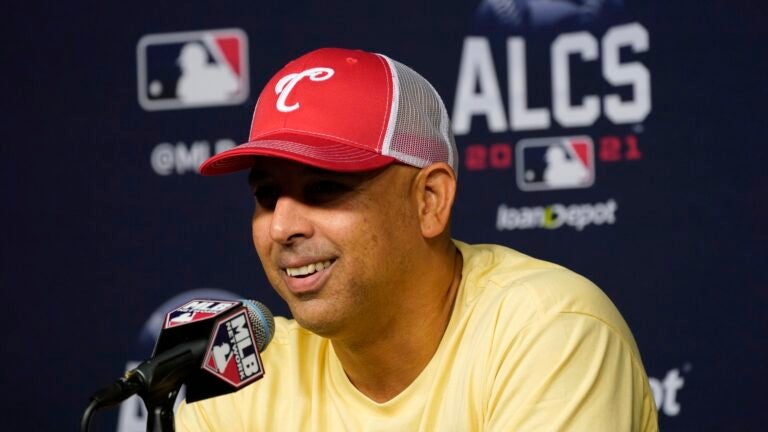