Making declarative statements off a scant nine innings is a recipe for disaster, even if they end seasons and define our cherished narratives. Consider the moment we’ll remember above all from Tuesday’s showpiece American League Wild Card Game.

If Giancarlo Stanton doesn’t crush his sixth-inning missile off Ryan Brasier all those 114.9 miles per hour, one of the 12 hardest hit balls at Fenway Park all season, it doesn’t clamber past Alex Verdugo to Kiké Hernández quite as fast. Delaying his pirouette heave to Xander Bogaerts, delaying the shortstop’s easy relay home, likely giving Aaron Judge enough time to beat Kevin Plawecki’s tag and get New York within one . . .

“That’s baseball, Suzyn,” John Sterling once noted in one of his observations he didn’t “see wrong.”

Thus, Tuesday, justly or not, was the momentum of two organizations continuing forward. The “work in progress” Red Sox go deeper into an October they were never supposed to sniff, and the “World Series or bust” Yankees go home again to marvel how it all went wrong.

“The league has closed the gap on us. We’ve got to get better in every aspect,” said Yankees manager Aaron Boone postgame, the fourth and final season of his contract, and New York’s 12th season since its 2009 title, over with a 6-2 Sox victory.

We’ve lived Boston’s unexpected road to the Wild Card Game, and how it was gravy before Nate Eovaldi threw a pitch. The Yankees weren’t supposed to be here, either. They were the de facto favorites of an AL lacking powerhouses, tabbed for high-90s wins and ascendant seasons for Gerrit Cole, Stanton, Judge, Aroldis Chapman, Sanchez, Gleyber Torres, DJ LeMahieu …

Tuesday was a failure from go, because their time was now. It has been for years, as spending big at the deadline for limited engagements with Anthony Rizzo, Joey Gallo, and Clay Holmes further reinforced.

It got them nine more innings and two more days. And now, it gets them the crisis we know too well. Spying what looks like a dead end cresting the horizon, and wondering what’s next.

“The Yankees are sort of at a point like we had,” 1990s Cleveland general manager John Hart told the New York Post back in March, when the drought was just 11 seasons. “You realize you have to break through.”

They needed Tuesday more than the hosts, and they played like it. Tabbed road favorites with their $324 million ace Cole and a rested, tested bullpen in line, their uber-patient lineup didn’t draw a single walk to impatient Boston’s seven. (Eovaldi didn’t so much as run a three-ball count.) Cole got six outs, hanging a changeup that Bogaerts pulverized for the first righty homer on the pitch all year, elevating a fastball that the patient Kyle Schwarber left the zone to smash 435 feet.

Red Sox fans were surely sick to theirs at various points, too scarred from win-or-go-homes that got away. (Alex Cora declared it the most uncomfortable game to manage in his career.) But when the moment arrived, Bogaerts and his teammates applied the pressure. And the big-money visitors wilted.

The Red Sox won it with outfield defense. With 11 outs from a bullpen array — Ryan Brasier, Tanner Houck, Hansel Robles, and Garrett Whitlock — that reads like a dare. The seemingly weekly “my bad” chest pat from Verdugo came after Boston’s only multi-hit night, and three RBIs.

“From the very first pitch, the whole team had a plan,” Verdugo said on NESN. “That’s just how you play, from pitch one to the last pitch. Energy, everything. It was amazing.”

Is it ever. We’re not a year removed from Chaim Bloom christening the season with the inspiring, “What we’re going through now is very painful . . . you have to be willing to do some things that don’t get you pats on the back when you do them.”

He threaded a needle I don’t even think he was trying to thread. Dismantled the Benintendi-Betts-Bradley homegrown outfield. Didn’t buy big over the winter after as desolate a season as we’ve seen in a decade. Didn’t overspend at the deadline; heck, he was barely allowed to spend. It is, and I suspect Bloom would tell you this himself, at minimum a bit of a fluke.

The Red Sox in the last eight all the same. It is a moment to savor for myriad reasons, but the Yankees remind of a prominent one.

Four years ago, Joe Girardi’s last team got within a game of the World Series with a club that felt on the rise. New York took its medicine, at least as much as the Yankees ever do, and reset.

To Judge, who won Rookie of the Year. To Luis Severino. Chad Green. Greg Bird. Torres. Sanchez. The plan was coming together ahead of schedule.

The plan never looked better. The base Brian Cashman built faltered in too many places, and the big-money supplements were the wrong ones, leaving a home-run-or-bust glacier that the Rays, Red Sox, and others ran circles around in 2021.

Baseball’s not always fair: Ask the Dodgers and their 106 wins, staring down a one-and-done in the National League Wild Card Game on Wednesday. Ask the Nationals, right alongside them as a team that felt like it would similarly never get that breakthrough.

Those, however, are problems for another day in Boston. Today will soon roll into Thursday, the Rays, and whipped cream on the gravy that is primetime, big-time baseball landing back in our laps so soon. 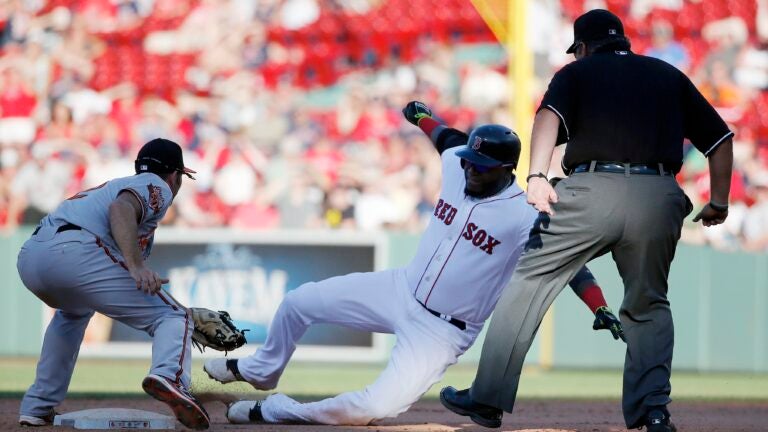 David Ortiz may become a Hall of Fame DH, but he may be one of the last