For most of us, Tuesday will be the Laz Diaz Game. I’d like to think no one is happy with that outcome, even the people who are happy with a 9-2 Astros victory and a 2-all series. Go poke an Astros fan and check if you’re so inclined.

Game 4 could be a defining moment for either team. It could be largely forgotten. It will be whatever remains in this American League Championship Series dictates it will be, which is to say it will be a “yeah, but” in New England until the ocean reclaims the land should the Red Sox not win two of the next three.

For now, from this address, let’s just call it a shame. A wonderful baseball battle that for most of its four hours didn’t look anything like a seven-run game. That existed around what ended up as 23 missed ball-strike calls from an umpire who routinely delivers an inconsistent, inaccurate strike zone until it couldn’t bear it anymore.

It’ll eat the whole season if we let it, but I don’t think we can continue until I get this out of the way: Was Nate Eovaldi’s ninth-inning, two-strike, two-out breaking ball to Jason Castro in the strike zone? It almost certainly was, and almost certainly should have given us a 2-2 game in the bottom of the ninth with the top of the Sox order coming up.

But where do we stop pulling strings on this Jackson Pollock canvas?

And why did Alex Cora punt at his best chance to get his all-world offense there down just 3-2?

It is, to me, already the great forgotten detail from Game 4. That Sox lineup going 0-for-9 with runners in scoring position, stranding 11 and not scoring after Xander Bogaerts’ first-inning shot onto Lansdowne Street? That’s the immediate rebuttal to the Eovaldi strikeout turned single.

“We had chances. I think we had chances early in the game, too, but, I mean, we’ve been so good for so long that you are going to have games like that,” said Cora, whose team had more walks (7) than hits (5). “We didn’t produce too much, but I think the approach was good.”

As for this idea using presumed Game 6 starter Eovaldi in relief is a grand debate? Classic results-driven second guessing. This is Cora’s October go-to, and a corner he painted himself into when he pulled Nick Pivetta after five innings (a stellar two hits and one run allowed) and just 65 pitches.

The logic, likely, is that it leaves Pivetta more available in relief. Which at least makes sense, even if Boston using six pitchers same as Houston did in a game where Pivetta thoroughly outpitched Greinke is something else. (The same thing happened in Game 2, when Eovaldi shone and each still used five.)

What remains less defensible is why Cora didn’t give Eovaldi one last batter on Tuesday night: Michael Brantley, with the bases loaded and the score still 3-2. Instead, he yanked Eovaldi for lefty Martín Pérez, losing with arguably his worst when Brantley cleared the bases with a first-pitch double.

Cora wasn’t asked directly about this postgame, but it’s easy enough to surmise his reasoning. He told reporters Tuesday that Eovaldi was in for one inning, and that “I wasn’t going to use him in extra innings because then I get tempted to use him for six.”

Eovaldi, on his third day post Game 2 start, had loaded the bases on 24 pitches: Double (that Hunter Renfroe had a decent shot at), strikeout, intentional walk, strikeout, the Castro single, and a full-count walk to José Altuve that included an, um, generous strike two. Brantley easily could be Eovaldi’s final hitter regardless of outcome: Inning’s over with an out, Sox are down two or more if he reaches.

Instead, Cora chose lefty-lefty, largely mirroring Game 1, when he tabbed Pérez for Brantley immediately after Houston made it 5-3 against Hirokazu Sawamura. That night, Pérez fell behind 3 and 0, missed on 3 and 1 by a foot and a half, and got a gift double play from a 96-mph fastball up in the zone.

Tuesday, Brantley didn’t miss it again. And thus, a best-of-three with Boston’s bullpen roughly as taxed as Houston’s, and the late-2021 version of Chris Sale between us and the Red Sox needing two road wins to keep the dream alive.

Just as Diaz is a “great dude,” as Will Middlebrooks tweeted, so is Pérez. Just as umpiring is a “hard job,” as Cora repeated postgame hours after he tore into Diaz during the game, so too is pitching with the season in the balance.

Maybe it wouldn’t have mattered, but welcome to the playoffs, where we stamp history into stone on such butterfly flaps. There’s a universe somewhere where Bill Buckner fields Mookie’s grounder, flips to first, and the Sox lose in the 11th anyway.

The Sox, like Atlanta in the National League, had myriad chances Tuesday to put one leg into the World Series. They couldn’t do it, by their hands and Laz Diaz’s eyes, perhaps in that order.

Now, we again get to check that heart we keep going on about around here.

“I mean, we’re feeling pretty confident,” Eovaldi told reporters. “Tonight we had to battle. We had to work. We were in the game all the way up until the ninth inning. Coming in, I mean, I think that’s been one of our strengths, being able to turn the page and come in tomorrow.

“We’re here tomorrow, and we got to make sure we win.” 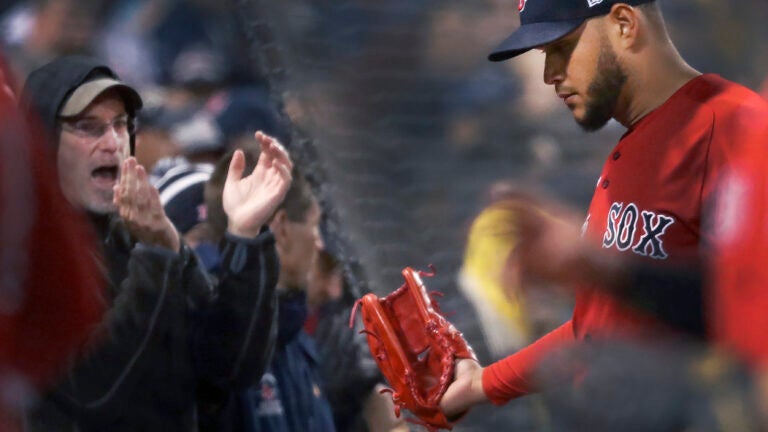