A private jet, the crimson “A” of the University of Alabama painted on its tail, lifted off from Tuscaloosa, Alabama, around daybreak Saturday with extraordinary cargo: cellular debris collected from the nose of Nick Saban, the football coach.

Three days earlier, Saban had announced that he had tested positive for the coronavirus. Now, still in isolation hours before second-ranked Alabama was to play third-ranked Georgia, Saban knew the specimen aboard the plane was his diagnostic lifeline to the sideline. If a laboratory in Mobile, Alabama, reported that the sample was negative for the virus, Saban, who had asserted that he had no symptoms and had repeatedly tested negative after his initial result, would be allowed to leave isolation a week early and coach in the prime-time game.

And so it was. Hours after a final negative result — and with no small help from a rule change that Southeastern Conference leaders approved six days before the positive test that shocked Alabama — millions of people watched on television as Saban led the Crimson Tide to a 41-24 victory.

The episode underscored two aspects of the response to the virus: Even the most rigorous tests — in this case a polymerase chain reaction, or PCR, widely considered the gold standard of infectious disease diagnostics — can falter. And, more than seven months into the nation’s coronavirus crisis, access to testing remains inconsistent, except among America’s elite.

While tests remain scarce in many communities, and too expensive to allow some leagues and universities to compete this fall, they have more than once helped break a prominent figure out of isolation.

“It’s a reminder of the stark disparity between the haves and have-nots,” said Dr. Ashish Jha, dean of the Brown University School of Public Health.

Alabama’s football program is clearly one of the haves. Anchored by one of the most celebrated brands in college football — the university claims 17 national championships, including five during Saban’s tenure, now in its 14th season — Alabama’s athletic department is among the country’s wealthiest. Bryant-Denny Stadium just had a $107 million renovation, and Saban is to earn more than $9 million for this season.

As the pandemic has strained athletic finances on campuses nationwide, it has, in some ways, put Alabama’s resources and football obsession on greater display. The SEC, for instance, requires its football teams to be tested at least three times a week under a protocol that hinges almost entirely on PCR testing, one of the most accurate and expensive techniques on the market. But Alabama opted for daily screenings of its football players and coaches.

Early last Wednesday afternoon, Saban learned that one of his PCR tests, which had been processed at a local laboratory, had come back positive. He headed home, oversaw practice via Zoom and held a news conference from afar, saying he had been “very surprised” by the result. (Alabama declined to comment beyond Saban’s public remarks and the statements the athletic program issued last week.)

With the case count around the football complex low — only Saban and the university’s athletic director tested positive, according to Alabama — and Saban an evangelist for masks and physical distancing, people in Tuscaloosa and elsewhere wondered whether that Wednesday test was flawed.

PCR-based tests for the virus hunt for specific stretches of genetic material, which they can copy repeatedly until their targets reach detectable levels. That makes it easy to identify the virus, even when it is scarce, and difficult to mistake something else for the pathogen. But as with any procedure, mistakes are possible.

Differences in the way the test samples are handled, processed and analyzed can upend results. Pressure to speed up the turnaround time for results could also make it harder to keep machines running in tiptop shape, or to ensure consistency from test to test.

“The most likely culprit was probably some sort of contamination,” possibly from a nearby sample that came from someone who actually had the virus, said Sarah Jung, the scientific director of clinical microbiology at Children’s Hospital Colorado. “This is detecting things we can’t see. That makes it all the more difficult.”

Mishaps are also bound to happen during a flood of tests. Alabama’s athletic department has said little about its testing throughout the pandemic, but the football program is administering at least 120 screenings a day, Saban suggested on ESPN on Saturday. The SEC’s 14 athletic programs are collectively running thousands of PCR tests every week.

“It’s a game of numbers,” Jung said. “I’m not saying it’s inevitable, but when groups like this test a lot, the chances for a situation like this to occur increase.”

Even under ideal circumstances, the best products will occasionally fail, Jha said.

“There is not something that is 100% perfect,” he said. “That’s why you do confirmatory tests.”

Alabama swiftly began its investigation into Saban’s positive result. There were medical reasons to try to confirm the result, but urgent football ones, too.

Less than a week before Saban said he had tested positive, the SEC’s chancellors and presidents had approved an update to the league’s medical protocols. Under the new policy, an asymptomatic person like Saban who tested positive for the virus could take another PCR test within 24 hours. If that test yielded a negative result, the person could take two more PCR tests, each separated by 24 hours. If all three results were negative, the player, coach or staff member could return to athletics.

It is unusual to administer a follow-up screening after someone tests positive by PCR, and the Centers for Disease Control and Prevention recommend that such a result send an asymptomatic person into isolation for 10 days.

But in the weeks before Saban’s test, the conference had an experience with a false positive involving a soccer player at Texas A&M, Sports Illustrated reported. And the league’s medical experts had also begun to worry about the potential public health effects of an unchecked false positive: a person’s being dropped from routine testing and perhaps acquiring a sense of invincibility that they could no longer contract the virus — potential fodder for an outbreak, should that person be exposed.

“The repercussions for that false positive aren’t just for that athlete,” said Dr. Catherine O’Neal, an infectious disease specialist at Louisiana State University and a member of the SEC’s medical task force. “It puts the entire team at risk.”

Still, O’Neal said she had worried about endorsing a protocol that “debunks a test result.”

“There’s so much attention around the validity of these tests, and for us who work in health care, just convincing patients to trust us and trust getting tested has become a struggle,” she said. “We don’t want to give the perception that we don’t believe these tests.”

The tipping point, she recalled in an interview Tuesday, had been “the increased awareness that false positives do occur.”

Despite the slight variances of the SEC’s new protocol from others’ guidelines, outside experts said that a lone positive result among so many negative PCR tests was almost certainly inaccurate.

Rules made clear that Saban could not coach, even from home, if he had the virus. If Alabama wanted Saban in charge against Georgia, the new approach was its only option. And even if the plan worked, it would not be clear until sometime Saturday, the day of a game long seen as one to shape the race toward the College Football Playoff.

Less than 24 hours after the positive result, Saban took the first of the three SEC-sanctioned tests he would need to pass to exit isolation.

His first formal follow-up tests, conducted around 7 a.m. Thursday and Friday, showed negative results, as did two other PCR tests that Alabama ordered “out of an abundance of caution” at another lab. Alabama announced the first SEC test’s results, and ESPN reported the findings of the second as it broadcast from Alabama’s stadium Saturday morning.

Word had already begun to circulate through the SEC that Saban might prove eligible to coach.

Driving the last specimen to Mobile would have taken more than three hours on game day, potentially stripping Saban of precious time with his team. So Alabama athletics turned to its speediest option: its jet.

Before noon in Tuscaloosa, with the Crimson Tide Foundation’s plane already long gone from Mobile, the decisive report arrived. 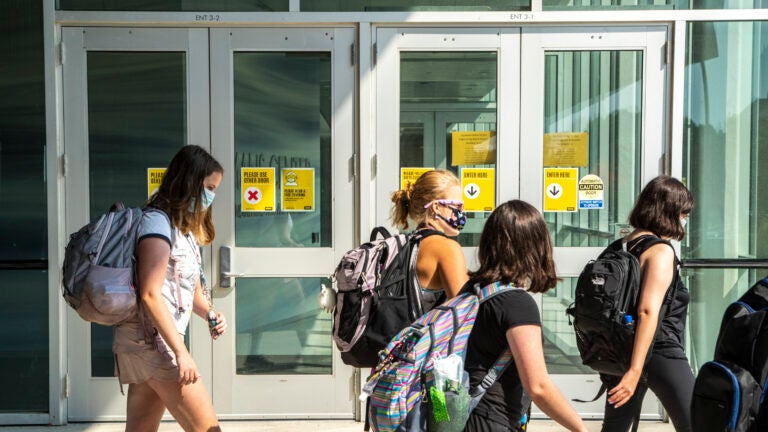 With students back on campus, many faculty members are worried about COVID — and pushing back