In 14 seasons with the Red Sox, David Ortiz has let his bat do the talking on the field and his gregarious personality fill in off of it. Below is a look back at some of the slugger’s most quotable moments.

1.“I’m happy to be playing here. I hope we can get something going and beat the Yankees.” – after signing with the Red Sox, Boston Globe, 1/23/03

2. “Well, I tell you, one day I was driving from my house to the stadium on a work-out day and I saw a big sign on the street that said ‘Keep the faith.’ And I saw it was a photo of Manny, it had the big smile. I just parked in front of the photo and I just sat down for a minute and just thought about it, you know, we’ve been through the whole year. Then I went to the field and I just expressed myself to my teammates about what the Boston nation has been waiting for us and what they expect from us.” – on the Red Sox’ historic comeback in the 2004 ALCS, MLB.com, 10/21/04

3. “I think one of the most exciting moments was when I saw Curt Schilling bleeding to death pitching out there. I saw his face and I thought, `Since I was growing up, Captain America was my hero, but now you are.’ – on Curt Schilling pitching through ankle injury in the 2004 playoffs, Boston Globe, 2/22/05 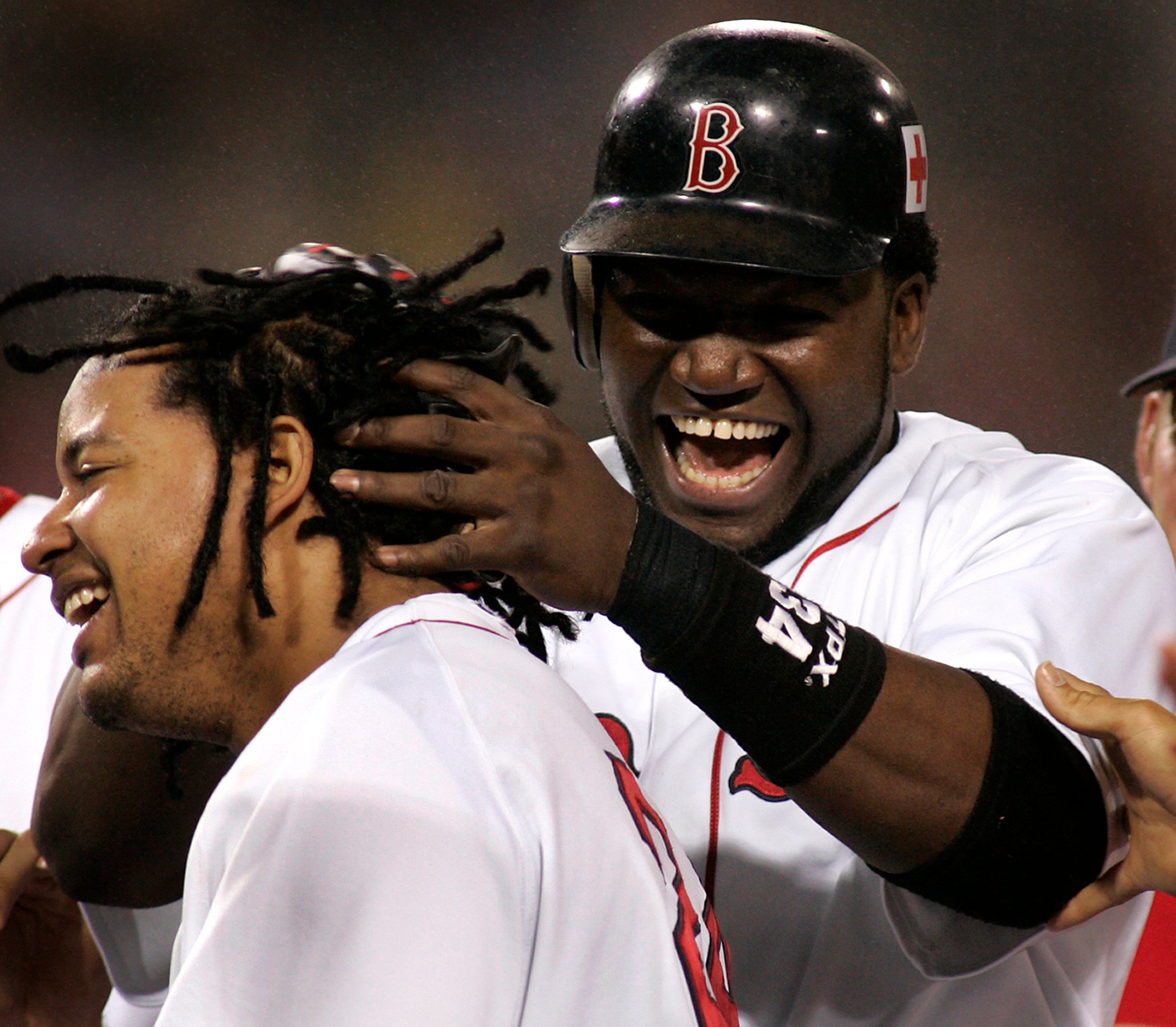 9. “When I started playing like it was Little League. I’m serious. One day, I wake up, `OK. I guess I got nothing to lose anymore. I’m way behind what I normally am. So I go to the field today, I’m not going to give a **** I’m just going to act like I’m in Little League.” – on breaking out of an early-season slump, Boston Globe, 9/26/09

13. “April is always a tough month for a lot of people. Why, I don’t know. But I just want people to drop it like it’s hot and stop talking to me about April.” – on his early-season struggles, Boston Globe, 5/1/11 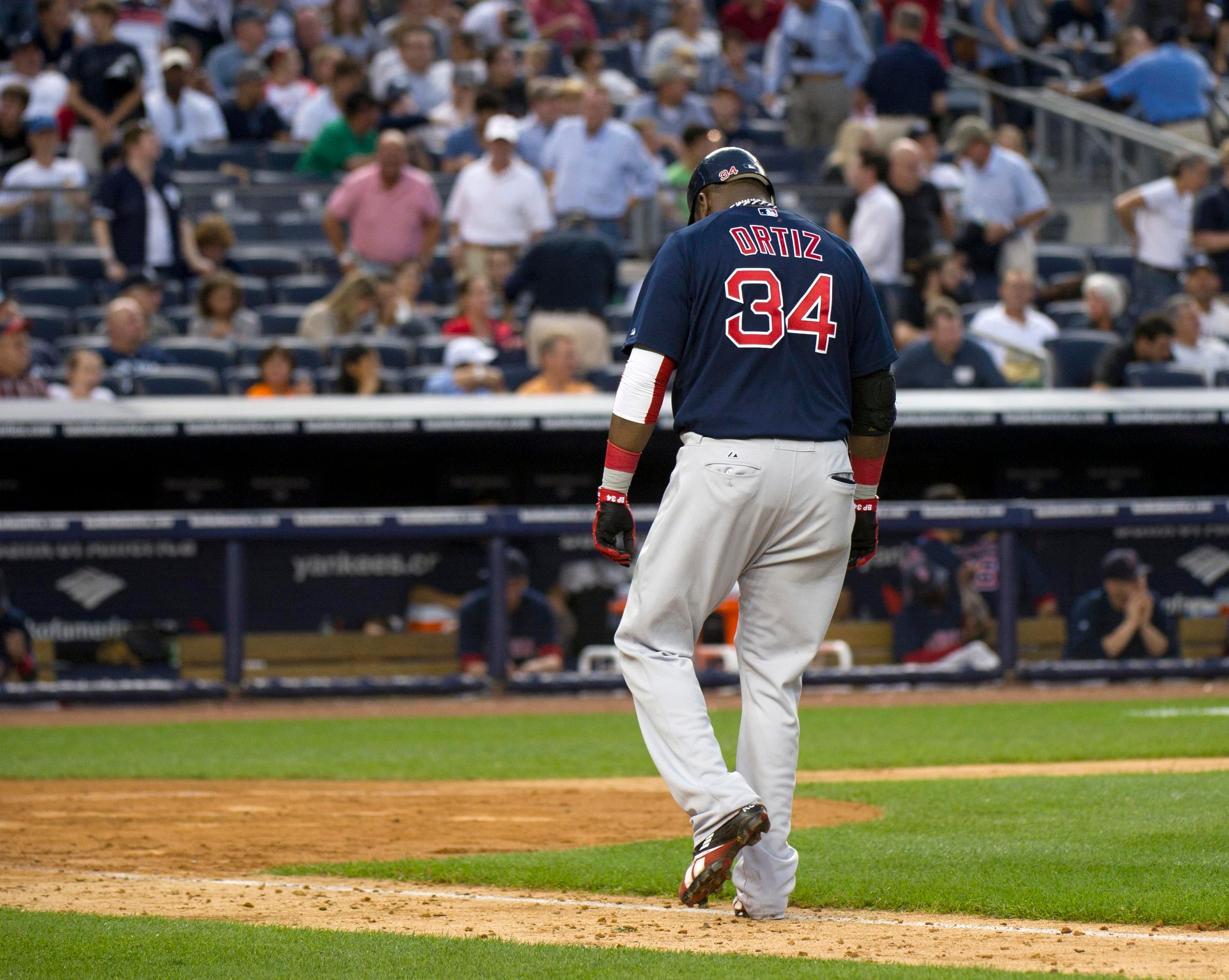 Boston Red Sox batter David Ortiz walks back to the dugout after grounding out against the New York Yankees.

14. “He’s come to be one of us. He’s getting familiar with the business. It’s not just only on baseball, it’s on everything. When your dad takes you around and you get used to it, it’s just like having any other business. You’re trying to teach your kid about the business, so when they grow up, they can run it.” – on his son D’Angelo becoming a baseball player, Redsox.com, 6/15/11

15. “Everybody was all over me, going like, `Hey, man, it’s Mike Tyson,’ and this and that. I was like, ‘C’mon man, I haven’t had a fight since I was in kindergarten; don’t be calling me no Mike Tyson.’ ” – on an altercation with Baltimore’s Kevin Gregg after a hit-by-pitch, Boston Globe, 7/10/11

17. “I think he heard the big elephant coming. He was shaking when I was coming in.” – on Twins catcher Joe Mauer dropping a relay throw with Ortiz running towards him, Boston Globe, 8/9/11

“He’s come to be one of us. He’s getting familiar with the business. It’s not just only on baseball, it’s on everything. When your dad takes you around and you get used to it, it’s just like having any other business. You’re trying to teach your kid about the business, so when they grow up, they can run it.”

19. “It’s fun. But I’m going to be like the Godfather and just sit down and watch.” – on not participating in the Home Run Derby after winning the previous year, Boston Globe, 7/2/12

20. “First of all, when I first heard about that, I started saying, us as baseball players, we might be the dumbest athletes out of all the sports and it’s because there’s a history of players doing things like that and getting caught.” – on a report of MLB players being linked to steroid use, Boston Globe, 2/13/13

23. “I used to have a trick every time we went into Yankee Stadium, especially in the playoffs. I’d walk out to the on-deck circle and look into the crowd and pick out the craziest guys there. I’d find the ones that were screaming all kinds of stuff at me, and I’d look them right in the eyes. It was like a game — see who blinks first. Then I’d turn to my dugout and say, ‘Hey, watch this. I’m gonna hit this one to the choo-choo train.'” – The Players’ Tribune, 3/26/15

25. “Listen, bro: If you can hit a baby doll head with a broomstick, you can hit an inside cutter. You don’t need a batting cage in the Dominican. You just have to love the game. And you need to be able to fight off your sister when she comes looking for her baby doll.” – on using a makeshift baseball as a child, The Players’ Tribune, 9/23/15

“They call me Super Papi. That’s right. Put it down like that.”

26. “People want to talk about old school. I am old school. How many (expletives) are in the game right now who played in 1997 in the big leagues?” – on people with “old school” values opposing home run celebrations, Boston Globe, 3/20/16

27. “Whenever somebody criticizes a power hitter for what we do after we hit a home run, I consider that person someone who is not able to hit a homer ever in his life.” – on everyone who opposes home run celebrations, Boston Globe, 3/20/16

David Ortiz watches one go during a game in 2005.

29. “Another f—ing guy everybody thought was better than me.” – on Julio Zuleta, who the Red Sox signed at the same time as Ortiz, ESPN.com, 7/8/16

31. “If they ever get up here, I want people to say to them, ‘I knew your dad, and he was a guy with huge power. But there was something better about him. He was a good person, a good guy.’ That’s what I care about the most.”– on his children hearing about his accomplishments, USA Today, 9/6/16

32. “To me, I think she never left; you know, that’s how I feel. I feel like I always have her around me. And trust me, there have been some times that I hit a homer and I’m running and I get to the plate, when I look up, I feel like I see her. It’s the kind of connection that I feel like I have with my mom and that never goes away.” – on his signature home run celebration in honor of his late mother, NESN.com, 9/19/16

33. “All I care about is [making] the game better, man. I want to sit down in five, 10 years from now, watch one of those kids and be like, Man!” – on him helping guys on the other teams he competes against, Sports Illustrated, 9/27/16

34. “That will be probably one of the things that I’m going to miss about this game. It’s competition, man. I don’t do this just for doing it. My family can tell you, man. Like this is my life.” – on loving the cat-and-mouse between the pitcher and the hitter, Sports Illustrated, 9/27/16

With games like Thursday's, the Red Sox keep making their start seem a little less surprising