BECKETT’S GRIMACE EXPLAINED (3:38, TOP 8, 9-5 Sox)
In the fourth inning, you’ll recall, Francona and a trainer visited Beckett on the mound after he fielded a slow grounder and made a face after throwing to first. He stayed in the game, and there’s no reason to be alarmed. What happened is, Beckett developed a callous on his foot. The callous got soft as his feet got sweaty, and it tore open. He pitched in a way that it didn’t hurt, but the fielding made the cut hurt. Nothing more. “It’s just a cut,” Beckett said.

Junichi Tazawa now in for the Sox.

ONE MORE IN (3:02, TOP 6, 9-4 Sox)
The Sox just scored another run, on a single up the middle by Angel Chavez, though Chip Ambres was thrown out at third base on the play. In the top of the inning, with Takashi Saito on the mound, the Sox made a stellar defensive play for the first out of the inning with Ivan Ochoa making a sweet play diving to his left to stab a liner.

BECKETT OUT, PAP IN (2:34, TOP 5, 8-4 Sox)
Josh Beckett came out of the game after throwing those 60 pitches over four innings. He allowed three runs on six hits, walked one, and struck out three. Jonathan Papelbon replaced him on the mound and promptly allowed a first-pitch home run to Denard Span.

WAY OUT (2:29, BOTTOM 4, 8-3 Sox)
Home runs for everyone! Jason Bay just got his, taking a pitch out to straightaway centerfield, over the giant back drop in City of Palms Park. It’s about 410 feet out to center, and this home run went way beyond that. It was a two-run homer, also scoring David Ortiz, who hit a line single to right.

SLIPPAGE (2:16, TOP 4, 4-3 Sox)
A moment of concern there. Josh Beckett was fielding a bunt from Carlos Gomez when he slipped momentarily. He still made the play to first base, but Terry Francona and trainer Paul Lessard went out to the mound immediately. Beckett is staying in the game, and appears to be fine. He finished out the fourth inning with 60 pitches, 39 of them strikes.

BACK ON TOP (2:05, BOTTOM 3, 4-3 Sox)
David Ortiz just took an 0-2 pitch from Scott Baker over the wall in right field. It was just his second hit of the spring — both of those hits are home runs. He had come into the game hitting .083 in a limited sample (because of the WBC). Ortiz drove home Mike Lowell, who had singled.

LEFT WITH A HOMER (1:52, BOTTOM 2, 3-2 Twins)
Even though he came into this game hitting just .091, Jason Varitek hasn’t been overwhelmed by the lack of results as he attempts to simplify his swing from the left side. Something was working today, at least against Scott Baker, as Varitek just lofted a solo home run out to right field from the left side.

BASES LOADED (1:47, MIDDLE 2, 3-1 Twins)
With one out — a strikeout of Brian Buscher — the Twins loaded the bases against Josh Beckett in the second inning. Michael Cuddyer doubled beyond the grasp of the diving Mike Lowell at third, then Carlos Gomez walked. Jose Morales dumped a single behind Jed Lowrie at shortstop to load the bases. Then Brendan Harris hit a swinging bunt into the infield, the ball was picked up by Beckett, who couldn’t get the out at home with a low, off-balance throw. Denard Span’s single by a diving Jason Bay drove in a second run. A third run came on an infield hit that Beckett whiffed on grabbing near first base. Beckett only got out of the inning without more damage when Joe Crede grounded into a 5-4-3 double play.

LEADOFF LIGHTNING (1:18, BOTTOM 1, 1-0 Sox)
Jacoby Ellsbury led off the game with a double over the head of right fielder Michael Cuddyer to lead off the inning for the Sox. He had come into the game hitting .250. Ellsbury went to third on a hit-and-run with Mike Lowell at the plate, then came around to score on a sacrifice fly to center by David Ortiz. “Swung the bat, I think, a little bit better lately,” Terry Francona said, of Ellsbury. “I don’t know what he’s hitting. I don’t care. Again, he’s another guy we’re trying to get his work in and get him ready for a long season, because he’s going to be a big part of what we do.”

CALLED K (1:14, MIDDLE 1, 0-0)
Josh Beckett allowed one single, to right field by Alexi Casilla, but he got out of the inning when he froze Justin Morneau for a called strikeout. Morneau, though, didn’t quite agree. He had already started walking to first base when home plate umpire Jeff Kellogg called him out.

GREEN WITH LUCK (12:51, PREGAME, 0-0)
Not only are the Sox wearing white uniforms with green writing and a shamrock on the sleeve, but the bases are green. And there is a little person on the field wearing a leprechaun outfit, complete with green coat and hat. Someone has put the number “15” on his back in white tape. I can’t imagine why…

MADE FOR MAYOR’S (12:36, PREGAME, 0-0)
Just in case you were wondering, Josh Beckett is undefeated in his three career Mayor’s Cup starts. He has a 2-0 record with a 3.75 ERA (five earned runs in 12 innings). So that bodes well for the Sox as they attempt to take the lead in the epic battle, which now stands tied at 1-1. 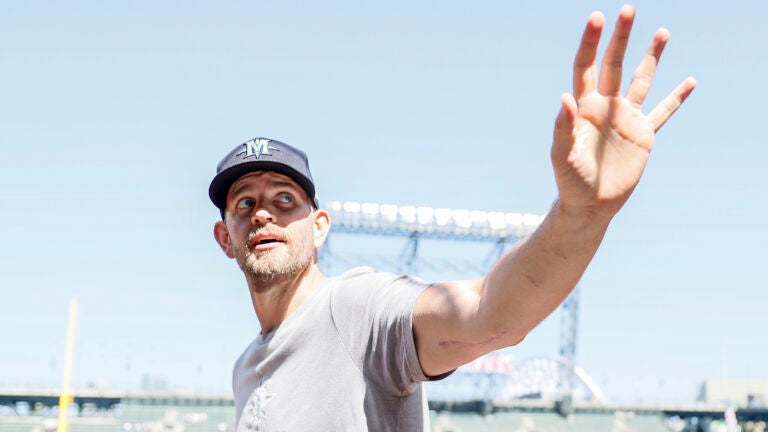