Red Sox slugger David Ortiz is proud of the bounce back he had after struggling in the early part of last season, said he has turned the page, and that he is ready to do some damage in 2010.

In addressing the media in Fort Myers after taking some batting practice and fielding drills today, Ortiz said his health was not an issue this offseason. “Everything went back to the old pace this year,” he said. “I started doing my training like I normally used to do and everything’s feeling good.”

Ortiz did say that he’s never been a strong starter. “I’m not a beginning guy, I’ll tell you that right now. I’m an end of the season guy pretty much my whole career.”

On this being the final year of his contract with the Red Sox, Ortiz, like Josh Beckett yesterday, is not concerned. “This is another year just like the others,” he said. “We have an owner, we have a GM, they’re the ones that are going to decide what to do.”

Ortiz said that others will decide if he has anything to prove this season. “I know myself, I believe in myself,” he said. “I have done it tons of times. For me, to do it, and get it done once again, it’s not a surprise. All you guys know me, all you guys know what I’m capable to do. Everybody know what I’m capable to do, you know? People struggle sometimes. People know how to bounce back? Not too many. So I’m very excited about this season. I’m positive. My focus point right now is do some damage.”

Ortiz talked about his physical condition coming into camp. “I feel good. I feel good. Do I look good?” Ortiz said. “[Swing] feels strong…. it’s pretty much part of the game that people worry about your body shape. I’m not going to look like Ricky Martin right now. I’m going to be the same guy. I might get stronger. I might try to stay away from injuries, but I’m not going to look any different. I wish I could look like Ricky Martin.”
Ortiz was asked if he felt confident about his strong finish to last season. “Last season was an experience for me, but at the end of the season when I sat down in my house, I was proud of myself,” he said. “And it was because there’s not too many people that know how to bounce back from that hole that I was in those first two months. And I asked myself, ‘how can I bounce back?’ And I have an answer for that. I just stay strong, not put attention to all the negativity that people sometimes bring around. I just stick with what I have. Thank God I have a whole bunch of teammates that have my back when I was really struggling and just a few pieces that I put together and came around. I definitely know that bouncing back like I did last year gave me more confidence and stronger for this year.”
Big Papi also talked about some of the negativity that was written about him last season. “People keep telling me they would like to see my career over, with this ballclub, but sometimes there’s a lot of negativity going around,” he said. “It’s a situation I guess that what people make their money out of it. That’s too bad, but in my situation, I know I’m just an employee here, it doesn’t matter how things are going, I try my best.”
Ortiz said he was hurt by the fact that some gave up on him quickly last year when he was struggling. “I think people gave up on me too early, too fast, start talking about age, and all that kind of stuff,” he said. “You listen to it for a minute. It was the same people that was clapping for you a year before and saying good things about you and minds change, that quick, I don’t believe in that. But it’s a one minute thing, that’s the way I see it. I’m just strong enough that I know how to deal with that, put that in the past.”
Does he use that as motivation? “Yep,” Ortiz said. “Why not?’
Ortiz said he is confident that he can put up the kind of big numbers that he did a few years ago. “Why not?” he said. “When I use a baseball bat every time I go to the plate. No question about it.”
The Sox DH admitted that he wasn’t totally comfortable heading into last season. “I’m not going to lie to you, I wasn’t feeling comfortable,” he said. “I guess you have a lot of games too early last year, important games, like the WBC, you wasn’t ready for, you putting pressure on yourself just because you want to produce and you’re not ready for the time and that cuts you off from doing what you gotta do at this time of the season to get prepared for the season. It’s a lot of things that you get caught into and next thing you know the season gets started the way it did for me last year, but it’s a totally different situation right now.”
Last season, Ortiz was concerned about having protection without Manny Ramirez in the Sox lineup. “Well, protection, in baseball, for a guy like me, is always going to be an issue,” Ortiz said. “No question about it. Whoever knows baseball, knows that. If you look at the Yankees last year, [Mark] Teixeira when did he start raking? When Alex [Rodriguez] came back. Manny [Ramirez] and me, we did the same thing. If I’m a pitcher and I had to face Papi and I gotta face any other guy, in a tough situation, I’m not sure I’m not gonna shoot for the guy that I feel is not gonna be a tough guy in a dangerous situation for me. That’s how baseball goes. And everybody knows that. So everybody needs protection in baseball… I’ve been doing that for years because I don’t have Manny behind me all the time, all the time I’ve been here when Manny wasn’t even playing I had to figure things out, you know, but it doesn’t go like that the whole season. At one point you need someone behind you to see pitches.”
Ortiz would not commit to saying that he is satisfied that he would have the protection he is seeking this season. “I’m not making out the lineup, I can’t tell you right now… ask Tito, he would tell you.”
Would he like to be reunited with Manny at some point down the road in baseball. “Yeah, why not? I saw him in the Dominican, he’s got longer hair [laughing].”
And now that Manny says this will be his last year with the Dodgers, maybe that reunion could come as early as next season. It’s highly unlikely, however, that the duo will be in the same lineup in Boston. 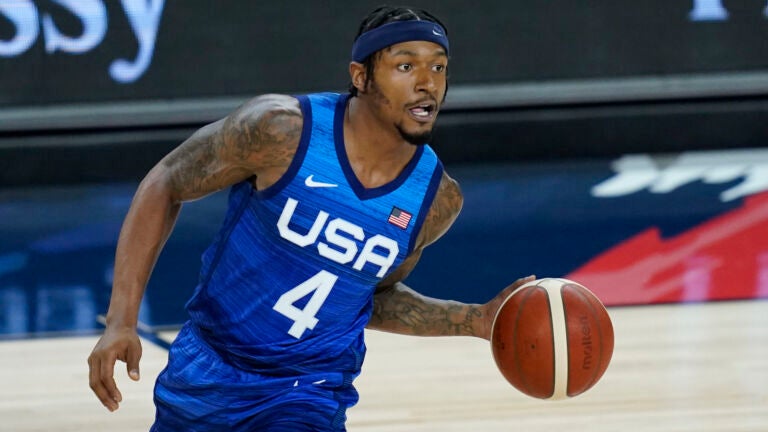 Bradley Beal reportedly opts to stay with Wizards. What does that mean for the Celtics?