The Red Sox lost to the Astros 3-0 here at Kissimmee. The Sox offense never got untracked against the Astros staff in a game that lasted two hours and five minutes.

Terry Francona was pleased with two things — Jon Lester’s outing where he allowed one run on three hits over four innings and Jason Varitek’s double, throw out of a runner trying to steal and a chance to catch Lester.

Varitek visited his dad in the hospital before and after the game and later spoke about the emotional situation he’s gone through.

“Today kind of was (tough). I went to see my dad last night. I’m going to see him again now before I go back (to Fort Myers). Everybody has been supportive and stuff but it’s my father so it’s not an easy time.”

Top of the 7th, 2:30, Houston 2, Red Sox 0
Michael Bowden was nubbed to death and wound up allowing a run on a double-play grounder by Carlos Lee which wound up scoring the second run.

Substitutions galore at this stage of the game. Ellsbury (0-for-3), Pedroia (0-for-3) and Gil Velazquez (0-for-2) are out, Bubba Bell, Oscar Tejeda and Ryan Khoury are in. Michael Bowden has come on to pitch.

Lester went four innings, allowed three hits, walked two, struck out two, threw a wild pitch. He threw 60 pitches, 34 for strikes. Scott Atchison replaced him in the fifth. Atchison retired the side with a little help from Varitek who threw out Humberto Quintero at second on what looked like a botched hit-and-run with Tommy Manzella.

A wild pitch by Jon Lester scored Carlos Lee with the only run. Lester put the first two men on – Carlos Lee with a single to center and a walk to Chris Johnson. Lester seemed to be getting out of it when he induced a DP grounder to Chris Shelton, but then he bounced one in the dirt with Cory Sullivan hitting that got away from Varitek, scoring Lee. Oswalt is done after four innings. He allowed two hits, no runs, one walk and had no strikeouts. He threw 45 pitches.

Pretty good pitchers duel between Oswalt and Lester. The only Red Sox Oswalt hasn’t been able to solve is Varitek, who has a double and a walk. Lester is coming out for the fourth inning and has allowed two infield hits and a walk.

Middle second, 1:21, 0-0
Josh Reddick started the game hititng .478 with one homer and six RBI. I speak to a lot of scouts during the course of a week, and the young guy most mentioned is Reddick who grades out very high with baseball people. His stature appears to be rising in the eyes of baseball people and it wouldn’t be shocking if his name came up more in trade talks. Reddick popped out in his first at-bat.

Easy inning for Jon Lester, whose delivery looked nice and easy. He retired the first two batters with grounders and then catcher J.R. Towles reached on an infield hit to third base on a hard hit ball that ate Gil Velazquez alive. Not many guys use their bare hands anymore, but Towles does not wear batting gloves.

Jason Varitek, batting third, stroked an Oswalt fastball into the rightfield corner for a two-out double. Oswalt looked nasty in retiring Jacoby Ellsbury with a grounder to first and striking out Dustin Pedroia. It was Varitek’s first hit of the spring.

Pre-game: The exchange of lineup cards had an interesting twist with Sox first base coach Ron Johnson (coaching third in today’s split-squad game) exchanging lineups with son Chris, who will play third base for the Astros today. Umpires seemed to get a big kick out of it. 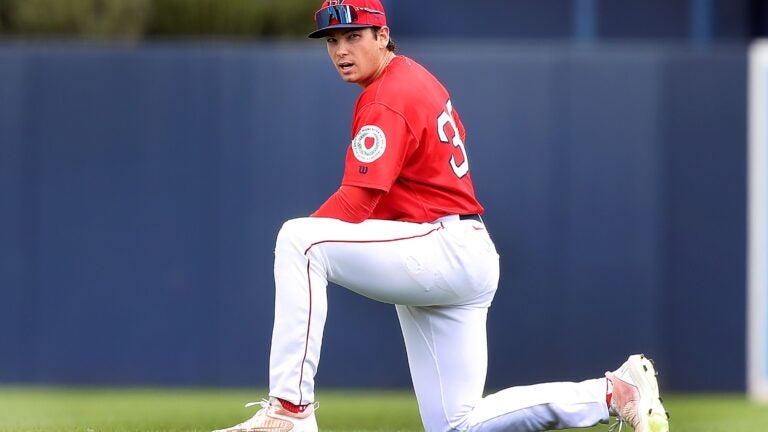