The Red Sox are back to .500 and now six six games behind the Yankees. The Sox have lost 12 of the last 14 meetings between the teams dating back to last season. Not much to say about this one other than this game other than that Josh Beckett suffered a meltdown in the sixth inning, giving up six runs in the latest of what have been a series of poor performances by the righthander.

Back with more from the clubhouse later on.

Pena singled but Swisher grounded into a double play.

Randy Winn singled, moved to third on a pair of wild pitches and scored on a sacrifice fly by Thames.

Meanwhile, the Sox are down 10-2 and people are blithely singing Sweet Caroline. Sometimes it seems like half the fans are here for the experience, not the game. But it’s like that in a lot of places.

Martinez singled but Hughes got Scutaro to ground into a double play to end the inning.

The Sox scored a run in the sixth as Drew doubled and scored on a single by Ortiz. Tim Wakefield started the seventh and retired the side in order. Martinez came in to catch him.

It’s not often you see an accomplished, veteran player lose his poise. But that is what happened to Beckett in that inning.

At various points in the inning, Beckett seemed to be rearing back and just throwing as hard as he could with little regard for where the ball was going. He hit two batters and nearly hit Cervelli and Teixeira.

Several of the Yankees, including the normally placid CC Sabathia, were on the top step of the dugout yelling at Beckett.

Beckett had struck out seven over the first five innings. So either his control or his professionalism abandoned him in the sixth. Either way, the Red Sox are down by eight runs and Beckett now has an ugly 7.46 ERA.

Eventful inning so far. A-Rod doubled to left. Cano was then hit on the left knee by a Beckett pitch. He went to first base but left after two pitches and appears to be in a lot of pain. Ramiro Pena replaced Cano.

Meanwhile, Beckett apparently crossed up Varitek. On a pitch to Swisher, Varitek set up as though he was expecting a curve. Beckett threw a fastball that hit Varitek on the left arm. There was a delay while Varitek was checked out by Terry Francona and a trainer.

McDonald singled with two outs and raced to third when Scutaro singled to center. Pedroia had a chance to get the Red Sox closer but chased a high 1-0 fastball and flew to center. Sox have left four on base in the last three innings.

Hughes is at 75 pitches.

The Sox punched back. Drew singled to right field and went to third when Youkilis singled to left. Ortiz then launched a ball to right field. It might have gone out a few years ago but tonight he settled for a sacrifice fly.

Hughes ended the inning by striking out Beltre.

Beckett allowed singles by Gardner and Cervelli after the home run but got Winn to ground back to the mound.

Beckett cracked first. Teixeira walked and Rodriguez singled with one out. Beckett struck out Cano for the second time then got ahead of Swisher 0-2. But he left a 2-2 curveball up and over the outer half of the plate and Swisher dropped it just over the wall in dead center for his sixth home run of the season.

Hughes is matching Beckett pitch for pitch. He walked Varitek with one out then struck out McDonald and Scutaro looking. Beckett has thrown 43 pitches, Hughes 41. The pitchers are dominating this game so far. We just played three innings in 38 minutes.

Beckett allowed a one-out single by Cervelli but got Winn on a force play before striking out Jeter for the second time. He has whiffed six in three innings.

Hughes sailed through the second inning as well. Youkilis lined to left, Ortiz struck out and Beltre grounded to first.

Beckett struck out Swisher swinging at a great curveball to end a 1-2-3 second inning. Beckett is at 27 pitches through two innings

Scutaro lined out to left, Pedroia popped up and Drew flew deep to right field. Good start for Hughes as well as his remarkable season continues.

Josh Beckett struck out the side, all swinging. Given their injuries, this is a weaker Yankees lineup than usual. If Beckett is on, this could be a good night for him.

Good evening from Fenway, where it’s a beautiful night for baseball and another episode of the greatest rivalry in sports. Hope you enjoy the game and please feel free to add your comments. 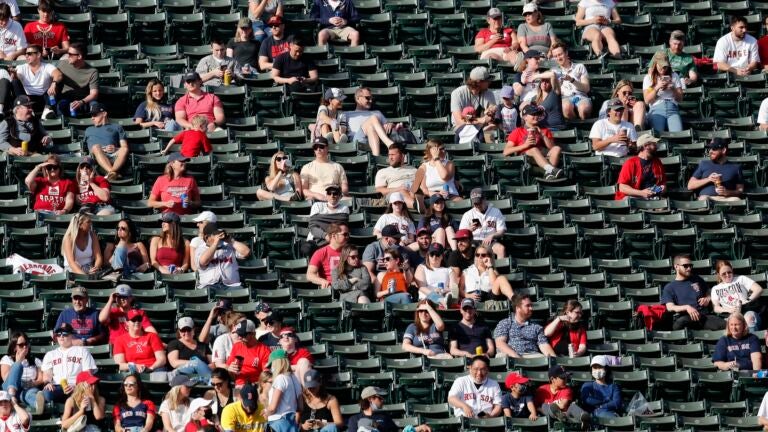