It wasn’t a classic but the Red Sox have won six of their last eight games. Back with more from the clubhouse later on.

Scutaro singled but the Red Sox could not add an insurance run. Papelbon in to try and close it out. He has converted 21 straight regular-season save chances.

Bard walked Bautista but Van Every made a nice running catch of a pop up before nearly tumbling into the stands. Then Beltre cut off a grounder and made a nice play to end the inning.

Lewis retired the side in order. He has set down 9 of the 10 batters he has faced. Bard in for the Sox now.

Youkilis reached on an infield single with one out. Ortiz was called out on strikes on a pitch was low and inside. He argued briefly but was not ejected. Beltre then hot a one-hop rocket that Lewis snared.

Okajima in for Lackey. Francona wants the Oki-Bard-Papelbon combo to try and finish this game off.

Lackey mowed down the Jays in order. He’s at 95 pitches and could go out there for another inning.

The Sox went in order against Lewis. Lackey starts the inning at 88 pitches with Okajima warming up. Sox would dearly like to get him through six.

Lackey got two quick outs in the inning before Gonzalez singled and Bautista homered into the Monster Seats.

Mike Cameron update: He was 1 for 3 with a double and a walk for Pawtucket. He scored from second on a single after the double, too. He’s scheduled to play center field tomorrow. It sounds like a good start to the rehab for him.

Hermida singled with two outs but that was it for the Sox. Events seem to have calmed down here at Fenway.

Lackey allowed two singles and Scutaro committed a throwing error but a double-play turned by Pedroia helped keep the Jays from scoring.

Van Every singled and took third on an error by Gonzalez. Pedroia followed with an RBI single. But with two on and two out, Youkilis struck out swinging. Sox have left six on base in three innings.

Lackey did exactly what he had to do and retired the side in order there. That’s how to follow up a big inning.

David Ortiz ripped a 3-1 pitch into right field for an RBI and ended the night for Morrow. That’s seven RBI in seven games for Ortiz. He’s

The Sox have scored three runs without the benefit of a hit. Hermida, Van Every, Scutaro and Pedroia drew walks to force in a run. Martinez grounded into what looked like a sure double play but second baseman Aaron Hill threw the ball away and two runs scored.

Lackey ended the damage there. But it won’t be a quality start for him. Only the second time he’s done that. Now he’s got to get in “keep the team in the game” mode.

His command was off early then the Blue Jays starting jumping on fastballs early in the count.

Lacket is taking a beating like he’s Josh Beckett. Overbay walked. Gonzalez then hit a ball off the top of the wall that was ruled a double after a video replay. No matter. Buck smashed a double down the third-base line that Beltre could not stop. RBI singles by Snider and Lewis followed.

The inning is still going on.

Scutaro walked, went to third when Peroia doubled off The Wall and two runs came in when Martinez singled to center.

Then Morrow struck out Youkilis, Ortiz and Beltre. He can dial it up to 98 with his fastball and throws a terrific slider along with a curve and change.

Lackey walked Hill but got Lind to ground to first and struck out Wells. There are a lot of empty seats at Fenway Park tonight. Looks like a lot of people passed on the chilly weather and decided to stay home and watch the Bruins.

Meanwhile, Mike Cameron fouled out in his first at-bat for Pawtucket.

We’re underway here at Fenway. We’ll also have updates on how Mike Cameron is faring in Pawtucket. Hope you enjoy the game. Go Bruins. 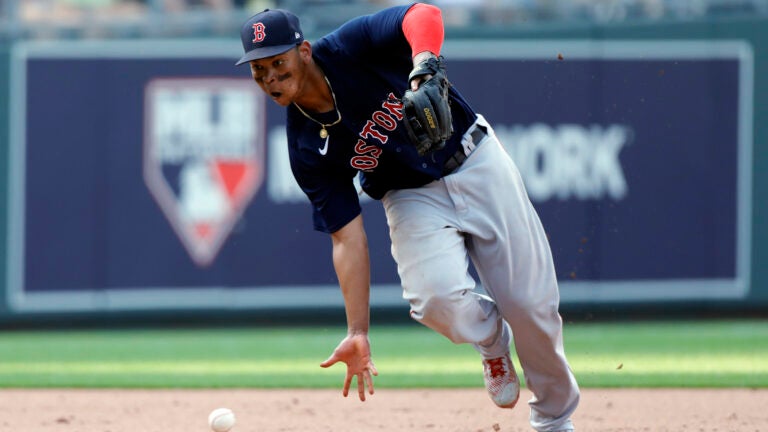