UPDATE: That’s it folks. David Ortiz comes out the winner, with Hanley able to hit only five homers in the final round. Ortiz is currently getting some more love from his teammates, as media swarms around him. He hit 32 total, with 21 in the first two rounds and 11 more in the final round.

That’s all from Anaheim tonight. We’ll catch you tomorrow for the All-Star game.

UPDATE: That’s 11 homers for Ortiz in the final round. Now it’s up to Hanley to best that. Ortiz is getting a bunch of congrats from his AL teammates (and his Red Sox teammates, including Victor Martinez). Ortiz is very popular among other players around the game, and it shows in situations like this.

BTW, those predictions from Torii Hunter and Adrian Beltre look pretty good at the moment. Ortiz didn’t tire at all throughout the competition.

UPDATE: Corey Hart takes an 0-fer in the second round. That means we’ve got a final of Hanley vs. Ortiz for all the marbles.

UPDATE: Ortiz comes out to greet Hanley with a high five after Hanley ties him with 21 home runs over the first two rounds. If Hart hits at least nine homers, then we’ll have a tiebreaker. If he hits seven or fewer, it’s Ortiz and Hanley in the finals.

UPDATE: Ortiz put on a bit of a show in the second round, finishing with a combined score of 21. That’s good for the top spot with Corey Hart and Hanley to go. Miguel Cabrera stands at 12 after two rounds, trailing Hart’s first round.

UPDATE: Miguel Cabrera inserted himself into the second round with seven home runs, leaving Corey Hart’s 13 as the top total for the round. Ortiz finishes third behind Hart and Hanley Ramirez.

Pretty lackluster HR Derby so far, in my humble opinion.

UPDATE: It wasn’t a long stay for David Ortiz in the No. 2 spot. He’s been moved back a peg by Hanley Ramirez’s nine homers. That brings up the final batter of the first round, Miguel Cabrera.

UPDATE: David Ortiz might not have liked how that ended, as he grimaced fouled one back for is last out, but he’ll be moving on to the second round. With just two hitters left to go, Ortiz is second with eight home runs. Not a bad showing from Big Papi.

UPDATE: Some late-game heroics from Matt Holliday, who hit four in a row with nine outs to end up second, just ahead of Nick Swisher. Holliday finished with five.

UPDATE: Nick Swisher, who was also booed at Angel Stadium, just put himself behind Corey Hart in the standings with four homers. I have to say that this HR Derby is moving at a glacial pace.

UPDATE: Finally! Corey Hart injects some power into the proceedings with 13 homers to pull way ahead of the other two participants.

As an aside, I have to say that watching the Josh Hamilton Home Run Derby at Yankee Stadium was one of the cooler things I’ve experienced as a baseball writer. I know that the HR Derby gets knocked a bunch, but that was simply an incredible display, almost awe-inspiring, if that’s not too over the top. But how many people remember that he didn’t actually win?

UPDATE: Vernon Wells didn’t do much better, getting just two homers. Perhaps they shouldn’t have let Ubaldo Jimenez pitch to the Derby participants?

UPDATE: Chris Young goes first, knocks just one home run. Good to see him not get shut out. Having talked to Jason Bay about the year that he recorded an 0-fer, it’s not a fun experience. Brandon Inge went through that too.

David Ortiz was announced with all the other competitors in the Home Run Derby. He got booed by the fans at Angel Stadium. Not entirely sure why that’s the case. [Edit: I get it. Just not sure why anyone needs to be booed at a Home Run Derby. Seems silly.]

Both Torii Hunter and Adrian Beltre picked Ortiz as tonight’s winner. We’ll see how accurate they are.

“I would definitely have to say Big Papi,” Hunter said. “That’s one of my favorite guys. He’s hot right now, I’ve been watching him swing. That’s the swing that he’s had for a while, and I could see him doing some damage, especially as a lefty in this ballpark. It’s impressive. A righty won’t have a chance at all.” 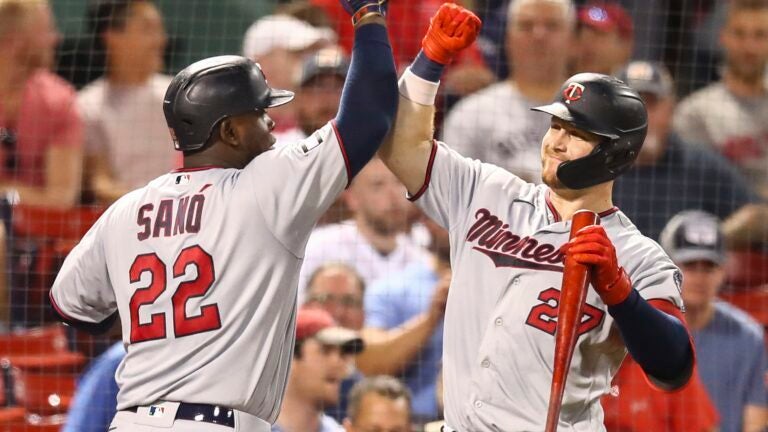