Adrian Beltre did his best to give the Red Sox a chance to win tonight. He hit two homers and drove in five more runs.

“He swung the bat good,” Francona said. “We needed to get him up there one more time. He’s a great player.”

(As an aside, how great would baseball be if every player had a one-year deal?)

But outside of Beltre, the Sox were 1 for 10 with runners in scoring position. They had 13 hits and only another loss to show for it.

Going 14-14 against the Indians, Orioles, Royals and Mariners is a bit of a disgrace.

“That’s the difference right there,” David Ortiz said. “We haven’t played well against those teams and we should be better. I don’t understand it.”

* Cleveland catcher Carlos Santana looked to have suffered a horrible injury in that collision with Ryan Kalish in the seventh inning. But he may have been lucky.

“He tested well with the trainers,” Tribe manager Manny Acta said. “They feel he doesn’t have any serious damage with his ACL or MCL. He’s leaving tomorrow for Cleveland to get an MRI.”

Kalish was shook up after the game and Terry Francona pulled him aside for a little talk.

* Speaking of Kalish, he is 5 for 10 with two RBIs and a walk in three games. He also made two terrific throws from left field, showing off the arm that had the University of Virginia wanting him to play quarterback.

Keep in mind that Daniel Nava looked like a Hall of Famer for a week before teams stopped throwing him fastballs. The pitchers enjoy dissecting a young hitter and then it’s up to the kid to make his adjustments.

* Tim Wakefield threw two scoreless innings on his 44th birthday. According to the Elias Sports Bureau, the last pitcher to throw on his 44th birthday was Gaylord Perry on Sept. 15, 1992. The last 44-year-old to play for the Sox was Yaz, who was 44 when he retired in 1983.

* That was the first time Jed Lowrie has played first base in his career.

* Yes, Tim Bogar had two runners thrown out at the plate. Even Terry Francona admitted that Bogar was too aggressive in the seventh inning when he sent Kalish to the plate with one out and the Sox down by four runs against the powerful arm of Shin-Soo Choo.

But I look at it like this: On the long list of problems the Red Sox need to fix, the third base coach is far down there.

* The PawSox belted Durham 12-0 tonight. Josh Reddick was 4 for 5 with two doubles, a homer and five RBIs. Jarrod Saltalamacchia was 0 for 4 with a walk in his debut. Robert Coello threw six shutout innings and struck out nine. Michael Bowden worked 1.2 scoreless and fanned two.

Thanks to everybody for reading today and for all your comments. Extra Bases is blowing up and it’s thanks to you.

Finally, good luck to Nate Taylor in his new job. Nate was a summer intern at the Globe and leaves later this week to start a full-time position at the News & Observer in Raleigh, N.C.

Nate helped out with a lot of Sox games this season and handled himself well. 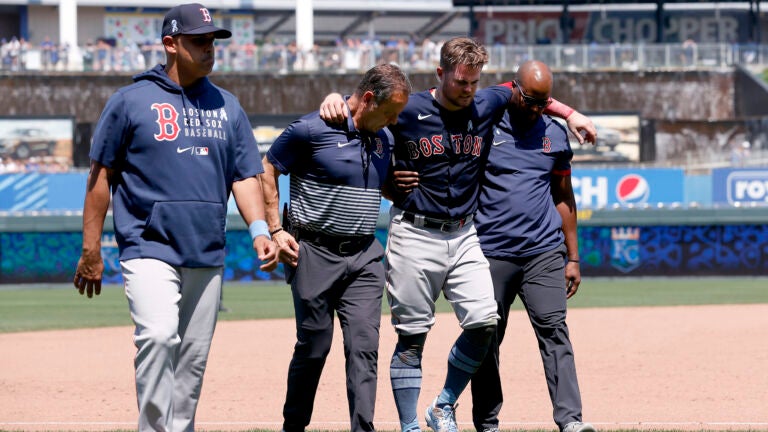