FORT MYERS, Fla — Carl Crawford said upon his arrival at JetBlue Park today that he was surprised to hear that John Henry was against the signing.

Henry had made the comments last fall in the context of trying to indicate that he stayed out of baseball matters and left those decisions up to Theo Epstein at the time.

Asked if he thought he needed to meet with Henry and get on the same page, Crawford said, “What page? You know, I don’t know, if he wants to meet with me we’ll have that meeting. I’m not too sure. I don’t know if he has plans.

Henry said via text: “Again, this wasn’t about Carl. At the time I was opposed due to too many lefties in the lineup and particularly in the outfield. Also, our two best prospects were lefthanded hitters. My answer was an honest, off-the-cuff response on a radio station to a false assertion that ownership signed him for offseason PR purposes.. This was a baseball decision I ultimately backed.”

Here are some of Crawford’s other comments to questions posed by media members this morning:

Was he aware of clubhouse problems? “I didn’t know about that (chicken and beer). I always thought team chemistry was good. Me personally it was fine. I got along with everybody. It was always a fun time. I thought it was a cool place to be.”

On team chemistry last season: “I guess you’re talking about chicken and beer. I’m on the field so I didn’t know what was going on with that. It was a surprise for me but like I say, pitchers have so much time on their hands and they’d been successful with how they’d done it. Who knows what they might have done. It didn’t really impact us. It wasn’t really like guys complaining. I don’t think it had a big role. When I heard the story, I couldn’t believe that you guys (media) knew about it. That was a surprise but it’s one of those things that was unfortunate it had to happen and you try to move on.”

He later said, “Guys are gonna rally around that chicken and beer thing and rally together. Stay positive. Hope for the best.”

On working this off-season to change his swing: “I think the batting stance was a little dramatic. I couldn’t figure it out and it got worse and worse and worse. Now I’ve tried to stay on top in what I need to remember. Hope my athletic ability takes over.”

Will he be motivated by last season? “It’ll definitely be a key factor and one of the reasons why I’m here (so early). I’m motivated to play well this year. I don’t want to think about last year because it was so bad. Nothing you can do will make up for it.”

On his surgically repaired wrist: “It’s been better. I really don’t know when it will be all the way healthy but it definitely feels better than what it was and I’ll continue to build up the strength up….. Bobby saw me throwing today, he didn’t even know I could throw. I’m not gonna rush it. I’m only gonna do what feels good. I definitely want to be back on the field as soon as possible so I got to make sure I do the right things.

Could he make it back by Opening Day? “I don’t know. In my mind the odds are good. I definitely don’t want to miss any games. My goal is to make it for Opening Day.”

When will he be able to swing? “It should be pretty soon. It feels stronger. I feel good about it.”

Was the wrist a factor all of last season? “I don’t know. I was out of whack in so many ways that the wrist thing was minor. I got a few shots in it so it was fine. I think I was just so far out of whack that I’m not sure it had anything to do with it.”

More on his wrist: “The thing is the rest of my body feels really good. I don’t think it’s a real big deal like everybody is thinking. I just think it’s gonna take a little time. If I thought it was dramatic I’d be worried. I don’t think this is a problem that’s gonna set me back.

Make corrections to your swing? “Most definitely. Went back and had a bunch of things to correct. I was able to think about it and saw what went wrong and hopefully I’ve corrected them. My mechanics were not where they should have been for whatever reason. It wasn’t normal. We worked on that. Hopefully it’ll be better.”

On Valentine: “I just met him today actually. Upbeat guy. Real smart guy. Actually looking forward to learning as much as I can from him. He’s been very positive and talks about stuff we can and can’t do. I’m looking for Bobby to have a real good impact on us.”

On ESPN comments Valentine made critical of his swing: “I don’t have feelings about that. That’s his job to say things on TV. I understand I’m playing for him as a manager now and I’m sure he doesn’t feel that way. It’s just stuff you have to say when you’re on TV so me and Bobby have no hard feelings. We share a common goal to help the Red Sox win. “

On last season’s struggle: “Last year was one of the toughest things I had to go through. For what ever reason I struggled. It was really hard to deal with. I had a lot of time to think and make corrections and I think it’ll be better. I watched tape. Worked with the hitting coach more. Just try to clear your head and put last season behind. That was bad. The main thing was to let that go and try to start over and do what you normally did.”

Excited to show fans the real Crawford? “Definitely exited to do that. Like I said, I put a lot of pressure on myself last year. I just need to stay relaxed and stay focused.”

What specifically did you see about your batting stance? “Just from my batting stance being too wide and too open and I think I shortened that a little bit. Seems like I was late all the time on the ball. Just trying to do a better job of getting ready. Little stuff like that. Compared to last year, it’s definitely different. It should help.”

Where will he bat in the order? “That’s the big question. Not sure where Bobby wants to hit me. Ideally I’ve always hit at the top of the order. I can’t do much [running] hitting behind Big Papi. Just have to wait and see.”

Did batting different spots in the order effect him? “I don’t know. Where I never did it before, it probably had an impact that I didn’t realize until later. Maybe it did and maybe it didn’t.”

Has he thought about the Robert Andino liner he couldn’t get to that ended Boston’s season? “As soon as it happened. It was over and over. It was all the time. So I had to forget it. It was a sore spot for me. I had that bad cringe in my body every time I watched it.”

Did he come in earlier than usual? “I think with my wrist being sore they wanted me to come early so they could monitor it a bit. Last year I came real late and I couldn’t get a good idea what was going on. I can get a head start and get a routine going and just feel comfortable about it.”

Goals? “I just want to get back to what I did in Tampa. Those numbers are reachable. I did it every year before last year. So I want to at least reach that.”

On one more year of the Boston experience: “It definitely helps to know what to expect a little bit so I can prepare a little bit better. I’m pretty sure there will be obstacles to come. After one year of it I’m a little better prepared.”

Did the big 7-year, $142 million contract have an impact? You never know until you sit back and think about it. It probably had its affect on me. You want to show you’re worth the money. The pressure builds up on playing in Boston. This year I have to find ways to get over that and play my game.” 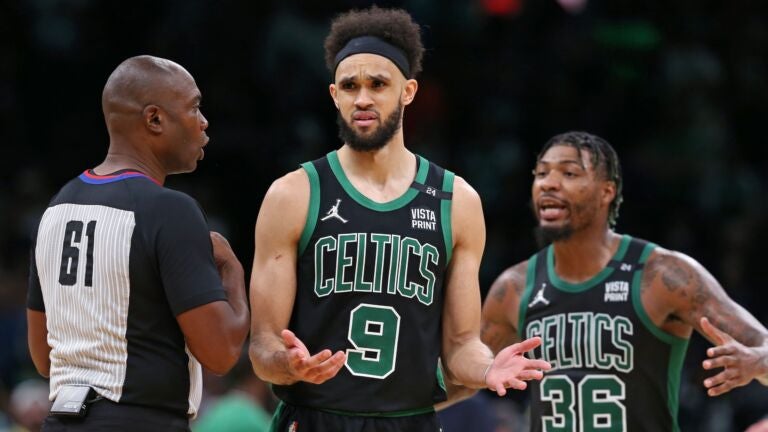