Rookie Allen Webster was blasted for eight runs in 1.2 innings while Felix Doubront came into relieve him and allowed six runs over 5.1 innings. A terrible pitching night all around for Boston, which allowed 19 hits.

Top 9th: Twins 15, Red Sox 8 – Junichi Tazawa is supposed to pitch the ninth but not trailing by six runs. But to get in some work, Tazawa got the call. He allowed a single to Jamey Carroll, single to Joe Mauer, hit Josh Willingham with a pitch and got Morneau to hit a sacrifice fly to score the 15th run.

Bottom 8th: Twins 14, Red Sox 8 – A Stephen Drew infield hit and walk by Pedro Ciraico got the Red Sox another run when Daniel Nava’s sac fly put another score on the board for the Sox.

Bottom 7th: Twins 14, Red Sox 7 – The Red Sox moved a touchdown and extra point away from the Twins when Dustin Pedroia scored on a Jonny Gomes’ sacrifice fly. Pedroia singled and moved to third on Mike Napoli’s single.

Top 7th: Twins 14, Red Sox 6 – Willingham was safe at first on a throwing error by third baseman Pedro Ciriaco. Justin Morneau flied out to center. Terry Plouffe singled to left. Doumit then singled to deep center (the hit was later changed to a fielder’s choice by the official scorer) into a double play first to shortstop to second to first. Strange play as Twins runners were frozen while watching Ellsbury field the ball off the wall. Plouffe passed Willingham and the Red Sox had an easy double-play, 8-6-4-3.

Bottom 5th: Twins 14, Red Sox 6 – Mike Napoli singled to lead off the fifth, but the next three batters were retired as the Sox just can’t seem to claw their way back.

Top 5th: Twins 14, Red Sox 6 – Horrible pitching by the Red Sox. Doubront struggles again. he allowed a leadoff double to Mauer (how many doubles would Mauer hit in 81 games here?) and after securing two outs, Plouffe singled Mauer in. Doumit singled and Arcia doubled in the second run of the inning.

Top 4th: Twins 12, Red Sox 6 – The twins loaded the bases off Doubront with a single by Doumit, a single by Arcia and a walk to Hicks. The run scored on Florimon’s double-play grounder.

Top 3rd: Twins 11, Red Sox 6 – Doubront allowed a two-out single to Morneau, but has settled down.

Top 2nd: Twins 11, Red Sox 5 – Pedro Florimon sent a 3-2 pitch by Webster into the Twins bullpen for a home run, tying the score. The Twins put runners at second and third on a Jamey Carroll walk and Joe Mauer double off the wall. After Webster retired Willingham with a pop out to Pedroia, Morneau’s long sacrifice fly scored the sixth Twins run. With two outs, Plouffe’s double went off the wall scoring the seventh run. Mercifully, that was the end of Webster’s night. he was replaced by Felix Doubront. This folks was just as ugly. Doubront, who was demoted to the bullpen in favor of Webster showed just why. He walked Doumit on four pitches. He allowed a single to Arcia. Aaron Hicks roughed him up for a two-run single and Florimon also knocked in a pair with a double.

Bottom 1st: Red Sox 5, Twins 4 – Wow. Action packed first inning. Jonny Gomes’ grand slam was the highlight, but leading up to it the Sox loaded them up on a bunt single by Shane Victorino, a single off the wall by Dustin Pedroia, a two-out walk to Mike Napoli and then Gomes struck with a bomb off Twins starter Pedro Hernandez. Jarrod Saltalamacchia continued it with a double to the left field corner and he rode home on Stephen Drew’s single to right. Drew was thrown out trying to stretch it to a double.

Top 1st: Twins 4, Red Sox 0 – Rough start for rookie phenom Allen Webster who allowed four runs. It started out so well by striking out Jamey Carroll and ended well with a K of Aaron Hicks. But the middle was difficult. He walked Joe Mauer and Josh Willingham, allowed a run-scoring ground-rule double to right to Justin Morneau. After Trevor Plouffe’s sacrifice fly scored the second run, Ryan Doumit blasted a two-run homer on a 1-2, 97 mph right down the middle of the plate. 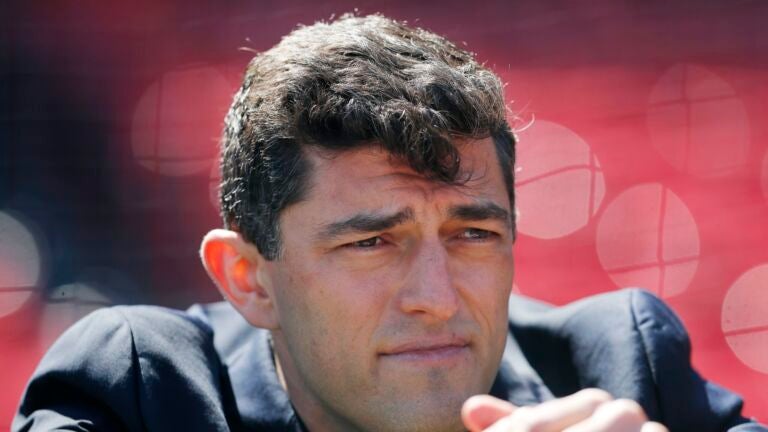