It’s a slice of life that seems like it just happened yesterday: the infamous Fenway pizza throw.

It’s been eight years to the day since the nation was captivated by a slice flying through the air at Fenway Park and landing on the shoulder of a beer cup carrying fan.

It all started with old friend J.D. Drew at the plate in a Patriots Day game against the Los Angeles Angels on April 16, 2007. Drew hits a foul pop into the stands between third base and the left field wall, and when Angels left fielder Garrett Anderson attempts to make the catch. While Anderson failed to come up with the ball, he did manage to run his glove into a couple of fans — Jason Sole from Brookline being one of them — and on the front line resulting in beer getting splashed all over them. In the midst of all the mayhem, in comes a lone flying slice of pizza hitting Sole square on the head and shoulder.

During subsequent replays of the incident, NESN analyst Jerry Remy calls out: “Here comes the pizza!”

As the story goes, Sole was hit with the slice by Danny Kelly in retaliation for some heckling that happened earlier in the game when Kelly and Matt Madore brought an entire pizza into the section. Both Kelly and Madore were tossed from the park after the toss.

Almost equally as famous was Jenny Dell’s 2013 interview with Kelly at Fenway where he basically apologized and seemed embarrassed by his actions six years earlier. 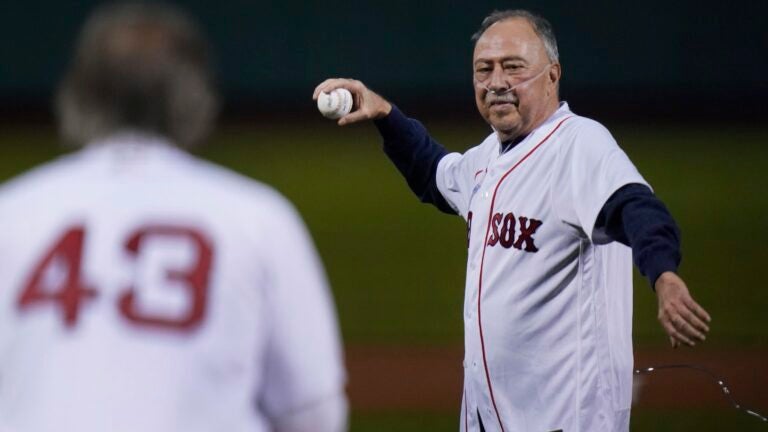 Jerry Remy, Red Sox icon on the field and in the broadcast booth, dies at 68