Those were the days, my friend, the days when Alex Rodriguez was treated like a human pinata at Fenway Park.

Let’s throw it back to June 1, 2007, when A-Rod — who returns to Fenway for the first time since September 15, 2013 — was greeted by a sea of blond-female-masked Red Sox fans in box seats along the third base line.

The savvy fan move was a message to the then-married Yankees star, who days earlier was taking heat in the New York tabloids over a rendezvous with a stripper during a recent visit to the Brass Rail strip club in Toronto.

Wakefield’s Jim Phipps — a lifelong Red Sox fan — purchased the masks for a birthday party, and had 33 left over that he handed out to people in his section before the game.

“I was watching ‘Good Morning America’ and they showed a picture from the [New York] Post of A-Rod and I said, ‘Hey, that girl looks like that mask – and bingo!,'” Phipps told the New York Post.

Hours earlier, it had been reported that Rodriguez tried to make up with this then-wife Cynthia by buying her a $6,000 necklace at the Ritz-Carlton hotel in Boston.

Take a look at the MasquerA-Rod party photos here.

In addition to the masked-fans inside the park, A-Rod was getting roasted outside the park before the game when former Boston radio station WBCN had staffers strutting down Yawkey Way with blond wigs holding up signs that read, “I’m with A-Rod” and showed the silhouette of a pole dancer.

Of course this was just one of many infamous A-Rod moments over the years. There’s The Fight with Jason Varitek in 2004, followed by slapping the ball out of Bronson Arroyo’s glove in Game 6 of the 2004 ALCS. Most recently, former Sox righthander Ryan Dempster was fined for plunking A-Rod with a fastball back in August 2013 at Fenway presumably in protest of Rodriguez appealing a 211-game suspension for performance-enhancing drug violations that ended up causing the Yankees slugger to miss the entire 2014 season.

A-Rod at the time called the Dempster plunking “unprofessional.” 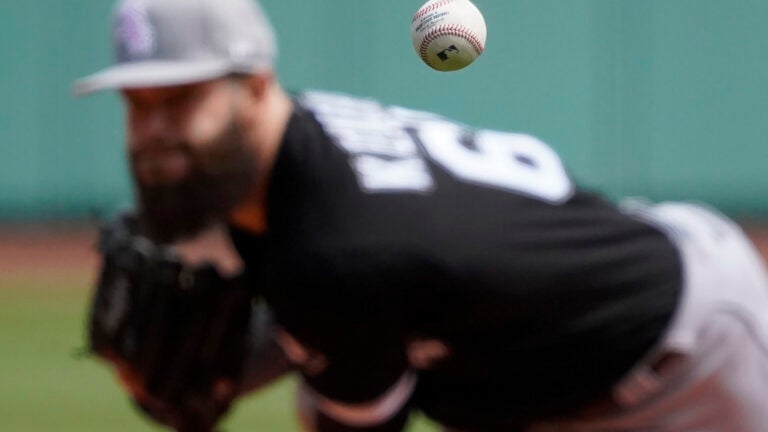