The wheels aren’t falling off the Brandon-Graham-to-the-Patriots bandwagon. Not by a longshot.

NFL Network draft guru Mike Mayock said a couple weeks ago that Graham “fits what (the Patriots) do from a rush linebacker perspective, but he doesn’t fit the prototype. It doesn’t mean they wouldn’t take him but he’s not as long as they like.”

Still, ESPN.com’s latest mock draft has both Todd McShay and Mel Kiper slotting Graham to the Patriots, and having seen the kid play quite a bit, I’m don’t think it’s a bad idea. But I’ll present another sawed-off rusher today — by way of my Sunday NFL Notes — to consider, if Graham either a) isn’t available at 22 or b) isn’t exactly what the Patriots want.

That would be Jerry Hughes, the TCU pass-rushing star who won Mountain West Defensive Player of the Year honors twice and registered 28.5 career sacks. He beat Graham in the 40-yard dash at the combine, and according to the official numbers, also was quicker than him at 10 and 20 yards. Graham didn’t participate in the jumps, but Hughes — who measured in a little taller than his counterpart, and had a larger wingspan — was among the best defensive ends in those areas too (34.5 vertical, 9-10 broad).

Bill Belichick would interested too to hear who Hughes’ idol is. That would be Lawrence Taylor, with the current-day guy he watches being DeMarcus Ware. Hughes said last week, “Taylor’s the greatest ever to play that outside linebacker/defensive end position. He did it better than anyone. … (Ware is) one of the greats also, the way he uses his athletic ability to get after quarterbacks. If my free time, I watch him.”

Now, guys like Jason Pierre-Paul (6-foot-4), Derrick Morgan and Everson Griffen (6-foot-3 both) are, from a build stanpoint, a little closer to Ware and Taylor, who exemplify the Parcells/Belichick prototype. But those three weren’t quite as productive as collegians as Hughes and Graham. And that’s why watching the draft play out, with this hole nearly certain to still be there, will be fascinating.

Will the Patriots adhere to the measureables? Or will they break the mold? We’ll see … 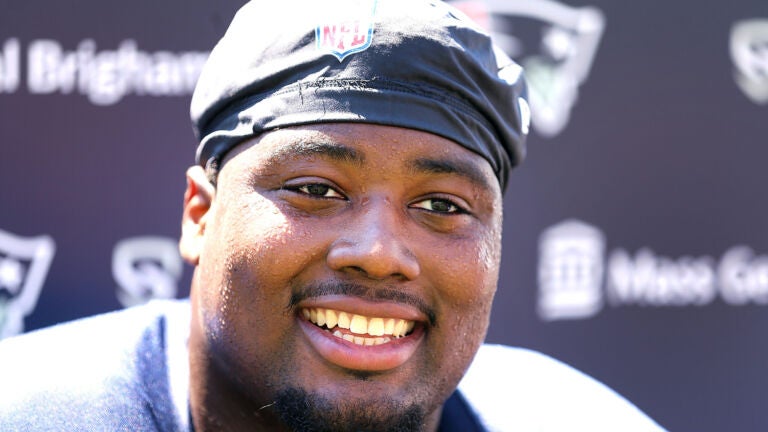