Good morning. Here is your PDB for Monday, Aug. 8, 2011. It contains all the links, info, analysis and occasional humor that you’ll need to go about your day. If you can’t detect sarcasm or take yourself and/or football too seriously, this may not be your thing.

– The Patriots continued to rework their defensive line with the additions of Jets DL Shaun Ellis and DE Andre Carter.

Like both signings. Ellis is a very good interior rusher who figures to make his biggest impact in subpackages in some sort of rotation with Vince Wilfork and Albert Haynesworth. Ellis killed the Patriots last season. He plays very hard, is very tough and is an outstanding person to have in the locker room.

Same goes for Carter, though we’re not exactly sure what his talent level is at this point. He was a bad fit in the Redskins’ 3-4 scheme at OLB, but is he still the guy who had double-digit sacks in 2007 and ’09? We’ll have to see. But at the least he gives the Patriots another guy up front who can beat the guy in front of him. The team had two of those last year: Wilfork and Mike Wright. The more the pass rushier, or something like that.

– The Patriots hosted safety Dashon Goldson yesterday on a visit, and ProFootballTalk.com reported this morning he is re-signing with the 49ers on a one-year deal.

The Patriots had a lot of interest in Goldson. Wonder if they wanted a two-year deal (anything more than one year for a potential starter in this market would have been a great coup for the team). Not many agents would allow their client to sign anything but a one-year deal when you’re young and talented, but still maturing as a player.

The fact remains that, according to sources with knowledge of the team’s discussions, the Patriots aren’t thrilled with what they have at the safety position, including Brandon Meriweather, who is in the final year of his contract and hasn’t had a very good camp so far. Where that leads, we don’t know. Maybe the team just wanted to give Meriweather a little tap on the shoulder to say, “Let’s get it going.”

– Monique Walker takes a look at the tight end group A.C. – After (Alge) Crumpler. Well, for now anyway. There’s still a chance he could land back here when his shoulder is healed up.

– A couple of good Patriots references in Peter King’s Monday Morning Quarterback. Including Randy Moss visiting a grieving Robert Kraft.
– In case you missed it, here’s the practice report from Saturday when the Patriots were last on the field. The offense is starting to do some things.

Here’s the tally so far:

– Jets aren’t thrilled that Shaun Ellis is now a Patriot.
– More Ellis reax.
– Plaxico Burress suited up, and Derrick Mason was spotted.
– Burress actually snuck onto the field.
– Mason said he chose the Jets because he thought they were his best chance to reach a Super Bowl.

– Bills rookies are swimming a little bit.
– CB Drayton Florence will miss the preseason opener with a sprained ankle.
– Former first-round pick Aaron Maybin may be battling just to stay on the roster. 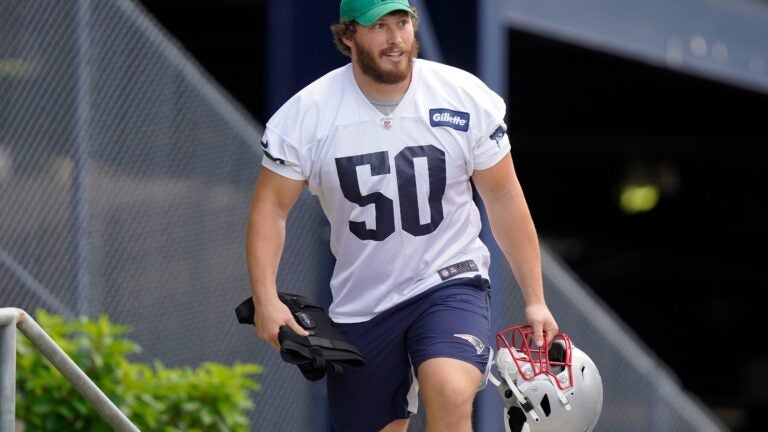