The New England Patriots open training camp on July 24. To get you ready, we will go through the roster position by position, highlighting the story lines, battles, and key players. We continue with the defensive tackle position.

Vince Wilfork and Tommy Kelly were the two starters at the beginning of last season and were lost to injury before the conclusion of the Patriots’ fifth game of the season. That allowed rookie backups like Chris Jones, Joe Vellano, and Sealver Siliga to earn significant playing time. The Patriots have also added rookie first-round pick Dominique Easley to the mix, building a competition between young defensive tackles battling for backup spots behind veteran starters.

Vince Wilfork: The 10-year veteran has never faced more questions entering a season than he will face in 2014. A surgically-repaired Achilles’ tendon will be asked to support Wilfork’s 325-pound frame. He showed signs of progress at the team’s organized team activities and mandatory minicamp, making the transition from the players practicing in the bubble to those practicing with the rest of the team. Wilfork’s ability to move all over the line will continue to be a huge asset to the Patriots’ defensive front.

Tommy Kelly: Kelly is recovering from a season-ending ACL injury that has kept him out of the team’s offseason workout program. The veteran has played all over the line in his career, in both a 3-4 and a 4-3 front. When healthy, he has the skill-set to control the gaps on either side of the man blocking him. He is considered a better run-stuffer than pass-rusher, but he has a nice set of pass-rush moves and uses his hands well to get into the backfield.

Armond Armstead: The Patriots signed Armstead away from the Toronto Argonauts in February 2013, but the young defensive tackle has yet to make his debut in a Patriots uniform. He missed all of the 2013 season with a mysterious infection, and was only present for the team’s first practice of OTAs before missing the rest of the offseason workout program.

Chris Jones: Ideally, the Patriots would have given Jones a year to develop in a situational role. Instead, he was the Patriots’ third-leading defensive lineman in snaps last season. He is not as big or stout as the ideal for a run-stuffing defensive tackle, leading to him being knocked off his feet at times, but he flashed some pass-rushing skills and finished the season with six sacks.

Joe Vellano: Like Jones, Vellano was thrust into the spotlight last season due to injuries. At 6-foot-2 and 300 pounds, Vellano is smaller than the Patriots usually prefer for the defensive tackle spot, but he did well in a difficult circumstance last year, and gets to take that experience and apply it to his new (originally intended) role as a backup in the rotation.

Sealver Siliga: It only took seven games, but Sealver Siliga was able to transition from an unknown midseason signing to a fixture in the Patriots’ defensive line rotation; he started the final six games of the season (four regular season, two playoffs) and played over 60 percent of the snaps in each of those games. His 6-foot-2, 325-pound frame is a near mirror image of Wilfork’s and he has a similar ability to anchor at the point of attack and bull-rush blockers into the backfield.

Marcus Forston: Forston enters his third year in the league, and thus his final year of practice squad eligibility, and will need to show that he has improved on the fundamentals that have held him off the roster in previous years. The 6-foot-3, 305-pounder has a great first step and low pad level to help him win leverage against blockers, but he doesn’t always stay low to the ground off the snap and can get washed out of plays as a result.

Dominique Easley: We’ve already mentioned the undersized Vellano, Jones and Forston, but in spending a first-round pick on Easley, the Patriots have ushered in a new era of defensive tackles. The 6-foot-2, 290-pound defensive tackle would not have been considered a fit in previous schemes, but his ability to disrupt the passing game through the middle of the line make him an asset the likes of which the Patriots have been missing for years. His burst off the snap is his most dangerous weapon, and he has a knack for slipping off blocks in order to get into the backfield.

With some question marks around the health and readiness of Tommy Kelly and Dominique Easley, the Patriots may be willing to carry more defensive tackles to start the season. Until we’ve seen Armond Armstead practice, it’s hard to project him for the final roster. Marcus Forston has been a practice squad fixture for the past two years. The arrival of Easley and the late-season emergence of Sealver Siliga are threats to Joe Vellano’s roster safety, but with the aforementioned questions about the health of the top of the depth chart, six defensive tackles could be in line for a spot. 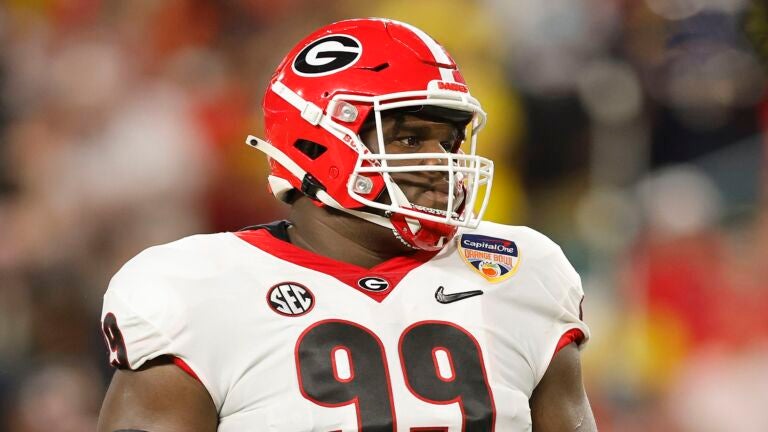