Rob Gronkowski’s “Sinners Bus” was not allowed in the VIP parking lot at Gillette Stadium Sunday because it was recently wrapped by “BodyArmor” — a sports drink that features the Patriots tight end as a spokesperson — and Pepsi has a deal with the NFL that gives the soft drink maker exclusive marketing rights around the stadium. But that didn’t stop the Gronkowski clan from getting to the stadium and stopping by their tailgate party before the AFC Championship game.

Gordy Sr., Gordie Jr., Chris, Glenn, and Dan Gronkowski all gathered in the parking lot before heading in to see Rob and the Patriots take on the Colts.

It was just a year ago that Rob Gronkowski was watching the AFC Championship game with his family as he was just coming off ACL and MCL surgery to repair torn ligaments in his right knee and his future was up in the air as a football player.

“Truthfully it was a terrible time for the whole family and everything else,” Gordy Gronkowski said about his son Rob. “He loves to play football, I mean his heart’s all there and everything else and that’s a game he loves to do. And to take someone’s career away, and you don’t know when something like that happens, you don’t know if he’s going to come back, how is he going to come back. Luckily, what’s happening this year is phenomenal and it’s exciting, it’s surreal and he’s having a great year but yeah, it was a very, very tough year.”

Rob’s brothers also had to help lift the Patriots tight end’s spirits after he underwent his sixth surgery since 2012.

“Being the caliber [of person] that Rob is, it’s tough for him,” Gordie Gronkowski said about his brother. “He always calls us up, we always chat. We’ve been through it before him so it’s nice to help give feedback, to let him know that he’ll be all right and just to be calm, and keep working hard, and go through the rehab process. He’s done that and he’s believed in it and we helped him get through it and it’s awesome where he is right now.”

The family is looking forward to making the trip to Phoenix and seeing a healthy Rob Gronkowski in the Super Bowl for the first time if the Patriots can get past the Colts today. 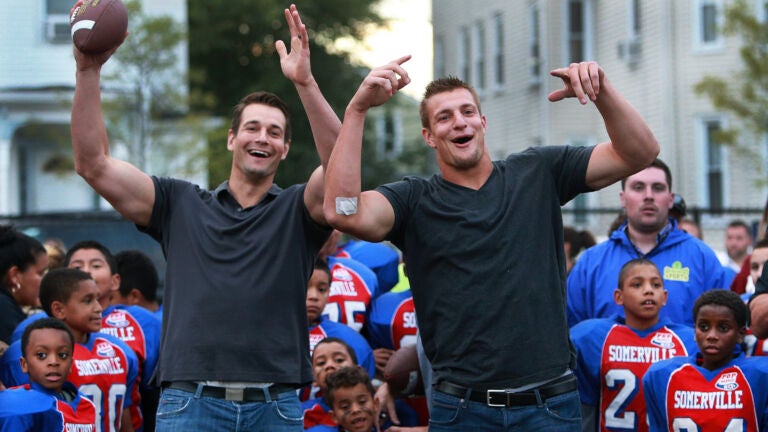