Willie McGinest in his last game as a Patriot in 2006. Jim Davis / Globe File

Former Patriots linebacker Willie McGinest is a finalist for the Patriots Hall of Fame for the first time this year. McGinest joins cornerback Raymond Clayborn (2014) and offensive tackle Leon Gray (2013) who are both second-time finalists.

Starting Thursday, fans can vote for the former Patriot most deserving of the team’s hall of fame enshrinement. Fans can vote on www.patriots.com until May 16.

This year’s inductee will become the 24th person to be enshrined into the Patriots Hall of Fame and will join defensive lineman Houston Antwine, who was selected by the senior selection committee, as one the 2015 honorees.

McGinest was the Patriots’ first-round draft pick in 1994 out of USC and was the first draft pick selected under the ownership of Robert Kraft. He played 12 of his 15 NFL seasons with the Patriots and was one of the cornerstones of the team’s success in winning the Super Bowl in the 2001, 2003, and 2004 seasons.

Clayborn was a three-time Pro Bowl player (1983, 1985, 1986) for the Patriots from 1977 through 1989. He joined the Patriots as a first-round pick (No. 16 overall) out of Texas in 1977 and quickly established himself as one of the best cornerbacks as well as a superb kickoff returner. He finished his career with a franchise-leading 36 interceptions, a record which was tied by Ty Law in 2004 and remains today, 24 years after Clayborn retired.

Gray was a third-round draft pick in 1973 by the Miami Dolphins as a tackle out of Jackson State. He was cut by the Dolphins before the start of the season and claimed off waivers by the Patriots. By the 1976 season, he was viewed as arguably the best left tackle in the NFL.

The Patriots will announce the 2015 Patriots Hall of Fame selection at a later date. 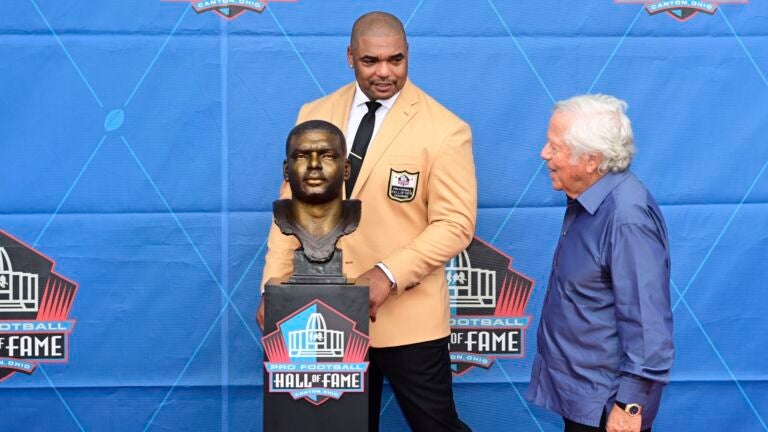