While Patriots fans across New England are digging in their heels in defense of Tom Brady and their favorite team, many NFL reporters, columnists and pundits farther from Foxborough took a different view of the NFL’s discipline in Deflategate.

Doyel doesn’t believe Brady was punished enough for the PSI infraction. Doyel writes under the headline, “Brady, Patriots got away with cheating.”

“Four games for Tom Brady, who at 38 in August could use a break,” Doyel wrote. “A million bucks for a franchise Forbes says is worth $1.4 billion. A first-rounder. A fourth. Those are flesh wounds. They’ll draw blood, like so many flesh wounds do, but they won’t devastate the Patriots.”

Kravitz, who first reported the Deflategate controversy from Indy, thinks the punishment was right in line with the offense.

“Goodell had to get this one right, and in the broadest sense, he did just that,” Kravitz writes for WTHR.com in Indianapolis. “Anything more would have been downright draconian, and would have sent the message that the deflation of footballs was more egregious than domestic violence or steroids. Anything less would have sent a signal to the rest of the league, and to the NFL’s multitude of fans, that Kraft, Goodell’s patron, and Brady, the face of the league, were untouchable.”

“I think [Brady] mishandled it with the league, and he also mishandled it in the court of public opinion,” Costas said on the Today show on Tuesday. “Think back, if he just said this: ‘Look, we all look for an edge. I like the football at the lowest possible end of what’s allowable. I communicated that to the equipment guys. If they went a bit overboard, I’m sorry, my bad,’ See you later.”

The MMQB’s Peter King writes that the four-game suspension for Brady “wasn’t surprising.”

“The NFL equated an apparent scheme (and I say apparent, because the Wells report did not produce proof of it) to slightly underinflate footballs to some of the worst discipline cases in league history,” King writes.

Florio writes that the Patriots failure to allow Jim McNally to be interviewed about his text around halftime of the Green Bay game made it easier for the NFL to hammer the Patriots.

“In hindsight, the Patriots should have encouraged McNally to do it,” Florio writes. “In hindsight, the Patriots also should have encouraged Tom Brady to surrender his text messages and emails for examination pursuant to the “extraordinary safeguards by the investigators to protect unrelated personal information.” It’s unclear whether cooperation on those points would have changed the outcome, but the outcome becomes easier for the NFL to defend by pointing to the separate violation arising from the failure to cooperate.”

“Brady should hit the mute button on Yee and pass on his right to appeal. He should instruct the players’ union to stand down,” O’Connor writes. “He should do the right thing here and admit that he knowingly broke the rules, that he was chin strap-deep in the illegal deflation of game balls, and that he deserves a four-game suspension that was always a fitting penalty for his cheating and refusal to cooperate with Ted Wells.”

Pats, Brady have no one to blame but themselves. If he had copped to this, the Placebo-level advantage gained would’ve been treated as such.

In Entrepreneur magazine, Brian Fielkow writes that there are Deflategate lessons to be learned for business leaders.

“Most importantly, how we, as leaders, manage our careers is a large part of our legacy,” Fielkow writes. In the end, our most important asset is our integrity. Is there anything that really makes it worthwhile for a leader to compromise his or her integrity?

“Whether we are a star athlete or just starting out in business, we must personally commit to a set of core values that we will never compromise. Tom Brady will retire from football as one of the all-time greatest quarterbacks, but there will now be a permanent asterisk by his name. The power to conduct our careers as leaders without an “asterisk” is in our control alone.”

“No one — not even our Golden Boy, our four-time Super Bowl champion, Tom Brady — is above the law,” Serby writes. “No one — especially the face of the league, a longtime role model to our youth, arguably the greatest QB of all time — has the right to tamper with the integrity and competitive balance of our great game.

“No one should have expected a mere slap on the wrist for Brady at the end of a four-month investigation that concluded he cheated — and he lied.

“You made the bed, Teflon Tom No More, more than more probably than not covered it up, failed to cooperate with Ted Wells, and left our NFL with no choice.”

The Post’s Mike Vaccaro writes that Robert Kraft, not Brady, is the biggest loser in the Deflategate fallout.

“Four months later, we now know that Kraft was either a) stunningly arrogant; b) utterly misled or c) entirely unconcerned with the subterfuge that has operated on his watch for years. None of those choices reflects well on Kraft, who has gone from model boss to boss enabler in 10 short years,” Vaccaro writes. “And whose own reputation now lies in tatters. Maybe forever.”

Lupica writes that NFL Commissioner Roger Goodell had no choice but to make an example of Brady.

“You cannot read the report and believe, truly, that Brady was innocent here, whether Wells described him being ‘generally aware’ of what happened or not,” Lupica writes. “You cannot believe this because Brady never acted innocent, or outraged. Mostly he was a smart guy trying to act dumb, about this dumb a crime.

“Goodell didn’t do this to him, the Colts didn’t do it, the people in the media who blew the whistle didn’t. Brady did this to himself. Even if Brady wins in arbitration, one of the biggest winners in the history of his sport has already lost big here.”

“Make him suffer a little bit more,” Johnson said, according to Bleacher Report. The reason Brady lied about deflating footballs, Johnson said, “is all about this, ‘I’m perfect. I’m never wrong…'” 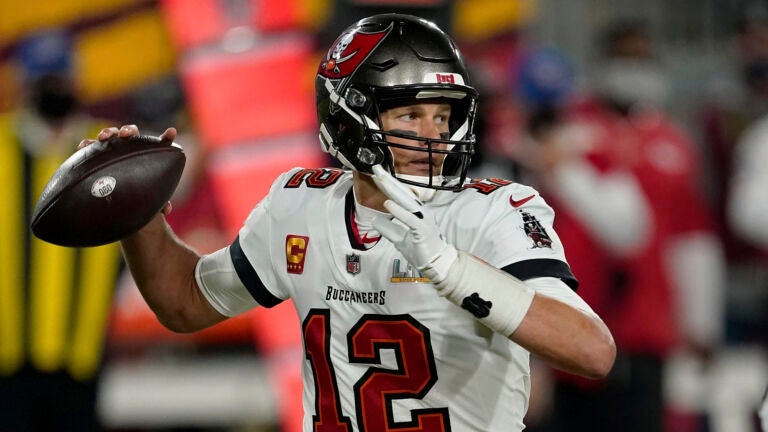