As he prepares for the second major tournament of the golf season, Tiger Woods is planning to squeeze in a visit to one of his golfing partners next week, heading to see President Donald Trump in the White House.

Woods, who is tentatively scheduled for a Monday visit, is not likely to play in the AT&T Byron Nelson next week in Dallas. That’s the last tournament before golf’s next major, the PGA Championship, begins May 16, and Woods apparently has chosen not to enter any tournaments since winning the Masters on April 14.

Woods, who lives not far from Trump’s Mar-a-Lago Club in Palm Beach, Florida, golfed with the president and Jack Nicklaus in early February, an event the president excitedly tweeted about. The two have teed off together several times, including at Christmastime in 2017 and at Thanksgiving last year.

Everyone is asking how Tiger played yesterday. The answer is Great! He was long, straight & putted fantastically well. He shot a 64. Tiger is back & will be winning Majors again! Not surprisingly, Jack also played really well. His putting is amazing! Jack & Tiger like each other.

As The Post’s Josh Dawsey noted in February, the White House is usually reluctant to confirm that Trump is golfing, but the Woods and Nicklaus grouping was special and reporters were allowed inside the president’s Jupiter, Florida, club. The president later shared a photo on social media and the Trump Organization notes on its website that Woods and Nicklaus, who endorsed Trump for president, have designed courses for the company.

Sharing a friendship with this president has been tricky for some athletes as New England Patriots quarterback Tom Brady discovered when a MAGA hat was found in his locker in September 2015. He pointed out that they have been longtime friends and golfing partners, but added that “it’s just a friendship.” And, when the Patriots visited the White House after winning the Super Bowl in 2017, Brady had other plans and stayed away. Woods, like Brady, emphasized that the friendship predates the 2016 presidential election.

That discretion earned praise from Trump, with the president tweeting: “The Fake News Media worked hard to get Tiger Woods to say something that he didn’t want to say. Tiger wouldn’t play the game – he is very smart. More importantly, he is playing great golf again!”

The Fake News Media worked hard to get Tiger Woods to say something that he didn’t want to say. Tiger wouldn’t play the game – he is very smart. More importantly, he is playing great golf again!

Last month, Trump was avidly watching as Woods won his fifth Masters and tweeted the next day that he would be presenting the golfer with the Presidential Medal of Freedom because of “his incredible Success & Comeback in Sports (Golf) and, more importantly, LIFE.” Woods would join fellow golfers Nicklaus, Arnold Palmer and Charles Sifford as Medal of Freedom recipients.

Since winning the Masters, Woods has been keeping a low profile. “I don’t mind telling you I’m really sore,” the 43-year-old golfer said immediately after the Masters. “I definitely won’t be touching a golf club [Monday].”

His recovery is especially important because there less time between the majors after the decision to move the PGA from August to May, between April’s Masters and June’s U.S. Open. The PGA will take place on the Bethpage Black course on Long Island and Woods will play in a threesome with Brooks Koepka and Francesco Molinari for the first two days, keeping with the tradition of teaming the winners of the last three majors. Woods and Molinari were paired in the final group at the Masters and played together at last year’s British Open, which Molinari won by two strokes.

As Trump noted, Woods overcame a lot to get to this point, recovering from personal issues and four back and knee surgeries to win his 15th major and 81st overall PGA Tour victory. It was a comeback that delighted the president, who had predicted that Woods would be winning majors again.

“Everyone is asking how Tiger played yesterday,” Trump tweeted after the round in early February. “The answer is Great! He was long, straight & putted fantastically well. He shot a 64. Tiger is back & will be winning Majors again! Not surprisingly, Jack also played really well. His putting is amazing! Jack & Tiger like each other.”

Trump’s love of the sport is well-known, but it’s also a business that has gotten him unwanted headlines. Earlier this week, The Post reported that undocumented workers at Trump National Golf Club Westchester in New York said they were sometimes told to work extra hours without pay. In January, The Post reported that undocumented workers at the club were fired as the fight over the president’s desire for a border wall heated up and led to a government shutdown. 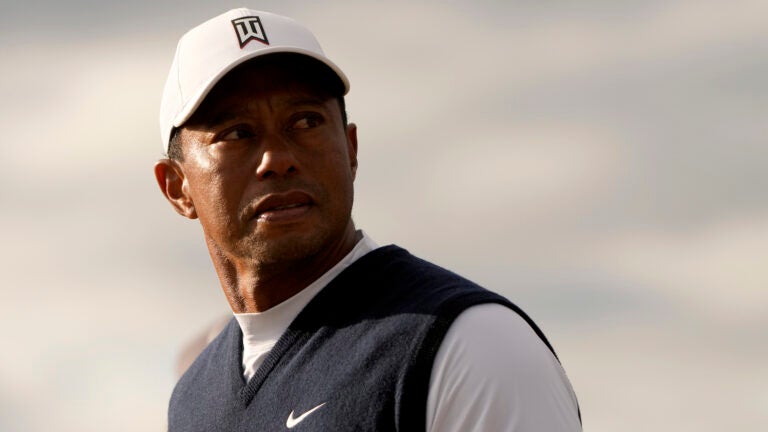