Phil Mickelson may trail Tiger Woods by a significant margin in major titles and PGA victories, but he didn’t let that stop him from talking a little trash about his greatest golf rival.

Heading into Sunday’s “The Match: Champions for Charity,” he aimed for Woods, who will team with Peyton Manning while Mickelson is joined by Tom Brady. The match is at Woods’ home turf, Medalist Golf Club, in Hobe Sound, Florida.

“I can’t wait to go to Tiger’s place and take him down,” Mickelson told Golfweek. “Tiger thinks he has a huge advantage playing there because he was insistent that this event is played on his home course despite everyone else wanting to play it elsewhere. That’s fine. We’ll take it to him and Peyton.”

“It’s his home course but Tom and I are going to go down there and put it to them, and we’ll make it that every time Tiger shows up at his home course, he’ll have a bad memory,” he said.

The event is what passes for excitement in golf during the novel coronavirus pandemic. Until pro golf returns, without fans, next month in Fort Worth, the TV event will have to suffice. It will air on TNT, TBS, truTV and HLN and is expected to raise at least $10 million for relief efforts.

The pressure might be on the future football Hall of Famers. Manning plays to a 6.4 handicap index, Brady is at 8.1. (In Super Bowl rings, Brady leads 6-2.) The format calls for nine holes of four-ball (best-ball) play and then nine of modified alternate shots. Mickelson acknowledged that there would be “mishaps” and “bad shots” that would require them to “laugh at ourselves,” something that none of them is really known for. Each player will wear a microphone and will ride in his own cart. There will be no caddies or fans on the course and there’s no word on whether there will be some kind of delay, with Woods and Brady known for colorfully expressing their frustrations.

“I’ve played with Tom a few times. I’ve played with him at Augusta National and Friar’s Head and I’ve seen him hit some remarkable shots and I’ve seen him hit some shots that you wouldn’t be so surprised he hit,” Mickelson said. “But his strength is he is a very good putter and he hits the ball a long ways and he’s good with his short irons. If I can get the ball in play, I think we’ll have a chance on the back-nine modified, alternate-shot platform.”

Earlier this month, Manning and Brady kicked off the trash talk, in a good-natured way.

Manning again showed his talent for comedy while jabbing at Brady for an incident in which the new Buccaneers quarterback wandered into the wrong home in Tampa. Brady himself joked shortly afterward that he had been guilty of “breaking and entering,” and Manning referred to the site of “The Match” in claiming that “the tournament had to be in Florida after Tom’s B-and-E arrest.”

“With the ankle monitor, [Brady] couldn’t leave the state,” quipped Manning, whose 18-year NFL career ended in 2016. “Tiger and I talked to the sheriff in Tampa, he’s gonna be allowed to go to Palm Beach to play.”

Brady’s rebuttal was a bit more barbed. He fired back with a reference to NFL rule changes on downfield contact after the Indianapolis Colts, Manning’s team at the time, complained bitterly about how the New England Patriots played his wide receivers in the 2004 AFC championship game.

“Hopefully, after Phil and I win,” Brady said, “they don’t try to change the rules on us or send the tapes into the NFL – I don’t know if Peyton can still do that now that he’s retired – and try to change some of the rules to make it a little easier the next time.”

Woods said last month that the foursome had been woofing from the get-go, but Mickelson told Golfweek that he and Woods had held back in their 2018 match.

“Tiger and I clamped up the first time,” he said. “That won’t happen again. I think having Peyton there will be a big part of it because he gives me and Tom somebody to rough up. Peyton, when he comes back at you, he does it in a funny way that elicits a laughter from you as opposed to a defensive response.” 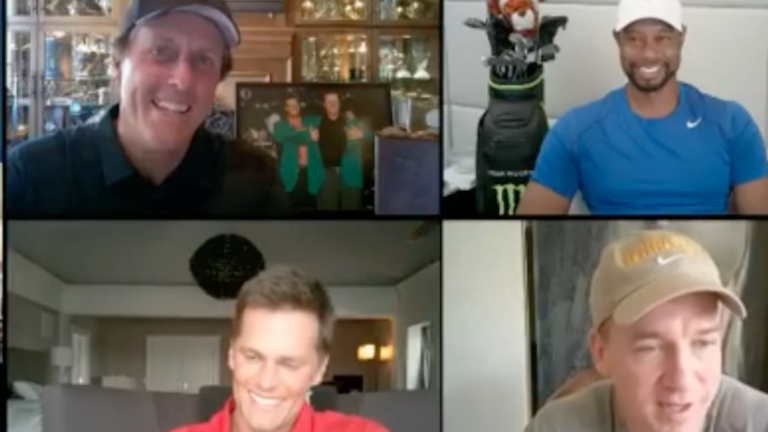 Here are the details on the charity golf event between Tiger Woods, Peyton Manning, Phil Mickelson and Tom Brady