LOS ANGELES (AP) — Tiger Woods was moved Thursday to another Los Angeles hospital after undergoing surgery on his right leg that was badly injured in a car crash.

The hospital didn’t provide any other details, saying it was respecting patient confidentiality.

“On behalf of our staff, it was an honor to provide orthopedic trauma care to one of our generation’s greatest athletes,” Dr. Anish Mahajan, Harbor-UCLA’s chief medical officer, said in a statement.

Woods was hurt Tuesday when a 2021 Genesis SUV he was driving on a downhill stretch of road struck a raised median in a coastal Los Angeles suburb, crossed into oncoming lanes and flipped several times.

Mahajan earlier said Woods shattered the tibia and fibula bones of his lower right leg in multiple locations. Those injuries were stabilized with a rod in the tibia. Additional injuries to the bones in the foot and ankle required screws and pins, Mahajan said in the statement released on Woods’ Twitter account late Tuesday night.

Woods was wearing a seatbelt and there wasn’t any evidence that he was impaired by drugs or alcohol, Los Angeles County Sheriff Alex Villanueva said after the crash.

However, the crash investigation continues.

Harbor-UCLA Medical Center is a Level 1 trauma center, meaning it is qualified to provide the most comprehensive surgical and other care for such injuries. Cedars-Sinai has a renowned Sports Medicine Institute that has catered to professional athletes and a rehabilitation program for sports-related and orthopedic injuries.

The wreck happened on the border between the communities of Rolling Hills Estates and Rancho Palos Verdes. The county supervisor who represents the area has requested a safety review of the roadway, where cars are known to gain speed because of the steep grade and authorities have said wrecks are common.

In 2017, Woods was arrested on a DUI charge when Florida police found him asleep behind the wheel of his car parked awkwardly on the side of the road, with its engine still running, two flat tires and a blinker flashing.

Woods said he had an unexpected reaction to pain medication. He eventually pleaded guilty to a reduced charge of reckless driving. Three weeks after the arrest, he entered a clinic for help dealing with prescription medication and a sleep disorder.

The crash this week was the latest setback for Woods, who has won 15 major championships and a record-tying 82 victories on the PGA Tour. He is among the world’s most recognizable sports figures, and at 45, even with a reduced schedule from nine previous surgeries, remains golf’s biggest draw.

He was in Los Angeles over the weekend as the tournament host of the Genesis Invitational at Riviera Country Club. Monday and Tuesday had been set aside for him to give golf tips to celebrities on Discovery-owned GOLFTV. 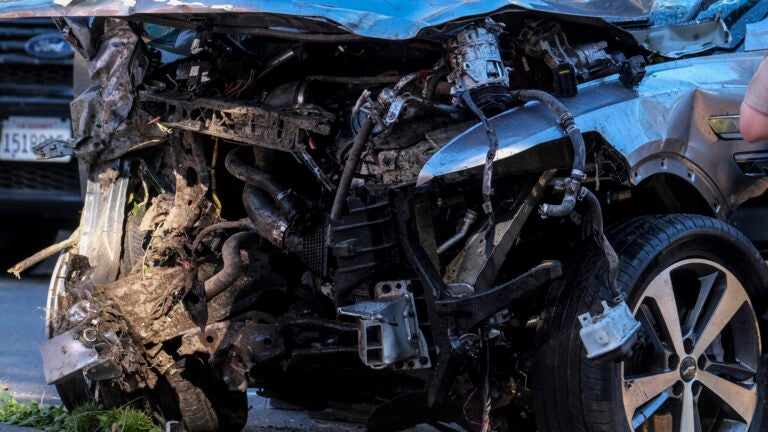