When Shy Odom decided to transfer to Los Angeles prep school Sierra Canyon for his sophomore season from Chestnut Hill’s Beaver Country Day, he had one goal in mind.

“I’m trying to grow into a beast, unstoppable”, Odom said during a preseason matchup against Hillcrest Prep in October.

The 6-foot-6 small forward had options to remain on the East Coast and suit up for an elite prep school. In New England, Brewster Academy boasts top-level prospects such as Kentucky-bound Terrence Clarke, and Odom even considered Thayer Academy, where his uncle works. It was Sierra Canyon, and its talented roster, that caught his eye.

“Up in Boston, I felt like I wasn’t getting better,” Odom admitted. “But coming here, playing against 5-stars every day in practice, that’s what was going to help me get better.”

Joining the team meant playing alongside Kentucky-bound Brandon Boston Jr. and highly-ranked Ziaire Williams. The school has produced NBA players such as Marvin Bagley III, and its current team boasts the sons of NBA greats – LeBron “Bronny” James Jr., son of Lakers forward LeBron James, and Zaire Wade, son of Dwyane Wade. Odom knew he would be playing with the best at a school that would get him noticed, where games are televised live on ESPN, and both James and Wade make appearances to watch the team compete.

LeBron James and Dwayne Wade sit court side during a Sierra Canyon game against Hillcrest Prep in October.

“You can’t let it get to your head or else you are going to fall behind,” said Odom of the attention surrounding Sierra Canyon. “I would say I didn’t have that at Beaver Country Day to this level. Not to the point where I walk around and everybody knows who my school is, who my team is, knows who I am.”

Even on a team as talented as Sierra Canyon, Odom is finding his place. He is currently averaging 8.5 points and 6.5 rebounds per game, shooting 51.5 percent from the field. On the court, Odom competes with a toughness and flare, delivering high-flying dunks and muscling his way into the paint for easy layups and to snag boards — a critical component of their dazzling offense. Case in point: at the Hoophall Classic in Springfield, Odom scored on back-to-back offensive possessions early on in the game, first on a pass from Bronny, the other a lob from Boston. He finished with 16 points, 10 rebounds, and was named Player of the Game.

“He gives us a player that we don’t have,” Sierra Canyon head coach Andre Chevalier told MassLive. “Somebody with size that can defend big guys, that can defend guards, he handles and shoots it well..It’s exciting for us because he allows us to play big or play small.”

For Odom, playing at Blake Physical Arena at Springfield College with his entire family sitting on the right side of the stands was a homecoming moment. His family wore custom made T-shirts with his face printed on them, along with his own Showtime-themed moniker, “ShyTime.” They waved signs with his face on them, and watched as he caught the lob from Boston and delivered a monster dunk to an arena filled with screaming fans.

“It feels amazing, emotional nerve wracking, all the feelings at once,” Odom said about being back home and playing in front of his home crowd. “Some of my games haven’t been great throughout the season. So to come to my home city and play in front of all my peoples, I just want to be able to impress them and put on a show for them.” 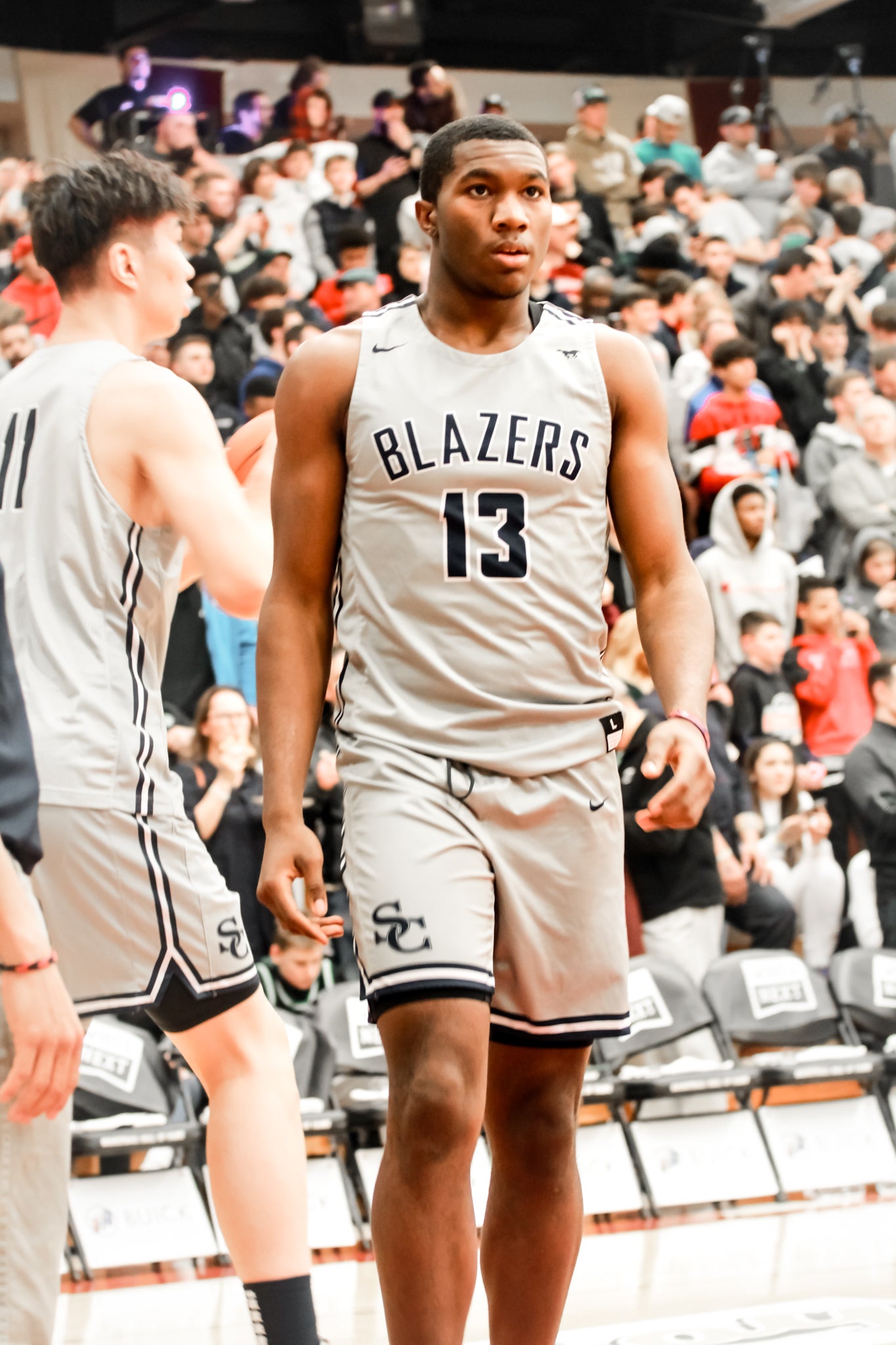 Shy Odom during a game against Dominican High School on Saturday.

Even with his early success, the move to California has not been the easiest transition for Odom. After the game, he admitted that he’d recently been dealing with homesickness and missing his family and close friends. He’s had to change time zones, experience a drastic climate shift, and adjust to a new school and team.

“There’s been ups and downs,” Odom said. “Going through things with school and travel, all that stuff…It’s just been really hard, being away from family. It’s takes a lot of mental toughness.

“I miss all my family. I miss a lot of my friends in Massachusetts, some guys I call brothers. All the attention out there [in California] is great, but it’s just not the same when I had it back home.”

He’s found some sense of home in his teammates.

“The team is my family away from my family,” he said. “Whenever I need something or need to talk to someone, any one of those guys I can call and they’ll pick up. If I ever need anything, they’ll help me and have my back.” 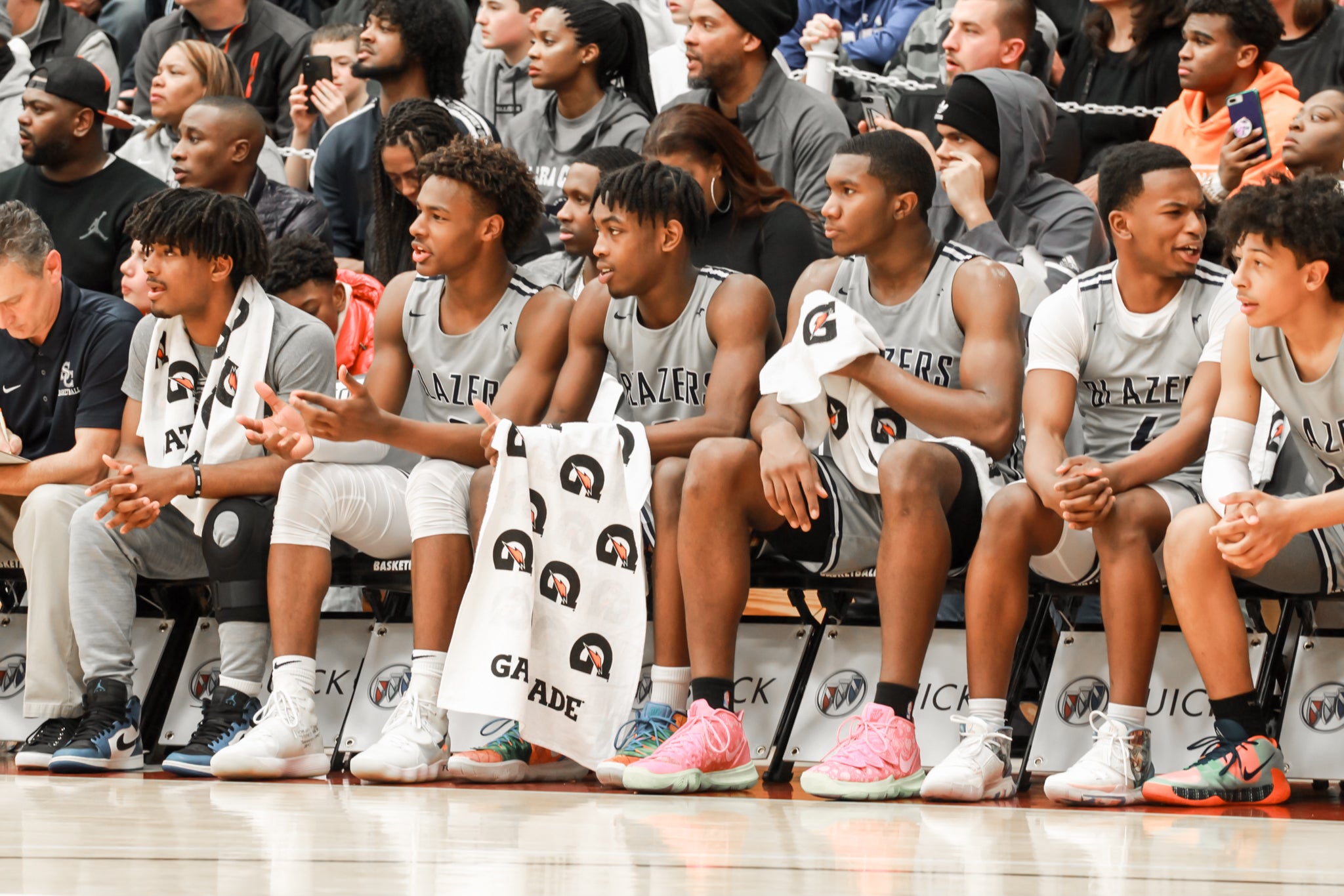 Shy Odom on the bench sitting beside teammates Zaire Wade and Bronny James.

He would, however, get the chance to reconnect with his immediate family after the game. As they waited excitedly for Odom to come out of the locker room to reconnect with them, they sang Sly & The Family Stone’s “Family Affair” gleefully.

“I love them all,” Odom said. “Having all the support that pushes me to be the kid I am today.”

His mother’s boyfriend, Pierre Bennett, who serves as a step-father figure, is not surprised Odom is excelling athletically. While he is currently unranked for the class of 2022, Odom is making a case to be on recruiting radars.

“He’s surrounded by some of the other superstars, too, so for him to be surrounded by these caliber of players, which is what he needs, it allows him to run his game out,” Bennett said. “For him to come back home, it’s like, ‘OK, this is what I’ve been away for,’ and for everybody to see him display his game, his maturity and his growth.

“There’s nothing that he’s doing that we don’t expect him to actually do. It’s not that it’s a surprise to us, we’re just happy to see it because we have not seen it in a long time. For him to come here and show everybody, even on national television, that’s what I’m proud of.”

Even with the spotlight and attention on him now, the sophomore remains appreciative of the opportunity he has to suit up for Sierra Canyon.

“It’s hit me at once, it was like a hard hit,” he said about the spotlight. “But now I’m getting the flow of everything…It’s shocking to see cameras in your face everywhere you go, it can get annoying at times but I appreciate it and soak it in while I have it.

“I count my blessings [and] think about everyone who wants to be in the position that I’m in. I don’t take it for granted.”

A lawsuit against a retired professor is ruffling the well-to-do from Georgetown to Newport, R.I.