Exactly 100 years ago, Boston Red Sox fans woke up to the news of arguably the most ill-fated trade in team history.

And no, we’re not talking about Jeff Bagwell.

Red Sox owner Harry Frazee agreed to the deal to sell Babe Ruth to the New York Yankees for $100,000 on Dec. 26, 1919. But the two teams didn’t announce the sale until Jan. 5, resulting in front-page headlines the following day — at least, in The Boston Globe (in The New York Times, the sale was covered on page 16). 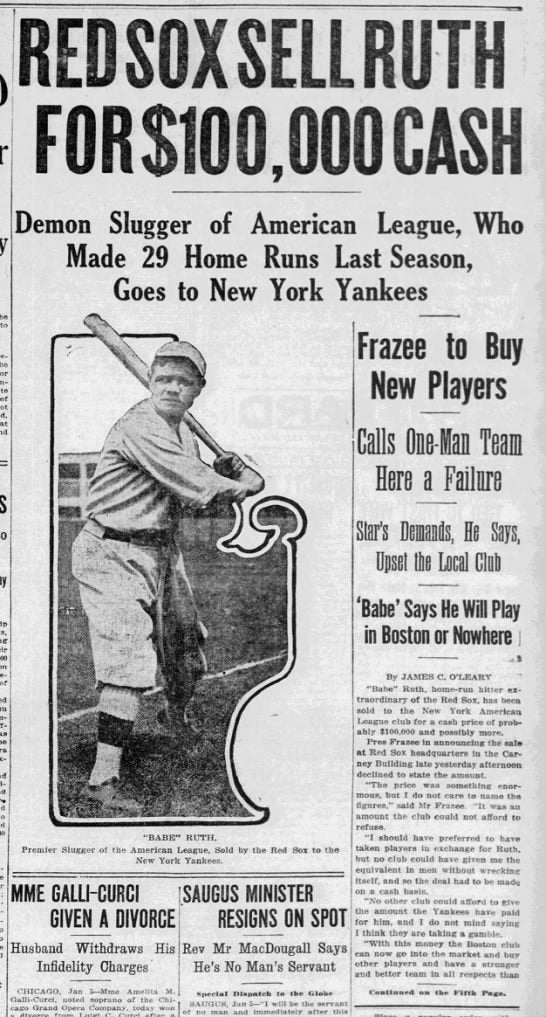 Ruth had led the Red Sox to three World Series in the previous decade as a formidable pitcher and hitter, who was just rounding into what would become historic form. But Frazee defended the sale — a then-record sum that he hoped would relieve his complicated money struggles — as “an amount the club could not afford to refuse.” The Red Sox owner also argued that he would use the money to build a more balanced roster, following the team’s disappointing 1919 season.

“What the Boston fans want, I take it, and what I want because they want it, is a winning team, rather than a one-man team which finishes in sixth place,” Frazee said, according to the Globe.

That didn’t quite happen. Instead, the Red Sox came in fifth the next two seasons — and then finished in last place eight times from 1922 to 1930. And while Ruth went on to set home run records and win four World Series with the Yankees, the Red Sox didn’t win a championship until 2004 (ironically, after another more recent run of success, the Red Sox seem poised to commemorate the centennial of the Ruth sale with another highly controversial trade).

Frazee was right about one thing: Red Sox fans wanted a winning team. But at the time, the jury was still very much out on whether selling Ruth was the right decision.

“I agree with Frazee,” Fred Tenney, a Georgetown native and former MLB player, told the Globe. “He knows his business best. A team is as strong as its weakest link. A player that fits his team is of more value than any star not working in harmony with his club.”

Some fans echoed that sentiment, praising Frazee for what they thought was putting the interest of the team above that of an individual player (Ruth had held out during the previous offseason in pursuit of a better contract, before going on to hit a then-record 29 home runs in 1919 for the Sox).

“I admire [Frazee’s] willingness to incur the emnity of the fans, at least temporarily, in his efforts to produce a happy, winning team,” Cambridge resident Orville Dennison said at the time.

Others were more prescient. Edward E. Babb, president of the Boston Athletic Association, told the Globe that it was a “big mistake.” South Boston resident Francis Hurney predicted that Ruth’s upswing would only continue.

“He beat the world’s record for home runs last year,” Hurney said. “This year would probably find him beating his own record.” (It did — as did the following year.)

Even in the early 20th century, some fans said the cash grab was another indicator of the decline of America’s pastime. Hurney declared that “true sportsmanship” had been “banished” from the game and had been replaced by “financial interests.”

“If the Boston club got the money it is reported to have for Ruth, it might be considered a good deal,” Jerry Gallivan told the Globe at the time. “But from what I am able to see, there no longer is any sentiment to baseball.”