The Bishop Feehan boys’ hockey team returned to the sanctity of an ice rink Friday night, three days after their beloved teammate, A.J. Quetta, suffered a serious spinal-cord injury in a game against Pope Francis in West Springfield.

Amidst ongoing concerns during the pandemic, attendance was limited to parents of Shamrock players and those from visiting Austin Prep in the Catholic Central matchup at the New England Sports Village in Attleboro.

“It was good for the kids to get them back out,” said Bishop Feehan coach Kevin Dunn. “We were a little concerned that they might be a little bit in shellshock still, but the kids actually handled it very well. I was glad to see they were basically high school kids being high school kids.”

As of Thursday, Quetta, a senior from North Providence, R.I., remained in critical condition at Massachusetts General Hospital in Boston following surgery Wednesday evening. Initially, he was taken to Baystate Medical Center in Springfield Tuesday evening after his head absorbed the impact of hitting the boards in the first half of the Pope Francis game.

On the Shamrocks’ home ice Friday, the teams held a brief pregame ceremony, with a portrait of Quetta situated along the rink-side glass flanked by his No. 10 Shamrocks jersey and a replica No. 10 Boston Bruins jersey with Quetta’s name.

“We spoke [to our players] yesterday, went over the injury and what was going on,” Austin Prep coach Bill Pappas said prior to the game. “I think it’s good [Bishop Feehan is] getting back on the ice and doing it for [A.J.]. If we can be a part of it, we’re here and when the puck drops, it is a game and we’ll compete, as we did when we played them two weeks ago.”

“It brought back the memories,” Brown said in a phone conversation Friday afternoon. “Every injury is different, I don’t know exactly what’s going on in their mind, but I’m sure it’s pretty similar.”

Brown, who worried that Quetta may be having thoughts of “why me?” just as he did after his own accident, said that the support from the hockey community has him thrilled.

Through late Friday evening, a GoFundMe organized by Quetta’s sister, Elyse, had reached $618,230 in donations — from an original goal of $10,000.

Quetta’s injury is seemingly on the mind of everyone in the athletic community in Massachusetts, from the preps to the pros.

Prior to the beginning of Friday’s virtual MIAA Board of Directors meeting, president Jeffrey Granatino offered his thoughts and prayers.

The Bruins honored Quetta both before and after Thursday’s game at TD Garden against the Pittsburgh Penguins, too. Brad Marchand hung Quetta’s jersey behind the Bruins’ bench prior to puck drop, and the team dedicated their 4-1 win to Quetta — who had a ceremonial name plate installed in Boston’s locker room. Newly-signed forward Craig Smith awarded the game puck to Quetta’s stall.

“We’re all praying for A.J.,” Walpole native Chris Wagner, who played three years of MIAA hockey at Xaverian, said postgame. “Way bigger than hockey … our team is really thinking of him, his family, anyone affected.”

Dunn lauded Quetta for his vast improvement from freshman year to senior season. “He’s made that really good step forward,” said the coach. “He’s a very competitive kid, always wants to be on the ice, works hard. He works hard in the classroom, too; he’s an honor student. He seems to be a pretty well-rounded kid.”

Recalling his former Norwood teammates, Brown said the Shamrocks should “go out there and have him in your heart, have him on your mind and go out there and play the game that he wants you to play. Play hard, play every shift like it’s your last. You never know what might happen.”

In Austin Prep’s 5-2 win, Nick Nardone, Doug Russo, Brady McGrath, and Jacob Duval scored for the Cougars (6-1-3) before Roger Scanlan got Feehan on the board at 6:52 of the second. Duval tacked on another for the Cougars in the third, while Aidan Scanlan got one back for the Shamrocks at 10:10.

“It was somber,” Pappas said. “Once the puck drops, you have to get out of that mode and there’s a game to be played. We said our prayers and hopefully the best will come out of this.” 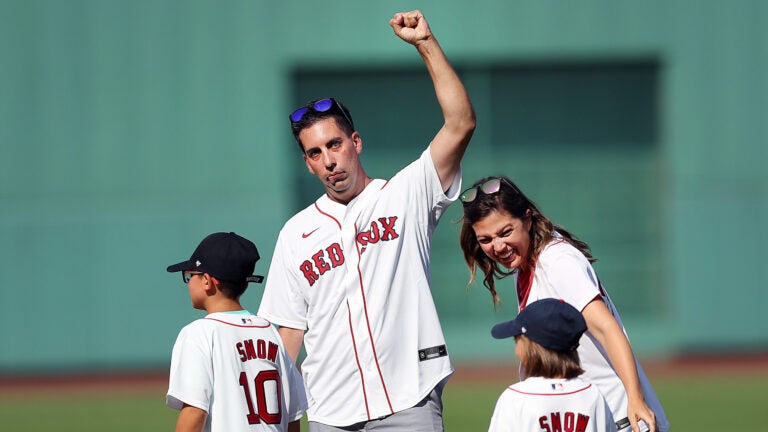