Jeff Isbell gets it.

The general manager of North Andover Country Club would love to be out on the course, interacting with his members and his employees as they come out of hiding for the start of another golf season.

But Isbell, like everyone else, is at home with family, including his two kids under the age of three, one of whom might wake up from a nap while he takes this phone call. This is golf, and life, under Gov. Charlie Baker’s stay-at-home order while the coronavirus pandemic continues to spread.

Despite efforts from the Alliance of Massachusetts Golf Organizations, which includes Isbell, the president of the New England Golf Course Owners Association, golf courses were not deemed essential and forced to close.

“People want to get out of the house,” Isbell said. “We want to get out. I want my members who are paying dues an opportunity to use the club. But the facts are in. We’ve been told we can’t [open], and we’re going to honor the governor’s opinion.”

Massachusetts is one of 14 states that is not allowing play, according to Golf Digest. But across the border, courses in Rhode Island and Connecticut are still open.

Three Massachusetts residents were arrested after playing a round of golf at Meadowbrook Golf Course in Richmond, R.I. Signage in the parking lot stated the course was only open to state residents.

Last week, Springfield Mayor Domenic J. Sarno angrily responded to a report that an estimated 60 golfers were playing on closed courses in the city.

“What is wrong with you people?” Sarno said. “I will blockade those courses. This is a serious time right now. Talk about being selfish. Get it through your thick head. Don’t do it.”

And so Baker’s orders are ones that the Alliance of Massachusetts Golf Organizations will diligently follow, even while continuing trying to get the order changed.

On March 20, the group sent a letter to Baker and Lieutenant Gov. Karyn Polito, asking that the golf course business be considered essential, while barring clubhouse, golf shop, and restaurant operation.

“We believe the field of play, which typically represents over 200 acres of open space land, should be treated differently from the service areas of a golf course operation,” read the letter. “The opportunity for socially distant recreation on a golf course is much like taking a walk through one of our wonderful state parks.”

But Baker’s order on March 23 came down hard, and courses, which in many cases had just opened, were forced to close. After a second letter dated March 24 asked for golf course maintenance to be deemed essential, that request was granted.

Landscaping work is ongoing, so the season may begin as soon as it is safe. The Alliance of Massachusetts Golf Organizations is working to determine next steps in their continued effort to inch that start date closer.

“This is the time of year when we’re able to get the attention of golfers,” said Jesse Menachem, executive director of Mass Golf. “You’ve got that missed opportunity right now. The weather is turning, major championships [are] being postponed.

“We are being very cautious and aware of the circumstances to the overall industry. We’re relying on a short season of only eight months, and the sooner we can play in a healthy and safe environment, the better.”

The spring season is crucial on Cape Cod, where it’s a race against the clock for year-round residents who grew up learning the sport on local courses that can become overrun in the summer months.

“While [the golf courses] make quite a bit of money off of the summer visitors, it’s the townspeople that use it,” said David Stott, president of the Golf Course Superintendents Association of Cape Cod. “They are the members that we’d like to certainly see [have] the opportunity to play.”

At Chequessett Yacht and Country Club in Wellfleet, where Stott is the superintendent, there were safety measures implemented to start the season, about a week before the course was forced to close. Sand trap rakes and ball washers were removed from play, and cart use was prohibited. Stott was in communication with colleagues around the country to determine how his course could open safely.

“If people change their habits a little bit, it can be done,” Stott said. “We would like to have [courses] open, because it could be a nice outlet for people looking to get outdoors if its managed correctly.”

The measures are ones that would continue, and perhaps expand, under a changed ruling.

“When we do get the green light, as part of any follow up to a request that golf become essential, we would take the next steps to promote that we want to be cautious, careful, and respectful of what’s being asked,” Menachem said.

Even as the Alliance of Massachusetts Golf Organizations continues its behind the scenes work, the messaging to the public remains the same.

“Respect the current stance of the governor and his administration, and the decision they’ve made to try to contain COVID-19,” Menachem said. “They’re trusting the resources they have in the health field, and the experts there. When they feel there’s an opportunity to ease up on certain practices and potential business, that’s what we’re in a position to suggest and promote right now.” 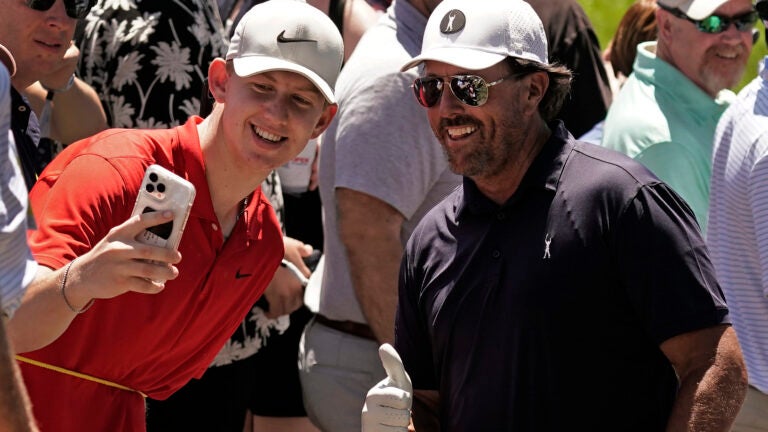