Earlier this week, Boston.com reported that the Duxbury High School football team used anti-Semitic language in its play-calling during the first game of the season against Plymouth North on March 12.

On Tuesday, Duxbury superintendent John Antonucci told the Boston Globe that “it has become clear that members of the Duxbury High School football team did in fact use anti-Semitic and potentially other inappropriate and derogatory language.”

Here’s what we know about the investigation into the program.

How has the coach responded?

“The use of this language was careless, unnecessary and most importantly hurtful on its face — inexcusable,” Maimaron said. “The staff and the team have been transparent and cooperative with administration during this time, and we have taken responsibility for the incident. We are dealing with this as a team and focusing on the lessons we can learn from this.”

Maimaron was not on the sidelines for the team’s most recent contest on Friday.

How long was the play-call system in place?

According to Anti-Defamation League executive director Robert Trestan, there are “indications” that the play-call system has been in place for “for quite some time.” A former student told the Globe the terms had been used in practice for years but not in games.

How long has Maimaron been at Duxbury?

Maimaron has been at the helm of Duxbury’s program since 2005. During that time, the Dragons compiled a record of 159-43 and won five Super Bowl titles.

How has Duxbury’s administration responded?

On Monday, the school’s superintendent, assistant superintendent, and principal issued a statement to the community, saying they launched an ongoing investigation. The football program “immediately” halted its play-call system.

The statement added that while players exhibited poor judgment, “the responsibility for this incident also lies with the adults overseeing the program. In short, this was a systemic failure.”

The school is mandating sensitivity and diversity training for the team.

Duxbury athletic director Thom Holdgate told the Globe he contacted both the ADL and Northeastern’s Center for the Study of Sport in Society for support services for students and staff.

How has the town reacted?

Speaking to the Globe, the Rev. Catherine Cullen — president of Duxbury Interfaith Council and pastor of the town’s First Parish Church — said the town is “absolutely outraged and appalled.” Cullen heads a group called “Duxbury For All — Promoting Diversity, Equity, and Inclusion,” which sent a letter to Duxbury’s selectmen condemning the language used by the team. Duxbury town manager Rene Read told the Globe the group has been invited to speak at the next town meeting on Monday.

The Globe’s Dan Shaugnessy called for Maimaron’s firing in a column on Tuesday.

“You are a leader of impressionable young people,” Shaugnessy wrote. “You knew this was going on and did nothing to stop it. You apologized only when players from the other side complained and it was brought to the attention of your bosses. This is more than embarrassing. It disqualifies you from staying on that job.”

Maimaron is not certain if he will coach Friday’s game between Duxbury and Hingham, per the Globe.

The ADL has called for a “full-scale” independent investigation into the language used. 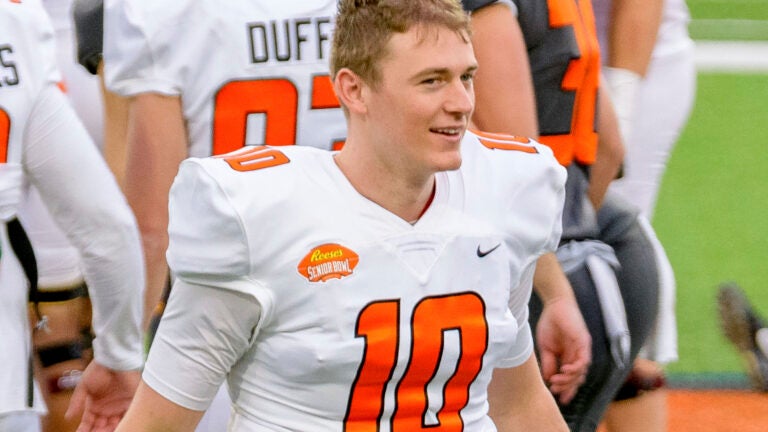