Attackers Lyle Thompson and Andrew Kew paced the Cannons (1-1) with four goals apiece, Stephen Rehfuss added a goal and two assists, and Nick Marrocco made 11 saves for the Cannons as they built a 9-2 halftime edge and cruised from there.

“I think you learn a lot about yourself when you hit that wall of adversity and some failure,” Cannons coach Sean Quirk said. “We had that Friday night. We went back to the practice field, worked on some of those things, and executed them very well today.”

In their 12-11 loss to the Redwoods, the Cannons led 3-0 but were outscored 8-2 to end the first half. The Cannons then claimed an 11-8 lead, but the Redwoods ripped off four straight to spoil the Cannons’ PLL debut.

When the Cannons built a 5-1 cushion through one quarter Sunday, the Waterdogs never made the pivotal run that often unfolds in PLL action. Once they started chipping away, they didn’t have nearly enough time as the Cannons remained stout defensively.

The Waterdogs outshot the Cannons, 34-22, but 19 of the Cannons’ shots were on goal, as opposed to 17 for the Waterdogs. The Cannons hit 59 percent of its shots compared with 17.6 percent for Waterdogs.

Waterdogs coach Andy Copelan said he believed his team gave up the middle of the field too easily and allowed the Cannons to dictate and control tempo. While part of the Cannons’ early run was due to some sluggishness from the Waterdogs, the larger factor was simply that the Cannons had Thompson and Kew and the Waterdogs didn’t.

Thompson has six goals in two games, and he frequently crept in from behind the net and fired shots past the goalie from a variety of angles Sunday. Kew, Rehfuss, and Ryan Drenner, among others, chipped in, and it was too late when the Waterdogs started to get in a rhythm.

Rabil said that because the Cannons’ roster features many new players, there are no cliques. At the same time, he said there’s some imposter syndrome, and the focus is on getting those players to truly believe that they belong.

Quirk believes they have a long way to go, but he called it an “accountable team and very selfless group.”

“It’s always great to get a victory,” Quirk said. “I thought our guys competed well today and played as a unit, played very unselfish. Every team in this league is really, really good, so it’s good to get that first victory tonight.”

After allowing 12 goals Friday night, Duxbury native Nick Marrocco had a 64.7 save percentage Sunday. One of the Waterdogs’ goals was a 2-pointer, so he only allowed six shots past him on the day.

Rabil said Marrocco, who earned a game ball, stayed high really well and was extremely solid in net. The Waterdogs thought they had a plan to attack him, but he learned from game one and adjusted seamlessly.

Marrocco was the starting goalie on the Cannons team that won the Major League Lacrosse championship in 2020 before the relaunch placed them in the PLL.

Rabil credited the rookie Rehfuss for his adaptability and fresh legs, noting that he also got a game ball afterward.

“He’s a rare player,” Rabil said. “I didn’t expect it, for someone to be able to flip from attack to midfield so seamlessly.”

He said the Cannons plan to keep giving Rehfuss the ball.

The PLL released a statement Sunday saying it had “become aware of an altercation between Matt Gaudet of the Chrome Lacrosse Club and Austin Staats of the Chaos Lacrosse Club.” The statement also said both players had been “suspended indefinitely pending further investigation by the PLL Discipline and Conduct Committee.” The Chaos and Chrome did not face each other this weekend at Gillette. Gaudet did not play in the Chrome’s 14-11 loss Sunday to the Redwoods . . . On Saturday, the Whipsnakes beat the Chaos, 13-7, and the Archers cruised past the Atlas, 18-6.

Belichick is a fan

Rabil said he chatted with Patriots coach Bill Belichick throughout the week and that Belichick is excited by the direction of the league. “I get a chance to talk to him about it quite regularly,” Rabil said. “I think we’re all witnessing where professional lacrosse is headed.” … The season continues next weekend in Atlanta. The Cannons are set to face the Whipsnakes on Saturday at noon, then don’t play again until June 27 against Atlas Lacrosse Club in Baltimore. It’s unclear whether former Patriots star Chris Hogan will compete in either of those games. He didn’t see action this past weekend at Gillette. 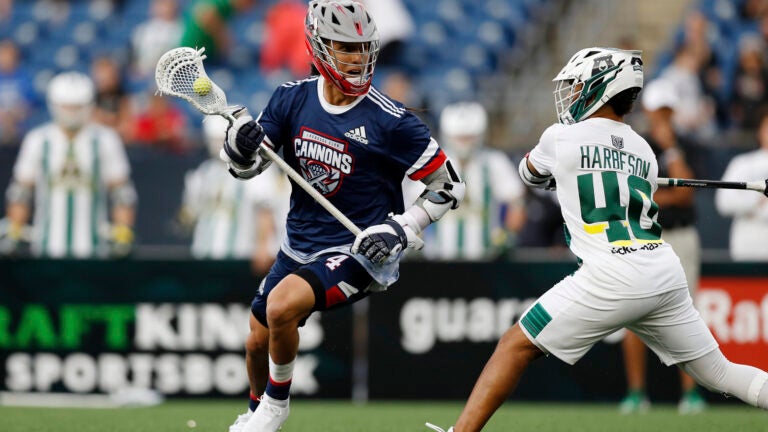