Both the Sports Hub (98.5 FM) and WEEI (93.7 FM) can and will claim to being Boston’s top-rated sports station over the summer in the Nielsen Audio ratings.

What is not in dispute is the remarkable ascent to the top of the morning drive ratings by WEEI’s “Kirk & Callahan’’ program.

(An explanation of the stations’ different streaming measures is, as usual, at the bottom of this story.)

In the specific day parts, WEEI earned a striking victory in the mornings with “Kirk & Callahan’’ finishing first (13.7), one spot ahead of the Sports Hub’s “Toucher and Rich’’ (10.6, plus 0.3 for its online stream).

“Kirk & Callahan’’ was the highest-rated show in the market in the summer.

It is the second straight three-month period in which WEEI’s morning program topped the Sports Hub in the 6-10 a.m. time period.

Before last spring, it hadn’t happened since summer 2014.

This summer’s ratings were almost a direct reversal of summer 2016, when “Toucher and Rich’’ was first (13.0) and “Kirk & Callahan’’ second (10.1). That was the ratings period in which John Dennis left the show.

In middays (10 a.m.-2 p.m.), WZLX’s Carter Alan program was first (10.6). The battle for second again comes down to the streaming differences and debate.

But with the 1.2 online stream included, “Zolak and Bertrand’’ vaults to second (10.0) and OMF drops to third.

In the 6-7 p.m. window, the Sports Hub, which usually airs “The Baseball Reporters’’ hosted by Tony Massarotti in that slot, was first (9.2, 2.3 stream). WEEI, which typically features the Red Sox pregame show in that period, was fifth (5.5).

In the 7 p.m.-midnight period, the Sports Hub, which airs “The Adam Jones Show’’ weeknights, was first (8.9, plus 1.6 streaming). WEEI, which primarily carries Red Sox broadcasts in that window, was third (8.4).

A note about streaming: The Sports Hub and WEEI have different methods for measuring streaming, both valid, but the cause of some controversy.

WEEI uses Total Line Reporting, which includes the stream in its Nielsen Audio ratings since it is a direct simulcast of the radio.

The Sports Hub does not use Total Line Reporting and has a separate online stream, which generates a separate share.

Here is a further explanation of what it means — including insight from Nielsen — and why the stations have different interpretations of whether the Sports Hub’s streaming number should be included. 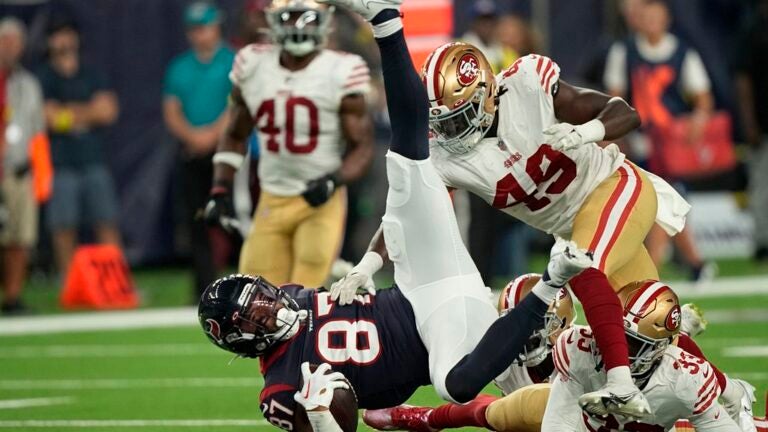 Why NFL fans again have some adjusting to do