A few months ago, during a conversation with a national media personality about the state of sports radio in Boston, I mentioned that for all of the changes in the industry, the market, and how sports fans consume content, WEEI basically had the fundamental lineup as it did 20 years ago.

Gerry Callahan was the center of the morning drive show. Dale Arnold was in the afternoon. And Glenn Ordway was the show-dominating voice in afternoon drive.

Only Callahan was continuous among the three — Arnold and Ordway both lost their gigs only to eventually return — and their partners changed through the years.

But if you had tuned in to WEEI for the first time in, oh, say, 18 years, at any time from 6 a.m. to 6 p.m., you were liable to hear a voice you heard all those years ago. The only main difference is that they are on FM rather than AM now.

So much has changed. And yet one could be convinced that nothing had.

The person suggested it might be worth parodying in a column. I thought about it, and thought about it some more, and then realized the truth: It was beyond parody. Exaggerations for comedy’s sake would not have strayed far enough from reality.

In a two-decade span — during which 98.5 The Sports Hub not only emerged as a challenger to their sports-radio throne but more often than not overtook them in the ratings — WEEI was still using its 1999 playbook. How do you parody something that already feels like one?

Save for the Kirk Minihane meteor — he arrived on the morning show in February 2013 amid rumors the station was headed for a country music format and departed contentiously after five-plus years, a couple of high-profile controversies, and a stretch of generally excellent ratings as those rumors percolated again — WEEI was pretty much the same as it ever was. 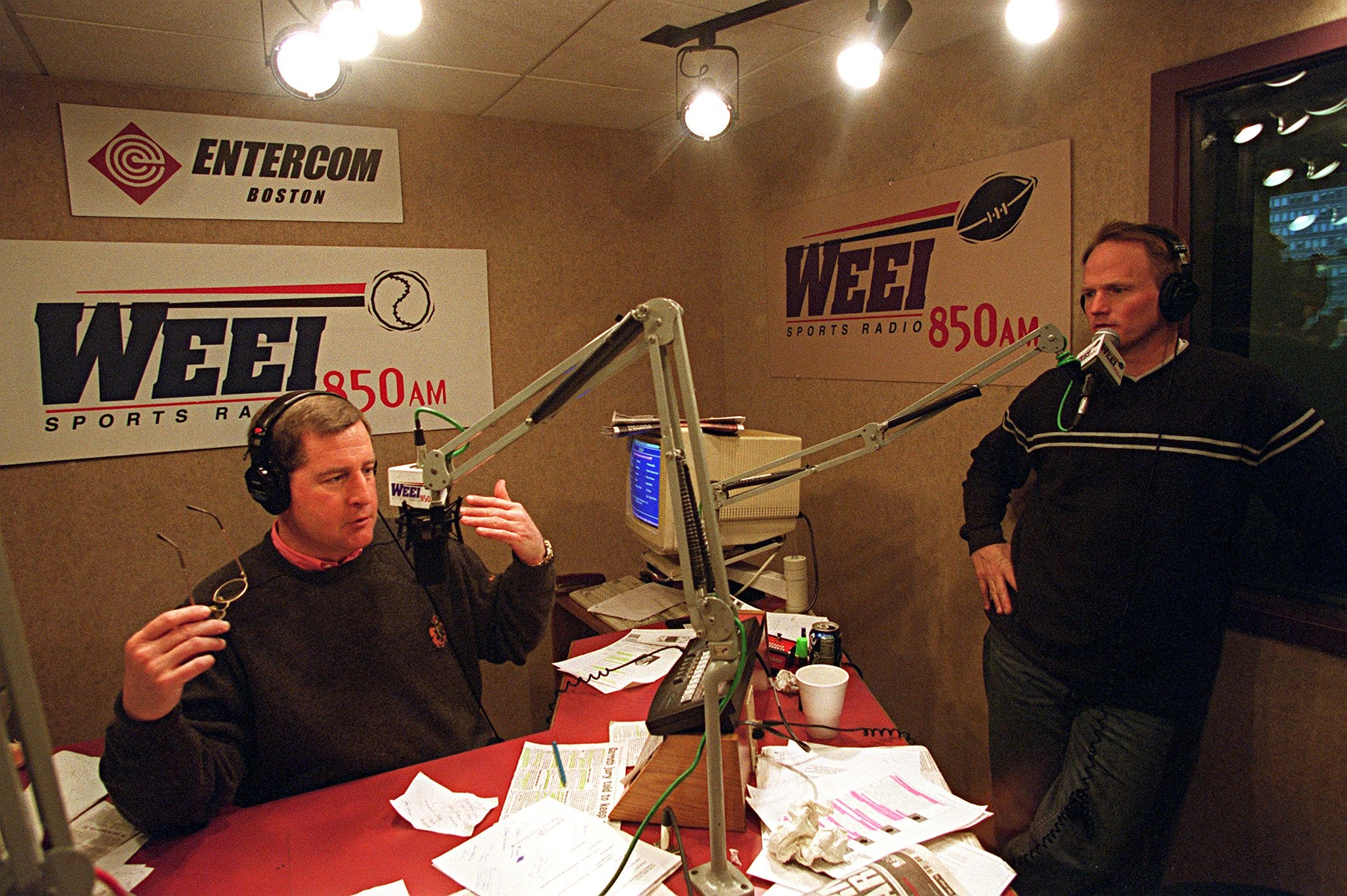 Gerry Callahan (right) was part of WEEI’s debut sports talk lineup in September 1995. He first teamed with longtime cohort John Dennis (left) in 1997, the two shifting to the 6-10 a.m. slot in 1999 as a replacement to Don Imus.

That changed drastically Friday afternoon. Callahan announced on his Twitter feed that he had just done his last show at the station. A little over an hour later, WEEI and parent company Entercom Communications announced that the Greg Hill morning show would move over from rock station WAAF on July 29. In the sixth paragraph, it got around to acknowledging Callahan was departing the company, wishing him well in future endeavors — always the sincerest farewell.

It was not a total surprise that Callahan’s contract, which was coming up at the end of August, wasn’t renewed. Last Thursday, the day before Callahan’s departure, spring Nielsen Audio ratings became available. The morning show, featuring Callahan, co-host Mike Mutnansky, and a cast of third voices, finished fifth with a 6.5 share, a long distance behind the Sports Hub’s Toucher and Rich program (9.1, first).

Last spring, with Minihane still a part of the show, WEEI was second in the slot (9.8) behind Toucher and Rich (10.2). In spring 2017, Kirk and Callahan was first (11.9) while Toucher and Rich finished second (10.8). That is the kind of trend that does not help in contract negotiations.

But it was also one of those changes that, because of the person’s familiarity and impact, is hard to envision until it happens, and even when it does happen can be jarring. Callahan has his flaws. Empathy for anyone with a different life experience than his was fleeting, and the world view he shared on the radio made Archie Bunker look like Meathead.

During Monday’s show, Mutnansky and producers Chris Curtis and Ken Laird shared their memories of working with Callahan, and their admiration and appreciation for him was undoubtedly genuine. At one point, Curtis said, “There are no hollow words with Gerry Callahan. If he says it, he means it.’’ It was intended as high praise. But depending on their perspective, not every member of the listening audience might have heard it that way.

It’s going to be strange without him. While change at the station was overdue, Ordway and the afternoon drive program seemed the more pressing issue. And Entercom’s plan for replacing the show is a curious one. While Hill is well-known and established in the market — he’s been on the air at WAAF for 29 years — he’s unlikely to provide a ratings boost. His show had the same share in the spring among the men 25-54 demo (6.5) as Mut and Callahan.

WEEI is likely to have less revenue, lower ratings, and fewer headaches with Hill’s show. It will be interesting to see whether it takes an approach like Toucher and Rich in striking a balance between pop culture, personal stories, humor, and sports.

But the morning change does little to affect the the midday and afternoon programs. WEEI’s struggles to identify and develop young talent the last decade or so has led to a familiarity at the station that sometimes feels like staleness. Perhaps Danielle Murr, Hill’s co-host, will bring a fresh perspective as a welcome and overdue female voice in drive time.

But change, whether or not you agree it was overdue, will take some getting used to. Gerry Callahan is out, Greg Hill is in, and in the end, all of WEEI’s manufactured drama was no match for the real thing.

Channel 4 tests a 6 p.m. newscast without a sports report