While there were no fans in the stands at Fenway Park and broadcasters Dave O’Brien, Jerry Remy, and Dennis Eckersley called the action from a NESN studio in Watertown, it sounded and felt familiar, more or less like a typical Red Sox game in July.

These are not typical times, of course, with baseball about to start its abbreviated season while the COVID-19 pandemic still rages in many parts of the country. It’s an achievement in and of itself to pull off a baseball broadcast in these circumstances and have it go well enough that it provided viewers with some sense of normalcy, however fleeting.

In a video conference with media Wednesday, O’Brien, Remy, and Eckersley acknowledged that calling the game from a studio — which the trio will do for 55 NESN broadcasts this season — was an adjustment, but one they are more than happy to make.

“Let’s face it, it’s about safety,‘’ said Eckersley. “That’s what went into it. I had no problem at all when they asked me about it. The fact of the matter is, if we’re going to be able to get all three of us together, and that was the best way to do it, I was all for it. It was a no-brainer for me.”

NESN management has said that part of the reason for doing all the games from the studio — they could call the home games from Fenway, if so inclined — is Remy’s high-risk status as a lung cancer survivor. Remy clarified that he did not ask NESN to set up the broadcasts this way, but he is glad that is the approach it is taking.

“The space that we have to work is actually bigger than what we have at Fenway, so social distancing purposes, it makes it a little bit better,” said Remy. “But they certainly didn’t come to me and say, ‘What would you like to do?’

“When they told me what they were planning on doing, I appreciated it. I liked it very much because I thought it was the safest way to do it.

“And I figured if there’s not going to be fans in the stands, what’s the difference? We’re not going to be on the road anyway, we’re going to do games from the studio anyway, so we might as well do them all that way.”

The broadcasters agreed that it is imperative they are in the same room together so that they can read each others’ nonverbal cues and avoid stepping all over each other.

“I watched [an MLB] game the other night on ESPN,‘’ said Eckersley. “The analysts were at home, I believe. And that to me doesn’t cut it. That doesn’t cut it at all.

“I couldn’t imagine not seeing Jerry, like last night. When I see you right away, I’m not going to talk over you, there’s not going to be a pause. That’s what made it right. If I wasn’t in the same room and I couldn’t see you, I’d think it would be impossible.

Remy concurred: “The eye contact is really important among the three of us. Dave navigates it, Eck and I go with it, and we all kind of make eye contact so we know who will be speaking even with the separation we have in the studio.”

The biggest adjustment, they said, was the absence of the crowd, which is almost like another voice on the broadcast in the way the fans’ reactions can dictate the broadcasters’ tone and approach in a given moment, particularly for the play-by-play voice.

While the piped-in ambient crowd noise on the broadcast got some mixed reviews — former Red Sox third baseman Will Middlebrooks tweeted, “I think I hate the fake crowd noise. The timing of it is off just enough to drive me crazy.” — the three broadcasters agreed that it is a necessity on their end.

“From a play-by-play standpoint, I couldn’t envision doing a game without having people there or it sounding like people are there,” said O’Brien.

“That’s the sound of baseball. It affects our rhythm. It affects the rhythm between the three of us. And if you have no crowd noise, I think there’s an urgency, if it’s completely silent, that you have to fill everything, like there’s nothing on the air.

“The crowd takes that away, that wonderful sound, that wave of the crowd. I think it worked very well. There’s still some tweaking to be done, but I thought it worked very effectively.”

“I like the crowd noise. It gives me some emotion, the inflection I think is better, and it just gets you wrapped up in the ballgame more. I thought they did a decent job with it last night.”

Eckersley said he’s going to miss being at the ballpark, and riding the wave of emotion when the crowd is into the game, but that the current setup is the best alternative he can imagine.

“As soon as I put my headset on, it had that little buzz like being at the ballpark, the crowd noise, which is huge,‘’ he said. “When the game kind of peaks at certain times — and last night there was a bases-loaded situation that the Red Sox could have opened it up a little bit — that’s when you don’t get the same thing as being at the ballpark and hearing the crowd and knowing that this is where the game has come to a head.

“You’ve got to have that energy that comes with it. And that’s going to be the hard part. You can’t help but feel it when you’re at the ballpark, and that’s what I’m going to miss.” 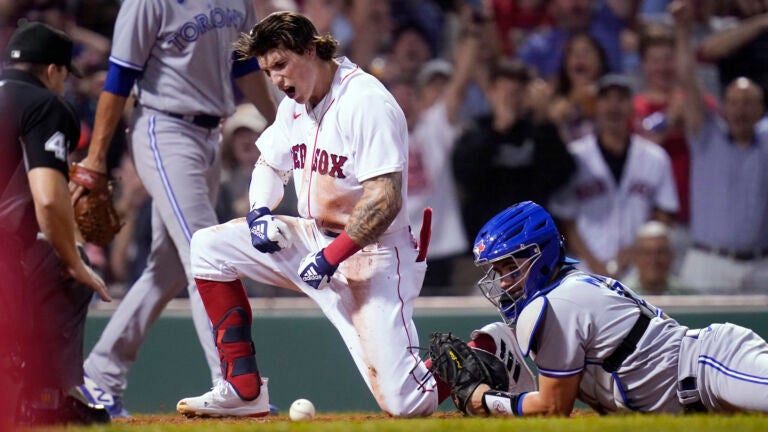