There’s one roster relevant to the Red Sox that did not require any significant rebuilding after the dismal 2020 season: NESN’s in-game broadcast team.

With their candor, humor, and easy chemistry, the three-person booth of play-by-play voice Dave O’Brien and analysts Jerry Remy and Dennis Eckersley was often the only satisfaction to be found in watching the 24-36 Red Sox last season.

“It was kind of weird last year because we got positive feedback from whatever fans were watching,” said Remy, the former second baseman who has been a Red Sox broadcaster since 1988. “Like anybody in any profession, it makes you feel good when you get recognized for doing a good job.

“We felt like we did a good job. The best we possibly could with a lousy team.”

O’Brien, who has called Red Sox games since 2007, first on WEEI before moving to NESN for the 2016 season, said, “Our interactions weren’t always about what was on the field, which could be very tough to watch. We decided, I think collectively, maybe even subconsciously, that we were just going to enjoy each other’s company.

“We could talk about anything. You never know what’s going to come up. And there’s nothing I felt I couldn’t bounce off Rem or Eck. Nothing.

They should have plenty of chances. O’Brien, Remy, and Eckersley are all back this season. O’Brien will call the vast majority of the scheduled 162 games, with Worcester Red Sox voice Mike Monaco as his fill-in.

Remy is scheduled to work 103 games and Eckersley 75, and NESN said the popular three-person booth will be in use for at least as many games as it was last season, which probably means in the 50s.

Eckersley, the authentically irreverent Hall of Fame pitcher who has been with NESN since 2003, said the positive reception from viewers probably encouraged NESN to put them together often again this season.

“I think it’s sort of a natural thing for me and Jerry; you know our history,” said Eckersley, who was teammates with Remy from 1978-84. “But we’re not stupid enough to be chirping about something silly when there’s a game on the line. Everybody knows that. So that’s probably why that happened.

“I thought it was just natural for me and Jerry, and I think Dave did a nice job. He doesn’t get enough credit.”

Said O’Brien, “It’s my job to be the point guard of the broadcast, to set up Jerry for the 3-point shot and Eck for the dunks.”

Perhaps the most memorable interaction last season occurred during a late-season broadcast, a meaningless game against the Orioles in which neither team had much to play for beyond pride. Eckersley and Remy slipped into a discussion, moderated by O’Brien, about how baseball affected the way they look at life, and how they wish they’d been able to enjoy the game more when they were playing. Conversations in the broadcast booth during lost seasons don’t get more compelling or poignant. It was superb television at a time when a viewer probably wasn’t expecting it.

“The discussion that we had about how they never enjoyed themselves the way they wish they could have when they played because there was so much stress and pressure on them really sticks with me,” said O’Brien.

“I had two former NFL quarterbacks call me after that game and say, ‘You have no idea how right that was.’ And I think that a lot of people, even outside sports, felt that way about their jobs or their careers, and it really touched a nerve. That came out of nowhere. And that’s just the way it is with those guys.”

There are some tweaks to the NESN lineup. Jahmai Webster takes over as the in-game reporter, replacing Guerin Austin, whose contract was not picked up. Webster, who joined NESN in 2016, should be familiar to Red Sox fans. He estimates that he’s worked approximately 120 games the past couple of years.

And there is a welcome addition to the broadcast booth. Ellis Burks, who starred in center field for the Red Sox from 1987-92, will be an analyst on some games, while also joining the NESN studio programs.

“It has always been my dream to spend my whole career with one team,” said Burks, who has spent his post-playing career working as a special assistant in front offices, most recently with the Giants. “Since that didn’t happen, what better way to come back to my first team than to cover them on a daily basis, and be a part of a network like New England Sports Network, and bring it full circle?”

Remy and Eckersley are both pleased with the number of games they’re scheduled to work. Road games, at least for the early part of the season, will be called from the NESN studios in Watertown. Neither Remy nor Eckersley is much for traveling, so they enjoy doing those games from the studio, which will be upgraded this year. But they’re both looking forward to getting back to Fenway — most likely in early May — and having some normality return.

“We love to be there Opening Day,” said Remy. “There’s no question about it. But I think this is a smart way to do it, and we’ll be back when it warms up a little bit and more people are vaccinated.”

“We haven’t been to Fenway a long time,” said Eckersley. “So I would have been jazzed to do that on Opening Day. But we would have been probably in some sort of quarantine. We would probably have to go straight to the booth and be stuck, trapped like rats. No communication with anybody. That wouldn’t have been fun.

“We can wait a little longer and make sure it’s right.” 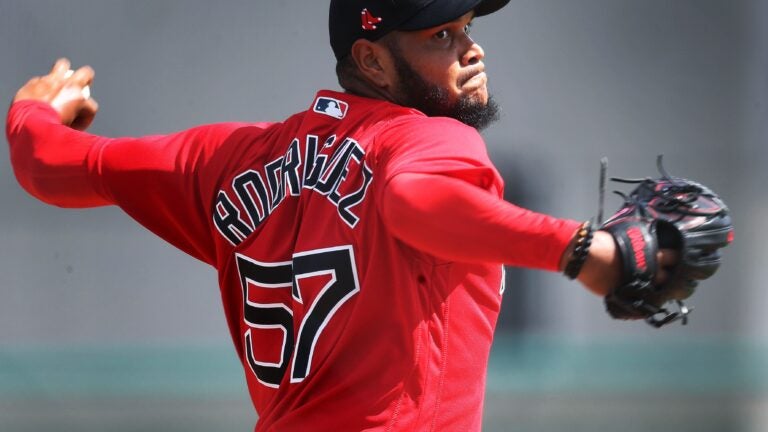 Eduardo Rodriguez, dealing with a sore arm, will not start on Opening Day