There are few, if any, franchises in professional sports that have a history as rich and deep as the Celtics’.

Many of their stories are familiar, part of the region’s permanent sports legend and lore. Others, especially from their compelling recent history, lend themselves to a deeper, nuanced telling.

A new podcast, produced by the team’s Parquet Productions media arm, aims to tell those stories with proper depth and fresh insight by those who were there.

The Celtics on Thursday will launch “View from the Rafters: Behind the Scenes with the Boston Celtics,” the team’s first originally-produced podcast.

The aim of the podcast is not to dig into the latest game and, say, explore what went wrong in the Celtics’ loss to the Sixers Tuesday night. There are plenty of Celtics podcasts that already cover the day-to-day well.

“View from the Rafters” takes a different approach, focusing an episode on going in-depth with a personality or digging into a specific moment in time. It’s such a welcome idea that it’s a surprise it hasn’t been done before.

“We wanted to do something that’s different, rather than just talking about the day-to-day what’s going on with the team,’’ said D’Amico. “We wanted to do something that’s going to go a lot deeper than that. That’s what led us to the premise of taking stories that have been touched, or maybe not been touched on, and getting them to be told from a different perspective or in a different way. That’s the goal, to have conversation where we hear stories that haven’t been told before, or get them from a perspective that hasn’t been told before.”

Two episodes have been banked so far. The debut is a sit-down with Celtics president of basketball operations Danny Ainge. The hosts have also recorded an in-depth conversation with Marcus Smart.

“The interesting thing was we spoke to him the day after the trade deadline,’’  said Chin, who joined NBC Sports Boston as the Celtics’ sideline reporter for the 2013-14 season and, like Grande and D’Amico, has valuable institutional memory when it comes to the franchise’s recent history. “I think that was a relief to him, to have something else to talk about for the 40 minutes we were with him, and to go back and remember things about his life and his path.

“What’s stood out to me about the two interviews we have done is No. 1, how open and reflective Danny and Marcus have been, and also the breadth of topics we have covered with both of them.

“As the sideline reporter, everything was in 40 second increments,’’ she added. “Even in the postgame interview, you get three questions and then you’re out. Whereas this really is a deep dive and allows us to really dig in to something we wanted to know more about. Hearing, for example, Marcus Smart tell his story in his own words. We all know Marcus overcame so much growing up, but to hear Marcus tell it in a long form, laying it all out and talking candidly about what he’s experienced and gone through in life, to me that’s what this affords and what is really exciting.”

Among other topics on the itinerary is the franchise’s transitional summer of 2013, when Ainge traded Paul Pierce and Kevin Garnett to the Nets and Brad Stevens replaced Doc Rivers as coach.

“To me the best podcasts are the deep-dives,” said Grande, who has been the Celtics’ radio voice since the 2001-02 season. “This is where you get the stuff that you don’t get anywhere else. Obviously, we have the opportunity because between the access to the team that Marc would have, that Abby would have being on the road, I have a certain amount of institutional memory after 20 years doing this.

“The summer of 2013 is a great example. That is a story arc. It’s not just about those two months. It starts with Danny maybe or maybe not making deals in the years before that because of the experience he had with Red [Auerbach], and Danny during his playing days telling Red not to let the team get old. Ray Allen being moved at the trade deadline was a rumor for a couple of years. Who are they going to trade Ray Allen for? There are so many facets to this, and to me that was the only way to do this.”

The podcast will be available on multiple platforms, including Spotify, Apple Podcasts, and Google Podcasts. 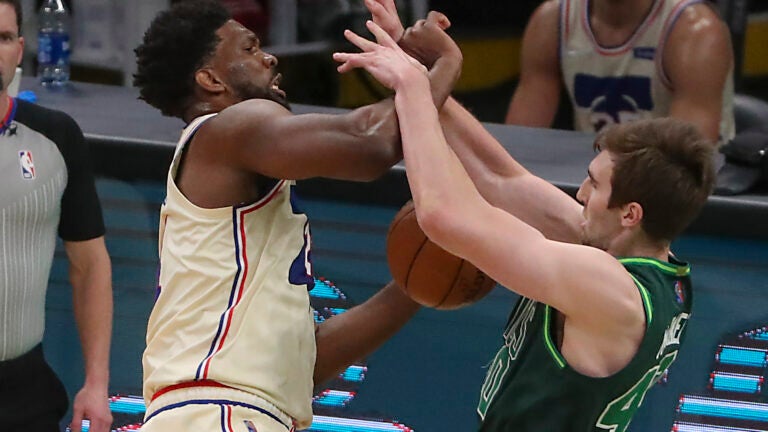