In Kendrick Perkins’s seven-plus seasons with the Celtics, he became a hugely popular figure, his familiar scowl and brute-force playing style wholly incapable of masking his warm, charismatic personality.

His easy authenticity and unfiltered candor has translated to a successful post-playing career as an NBA analyst, at ESPN and, locally, at NBC Sports Boston.

Many Celtics fans still believe the team never should have traded Perkins in 2011. Fortunately, at least one of his current teams plans to keep him around for a long time.

On Friday, ESPN confirmed that Perkins has agreed to a multi-year extension to remain at the network.

“I’m really happy about it, because I really enjoy it, and I don’t think a lot of people expected me to do this when my career ended,” said Perkins, who retired from the NBA after the 2018 season. “”At first when I started doing TV stuff, people were like, ‘Man, Perk, he’s so country, he talks slow,’ and things of that nature. But now people know who I am now, the individual, and they know what they’re going to get from me.

“I think it’s working out because I’m real, man. I’m myself. I’m not trying to be something I’m not or somebody else. I’m not going out there to try to use big words or study encyclopedias to upgrade my vocabulary.

“I’m a country boy from Beaumont, Texas. Sometimes I may speak with broken English. But what I always tell people is that this is not English class. We’re talking basketball here. We’re talking about hoops. So I approach it as a real job, but I love it because I get to be myself, and talk about it like I’d talk about it with my friends or teammates. I think people watching like that and know I’m being real.”

Perkins will continue to appear on a multitude of shows and platforms at ESPN, including “The Jump,” “First Take,” “Get Up,” and “Hoop Streams,” the Cassidy Hubbarth-hosted streaming program that has built an impressive audience, averaging more than 780,000 viewers per episode.

He will also continue in his role as an analyst on NBC Sports Boston’s Celtics programming. ESPN permits its talent to work for other entities on a case-by-case basis. Play-by-play voices Mike Breen, Boog Sciambi, and Matt Vasgersian are among those who also work for regional sports networks not affiliated with ESPN.

“My schedule works out well,” said Perkins, who also finds time to coach his son’s AAU basketball team. “The majority of the shows I do for ESPN are throughout the day on weekdays. So I’m able to do the Boston job because it’s mostly in the evening time. The only time the Celtics have an afternoon game is really on the weekends, so I’m able to do that too, because most of the time I don’t have anything to do [for ESPN]. And if I do have something for ESPN on the weekend, it’s usually early in the morning ‘SportsCenter’ or the late evening ‘SportsCenter,’ so it’s pretty easy to manage the two.”

Perkins said he appreciates the variety of his job, and that he’s not pigeonholed into one format.

Because Perkins is a habitual truth-teller, it carries weight when he expresses optimism about what’s ahead for the Celtics, who entered Friday’s matchup with the Bulls in sixth place in the Eastern Conference.

“The season for the Celtics has been an emotional roller-coaster,” he said. “They’ve had to deal with COVID, a lot of injuries, and things of that nature. But when you talk about where they are at right now? They’re in a good position. They just need to go out there and perform, and they’re capable of putting it all together as they head into the playoffs. I know they’re not going to end up with as high of a seed as everyone thought, but the season is still in their hands. To be honest, I think they’re in a pretty damn good position. If they can get fully healthy, no COVID issues, going into the postseason. I think they can match up with anyone.”

While Perkins’s television career is thriving, it must be noted that a recent walk-on guest star during one of his appearances is no longer in the industry.

While he was on NBC Sports Boston’s “Celtics Postgame Live” on April 15, Perkins went viral when he ended up holding his wife’s tiny Pomerian dog on the air after it had been making noise in the background.

Perkins confirmed that the dog’s star turn was a one-time thing.

“That was enough of that,” he said with a laugh. “No more cameos.” 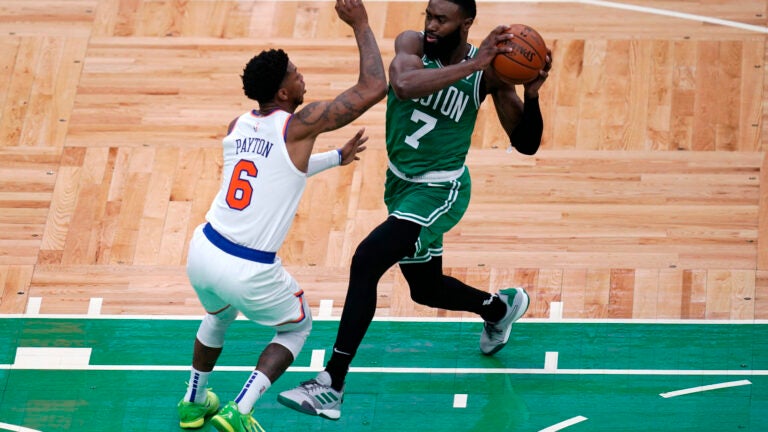