Turner Sports doesn’t have the biggest portion of the new NHL television rights deal. That belongs to ESPN. But it will have the sport’s biggest name as part of its broadcasts.

Turner confirmed Wednesday that it has reached a multi-year agreement with Wayne Gretzky to be a studio analyst during the NHL regular-season and throughout the playoffs beginning with the 2021-22 season.

Gretzky, the NHL’s all-time leading scorer known as “The Great One,’’ left his role as vice chairman of the Edmonton Oilers, for whom he helped win three Stanley Cups as a player, after the team was eliminated from the playoffs earlier this week.

“I’ve long admired Turner Sports’ coverage of the NBA, among other sports, and I’m thrilled to be joining the studio team in their inaugural NHL season,” said Gretzky in a statement. “This is an exciting opportunity to share my experiences and perspectives on the game I will always cherish, while hopefully informing and entertaining fans along the way.”

Turner Sports also announced that veteran play-by-play commentator Kenny Albert and analyst Eddie Olczyk will call live games for Turner Sports throughout the regular season and the Stanley Cup Playoffs on its networks, TNT and TBS. Albert and Olczyk are currently calling the Stanley Cup Playoffs for NBC, which is in the last year of its rights deal.

“Calling the NHL’s biggest games – including the Stanley Cup Final – has been a lifelong dream since I was five years old,” said Albert. “I look forward to this tremendous opportunity with Turner Sports and can’t wait for the puck to drop on the 2021-22 season! Becoming a teammate of ‘The Great One’ and sharing the broadcast booth with Eddie Olczyk – one of the best analysts in all of sports and a long-time friend and colleague of mine – is the icing on the cake.”

Said Olyczyk: ““I am grateful for the opportunity to be part of the Turner Sports family and its coverage of the NHL I’m equally thrilled to be on the same team with ‘The Great One’ for the first time in my career.”

Turner Sports reached agreement with the NHL in late April on a seven-year multimedia partnership that includes rights to air the Stanley Cup Final three times over the length of the contract on TBS and TNT. The networks also will be the annual home of the NHL Winter Classic.

Turner’s part of the NHL rights deal was announced approximately six weeks after the league reached agreement with ESPN on the first part of the rights package, which includes four Stanley Cup Final series over the seven years. 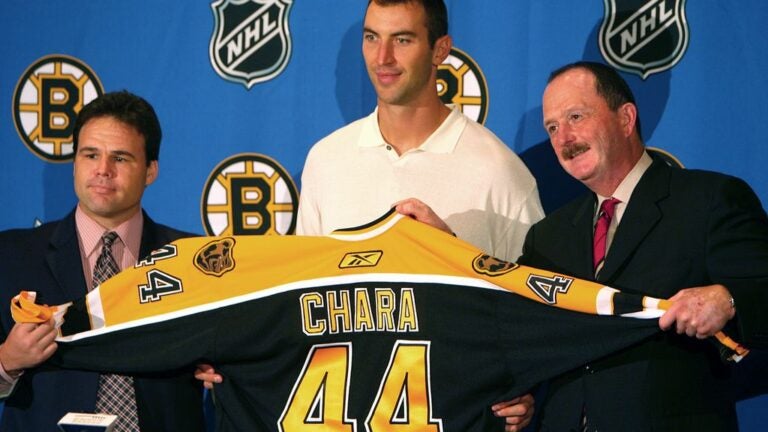 Timeline: Looking back at Zdeno Chara’s career with the Bruins