NFL teams were informed Tuesday that locker room access, at least to begin the season, will be limited to 50 fully vaccinated staff members. That includes coaches, trainers, and equipment personnel, among other team-employed positions.

This is understandable and the responsible thing to do given the spike in COVID-19 cases and the threat of variants of the virus as morons such as Bills receiver and mask/vaccination conspiracy theorist Cole Beasley continue to protest doing the right thing for society.

Team-affiliated media is also among those permitted in the locker room. This should raise the antennae of media members who are not receiving a paycheck from the team, the reporters who hustle to cultivate sources in order to find out the truth and inform readers and viewers about what is really going on with a team.

And that suspicion remains valid. Team-affiliated media should not be permitted back in the locker room and granted far better access when independent reporters will often remain limited to the controlled, exasperating environment of Zoom calls. The Patriots.com reporters, particularly someone with deep institutional knowledge such as Paul Perillo, are credible — which is why they should be treated like every other reporter.

Teams are encouraged in the policy to accommodate requests for one-on-one interviews outside of the locker room after games and practices, but the cooperation level is going to vary from team to team, and the Patriots aren’t exactly known for encouraging actual journalism.

Time will only tell if those locker room doors open up again for the media when the virus is finally defeated. This latest development suggests skepticism, always a worthwhile tool for a reporter, is well-founded.

Contrary to what his more hyperbole-prone colleagues might have suggested in recent weeks, Glenn Ordway did not invent sports radio in Boston. Such a suggestion is disrespectful, even if accidentally, to the likes of Guy Mainella and Eddie Andelman, among others.

Ordway’s legacy is historic in a different, but just as impressive, way. He didn’t create sports radio around here, but he figured out better than anyone who came before what would work in this market. Ordway, who retired Thursday as a full-time host at WEEI, conjured a brilliant formula that was perfectly copacetic with the cynical nature of the Boston sports fan.

The afternoon-drive “The Big Show” in the late 1990s and early 2000s, which featured Ordway as the irreplaceable master of ceremonies with a rotating cast of guest hosts, was must-listen radio in that time when Boston teams couldn’t muster a championship.

Ordway was eventually surpassed as the sports radio voice in the city by a former “Big Show” understudy, The Sports Hub’s Michael Felger, and recent ratings suggest Ordway is moving on from a daily presence at the right time. But even if he’s only an occasional voice on Boston sports radio going forward, his imprint on the genre is permanent.

Been a long time

The Patriots will get CBS’s No. 3 broadcast pairing of Kevin Harlan and Trent Green for the first two weeks of the season, the home opener against the Dolphins and then Week 2 at the Jets. It’s the first time since the 2014 season that a broadcast team featuring Jim Nantz or Al Michaels on play-by-play won’t call the Patriots’ opener. Nantz and Tony Romo called the Patriots’ opener for CBS in 2018 and ‘20, while Michaels and Cris Collinsworth had it for NBC’s “Sunday Night Football” from 2015-17, and again in 2019. In 2014, Greg Gumbel and Green, then CBS’s No. 3 team, called the Dolphins’ 33-20 win over the Patriots to kick off the season. That Patriots season, as you may recall, ended better than it began … I regret to inform you that the ending doesn’t change, but ESPN’s upcoming “30 for 30” four-part documentary series on the talent-laden, reckless 1986 New York Mets, titled “Once Upon a Time In Queens,” is a must-watch. Yes, even for Red Sox fans. A particularly stunning admission by ace pitcher Dwight Gooden, whose extraordinary early career was derailed by drug use: After Celtics draft pick Len Bias died of a cocaine overdose in June 1986, Gooden went to his dealer and said he wanted the stuff that killed Bias. “That’s sick, but that’s where I was at, at that time,” said Gooden in the doc. “I would say, ‘Hey, I want the Len Bias stuff,’ meaning in street terms, I want the strongest stuff you have. That’s how crazy my brain was at that time. Can you imagine?” Directed by Nick Davis, the series airs on Sept. 15-16 … A tip of the ballcap to NESN and WEEI for helping to raise more than $3.8 million for the Jimmy Fund during its two-day Radio-Telethon. Extraordinary work all around. 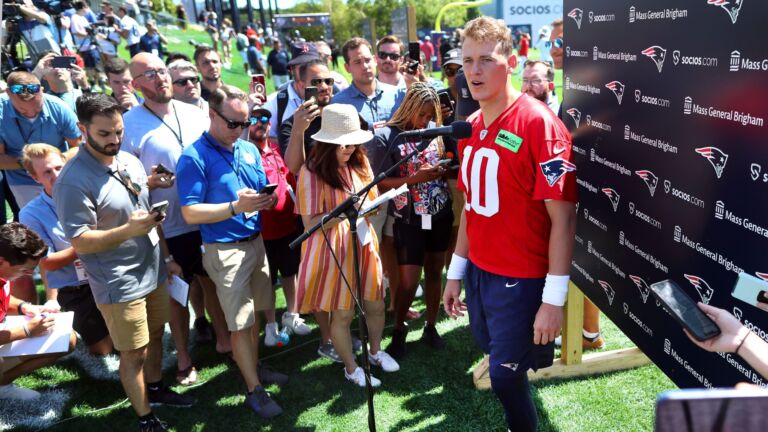 'This is his team': Mac Jones emerges as star and leader of Patriots at training camp