Longtime Lombardi Trophy hoarder Bill Belichick remains more popular than every other coach in the Boston market, the improved Red Sox (over 2020, at least) haven’t caught fans’ fancy, and the Revolution are making more of us into soccer fans than even “Ted Lasso.”

Those are the few of the takeaways from the 10th annual New England Sports Survey, conducted by Sudbury-based Channel Media & Market Research, which was released Wednesday.

The survey, the results of which usually make sense with only a bewildering result or two mixed in, attempts to gauge fans’ opinions about Boston sports personalities, topics, and issues.

This year, it was generated by an e-mail poll of 16,077 New England sports fans from Sept. 1-7. The survey has a margin of error of plus or minus 2 percent and a confidence level of 98 percent.

The Revolution are catching on: Fifty-two percent of respondents rated the performance of Revolution coach/sporting director Bruce Arena and team president Brian Bilello over the past year as excellent or better, the best among all five major Boston sports teams. That’s an increase of 31 percent over last year’s survey. Eighty-five percent of those surveyed said they believed the Revolution, who have 10 more points than any other MLS team this season, have improved for the better rather than stayed the same or gotten worse.

Arena’s club was just a point below the Pigskin Belichicks when fans were asked which team has best chance to win a championship in their current or coming season. The Patriots were at 28 percent (hop on the bandwagon now, I say), while the Revolution came in at 27 percent, and Bruins checked in at 25 percent. I might give the Bruins the best odds if they could somehow convince David Krejci to return pre-playoffs.

Not winning ‘em over: Thirty-seven percent said they follow the Red Sox much more or somewhat more than they did last season, while 63 percent said they follow the same amount, less, or much less than a season ago. This one surprised me like fly balls have flummoxed Red Sox outfielders lately. The Sox were brutal in 2020, winning just 24 of their 60 games, and the season took place in one of the more trying stretches of the pandemic. This year’s team is much more interesting, likeable, and talented, even if they’ve turned into a puddle lately.

Passing judgment: Sixty-three percent agreed with the decision to release Cam Newton. We may find out Friday, when he releases a promised Instagram video, how Cam Newton feels about the Patriots’ decision to release Cam Newton. Eighty-eight percent said Mac Jones should be the Patriots’ quarterback. Five percent said bring back Newton. The 2 percent who voted for Jarrett Stidham must be stubbornly sticking to a take from last year. Michael Bishop has a better chance of being the Patriots’ quarterback this year than he does.

The upside down: The Patriots and Celtics basically flipped this year when respondents were asked which team has done the most to make itself better in the past year. In 2020, the Celtics received 45 percent of the vote, while the Patriots, who parted ways with a certain championship-hoarding quarterback, received 5 percent. This year? The Patriots, after their offseason spending spree, came it at 46 percent, while the Celtics got just 8 percent. I guess signing Jabari Parker in April just wasn’t enough for some people.

Take the shot: Seventy-nine percent agreed it should be mandatory for professional athletes to be vaccinated. The 15 percent that voted no presumably had Fox News on in the background as they answered the survey. On the list of what fans believe are the 10 best things about sports, No. 1, at 20 percent, was having fans back in the venues. (The Bruins’ postseason run was second, and the Patriots drafting Mac Jones was third. It wasn’t the most eventful year in Boston sports.) I imagine we can agree 100 percent in hoping that this is the last year in which there have to be COVID questions on this thing.

Own goals: Robert Kraft regained his crown as the owner believed to have done the best job with his team over the past year (31) percent. The Patriots’ owner finished first in this category every year from 2012-18, but was nudged out by Celtics owners Wyc Grousbeck and Steve Pagliuca in ‘20. Bruins owner Jeremy Jacobs finished second this year (22 percent). It’s been quite a rise from receiving 1 percent of the vote in 2017. Bruins fans: Does Jacobs really deserve that?

Other scattered revelations: Belichick is undefeated in the category of most admired coach, earning 49 percent of the vote this year. His high is 75 percent in 2017. That’s the kind of approval rating that happens after a comeback from down 28-3 in the Super Bowl … The Patriots received some version of an A, including three A-plusses, every year from 2012 to 2018 when fans were asked to give them an overall grade for their performance. That dropped to a B in 2019, and a C-plus last season. Bet it goes up to some version of an A again in next year’s survey. … The player Patriots fans would most like to acquire is Seahawks receiver DK Metcalf. Man, if only he’d been available when they spent a first-round pick on that Lovett Purnell imitator, N’Keal Harry. (He … was … available? Oh. Oh no.) … Those surveyed were given seven options, ranging from 1 (completely disagree) to 7 (completely agree) when asked whether they would like to re-sign Tuukka Rask as the Bruins’ goaltender. Every one of the options received at least 10 percent of the vote, in case you were wondering if he still remains one of the most polarizing figures in recent Boston sports lore. The winning number was 6 at 22 percent. … Red Sox fans said the player they most wish they could acquire is Angels two-way superstar Shohei Ohtani. He’s an excellent choice, especially compared to last year’s winner, the disgraceful Trevor Bauer.

Media notes: On a scale of zero to seven, with seven being excellent and zero being, oh, the equivalent of watching Franchy Cordero trying to hit a breaking ball on an endless loop while you’re sleep-deprived, 51 percent graded NESN’s additions of Mo Vaughn, Jonathan Papelbon, and Kevin Youkilis to the Red Sox pregame show as a six or seven, while 48 percent gave the same marks to the Ellis Burks hiring. He’s too formal in the booth, but I’m not giving up on him yet. … As the media columnist, I get more gripes about expert contrarian Michael Felger than probably any other personality in the market. But the ratings remain massive for The Sports Hub’s “Felger and Massarotti” show, and this survey annually confirms the grip Felger has on the market. He was voted favorite local TV personality (28 percent), favorite local sports radio personality (22 percent), and along with co-host Tony Massarotti claimed best local sports radio show (28 percent) and best local sports television show for its simulcast (24 percent). … The survey continues to refuse to separate play-by-play and color analyst into separate categories for some reason. NBC Sports Boston Celtics voice Mike Gorman was first (22 percent) in the category of favorite play-by-play voice or analyst, while Dennis Eckersley, the NESN Red Sox analyst, was second (21 percent) and Jerry Remy a close third (20 percent). Get well soon, Rem. … Ch. 4′s Steve Burton was favorite sports reporter (18 percent), Patriots Fifth Quarter on Chs. 4 and 38 was pregame/postgame sports TV show, Scott Zolak of the Sports Hub’s Patriots broadcasts was favorite radio color analyst (30 percent), Tom Curran’s Patriots Talk on NBC Sports Boston was favorite podcast (10 percent), and the byline on this silly piece was named favorite sports writer (20 percent) and sports personality trusted the most (18 percent). The checks are not in the mail. I’d tell you they were, you see, if I were less trustworthy. 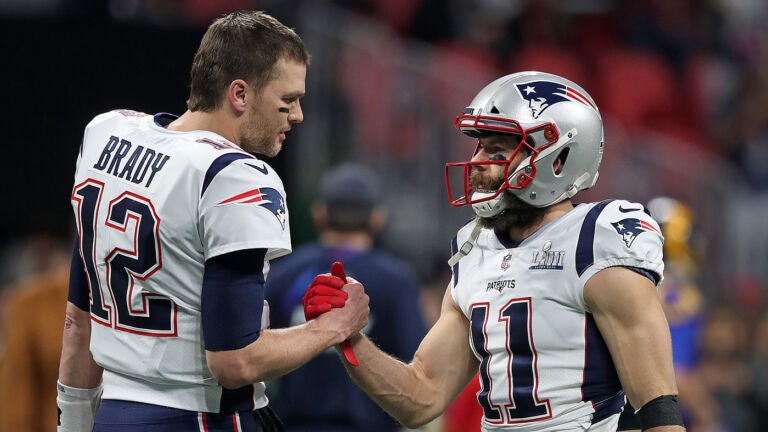 9 things we learned from Episode 9 of the Tom Brady documentary, ‘Man in the Arena’