While baseball fans universally remember where Babe Ruth began his legendary career, fewer might recall that it ended in the same city. Ascending with the Red Sox prior to his infamous sale to the Yankees, Ruth descended into retirement in a forgettable half season with the Boston Braves in 1935.

The strange sight of Ruth in a Braves jersey ultimately proved to be little more than a lasting image of a star who held on one year too long. His purpose with the Braves was born more out of commercial value than any realistic expectation of on-field performance (team owner Emil Fuchs saw Ruth as a means to help keep the team out of bankruptcy). And at 40-years-old, Ruth was hobbled by injuries exacerbated by his unhealthy lifestyle.

Yet for one more afternoon in Pittsburgh, Ruth turned back the clock. On May 25, 1935, baseball’s original home run king gave his fans one final show.

Sitting on 711 career home runs, Ruth swatted three in a single day, going 4-4 with 6 RBIs. The Boston Globe account from the day described his “prodigious homers”:

Twice he cleared the playing field with home runs which have been made in the same manner by ordinary sluggers. The third time, in the seventh inning, he caught hold of one of Guy Bush’s slow curves, and with one mighty swipe sent it clear out of the ballpark 50 feet over the right field stands, the first time the ball had ever been knocked out of the park in that particular spot. 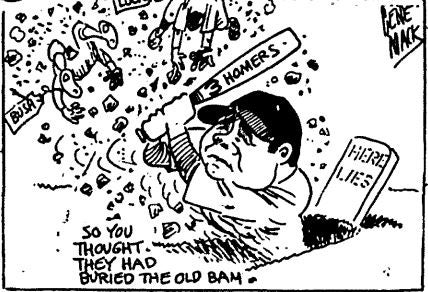 Babe Ruth portrayed in an illustration from May 26, 1935 after hitting three home runs.

The record home run proved to be the final of his career. Yet it electrified even the away fans, as the Pittsburgh Press noted:

Pirate players stood in their tracks to watch the flight of the ball. It was a home run all the way and when the ball disappeared behind the stands, there was a mighty roar from the crowd of 10,000.

Fittingly, given the team’s ultimate performance over the course of the season, Ruth’s awesome hitting display wasn’t enough to carry the Braves to victory. The Pirates still triumphed, 11-7. And Ruth’s persisting injuries, coupled with growing animosity towards Fuchs, led him to retire almost a week later. The Braves would go on to finish the season 38-115, setting a record for lowest winning percentage in National League history.

Here’s footage of Ruth during his final season as a member of the Braves from spring training in 1935:

The Astros are better, but the Red Sox proved again they can compete with anybody