NEW YORK (AP) — A major league official testified he suggested Ángel Hernández be removed from consideration for the 2015 World Series because he did not think Commissioner Rob Manfred would approve the umpire to work baseball’s premier event.

Hernández sued Major League Baseball in 2017, alleging race discrimination and cited his failure to be assigned to the World Series since 2005 and MLB’s failure to promote him to crew chief.

Documents and depositions from pretrial discovery were filed late Friday night and early Saturday in U.S. District Court in Manhattan as part of Hernández’s motion for a partial summary judgment.

A member of the big league staff since 1993, the Cuba-born Hernández worked the World Series in 2002 and 2005. He was not picked after Joe Torre was hired in 2011 to head baseball operations.

Woodfork forwarded the email to Matt McKendry, senior director of umpire operations, and wrote on top: “Four new umpires and the guy in the middle of the largest debacle.”

Woodfork sent a text message to Torre, the chief baseball officer, on the afternoon of Oct. 16 that read: “Angel is going to be a no for Rob.”

Rich Rieker, director of umpire development, sent an email to Woodfork later that day, stating: “I do not know the totals. They are just suggestions. Put who you and Joe want in from the suggestions. Take Ángel out if you want. Any supervisor or director that told any umpires about any lists should be disciplined.”

Cuzzi, Hudson, Welke and Wolf had not worked a World Series. Hernández was involved in a controversy in 2013 when Oakland’s Adam Rosales was awarded a double after a video review rather than a home run. The replay system in use at the time did not provide sufficiently clear images to the New York control room.

Welke and Wolf were picked for the 2015 Series between Kansas City and the New York Mets, along with fellow Series newcomer Mark Carlson. They were joined by Gary Cederstom, Mike Everitt, Alfonso Márquez and Mike Winters.

An MLB document referenced in the case stated just 7% of umpires were minorities. Woodfork testified Torre, who retired in February, “focuses on leadership” in crew chief decisions rather than evaluations.

“We went along with it in order to get a deal on the evaluation system, but frankly, I don’t think anybody places a lot of weight on what they turn in,” he said.

Hernández has been an interim crew chief but hasn’t been picked as a permanent head. Kerwin Danley became the first African-American umpire crew chief in February, and Márquez was elevated to the first Hispanic crew chief born outside the United States. Marquez is the second overall after Richie Garcia, who was born in Florida. Márquez was the first Mexican-born umpire to work in the majors.

”Ángel has earned the opportunity to run that crew,” Woodfork said. “There are times when Ángel successfully performs in that, and there are other times where he seems to struggle.”

He was announced to work the 2017 All-Star Game shortly after he sued. He worked the League Championship Series in 2016 and Division Series in 2018 and 2019. During the 2018 playoffs, he was reversed in three of four video reviews when he worked first base in Game 3 between Boston and the New York Yankees.

Depositions revealed Hernández was fined for trying to get a baseball for a colleague who called Homer Bailey’s no-hitter. Marsh, a former crew chief, testified he was suspended for three days for a similar offense.

Marsh also testified that Richie Garcia was fired as an umpire supervisor in March 2010 following an issue connected with Vic Carapazza, who umped his first big league game a month later.

Many of the documents were filed under seal accompanied by highly redacted public versions. 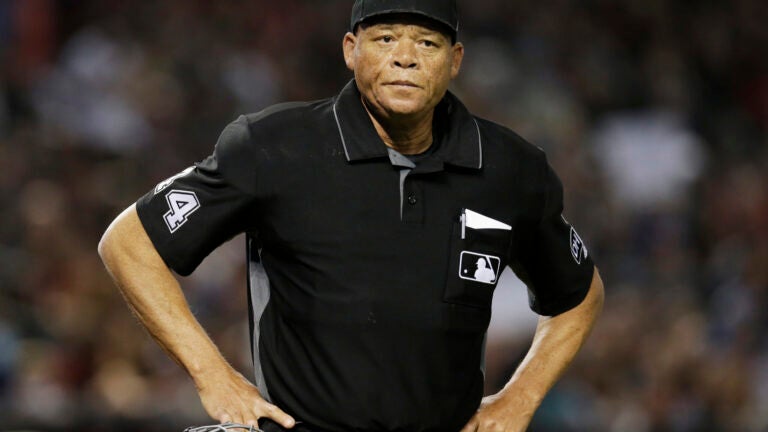