To relieve the stress, he runs daily. But what he really wants, like so many sports fans, is just to go to a baseball game.

“I don’t think there’s any place that I relax more than sitting in Nats Park and watching my now world champion Nats play a game,” Fauci, 79, who grew up in Brooklyn, New York, rooting for the New York Yankees and is now a Washington Nationals fan, said in an interview last week.

That will have to wait. The level of testing for the virus is not adequate enough to allow for such mass gatherings.

But the person with the avuncular demeanor delivering such sobering news as well as practical advice with his Brooklyn accent at news conferences is a superfan with deep knowledge of baseball history.

Fauci, the director of the National Institute for Allergy and Infectious Diseases since 1984, grew up in an Italian enclave in Bensonhurst, Brooklyn, during what is known as the golden age of New York baseball. In every season from 1947 to 1957 except one (1948), at least one of the city’s three major league teams — the Yankees, the Brooklyn Dodgers and the New York Giants — played in the World Series. The Yankees won seven titles in that span.

Fauci said playing baseball in Brooklyn’s sandlots, which produced future major league stars like Joe Pepitone and Sandy Koufax, was better than high school baseball. He adored the Yankees, whose home was in the Bronx, even though the Dodgers played at nearby Ebbets Field before their 1958 move to Los Angeles.

“People don’t realize that half of the people in Brooklyn, half of the kids in the street like me, were Yankee fans, and half were Dodger fans,” he said, adding, “And we used to spend all of our time arguing who’s better: Duke Snider or Mickey Mantle? Yogi Berra or Roy Campanella? Pee Wee Reese or Phil Rizzuto?”

As a boy, he delivered prescriptions for his parents’ pharmacy as soon as he could ride a bicycle and spent much of his free time involved in sports.

He was the captain of the basketball team at Regis High, an elite Jesuit school in Manhattan. “He was a little on the short side for the NBA, but he was talented,” President Donald Trump said of Fauci at a news conference in early April.

“I like all sports,” Fauci said recently, “but I’m really much, much more of a baseball fan.”

After college, medical school and hospital work, Fauci carried his Yankees fandom to Washington. He didn’t care much for the Senators, an expansion team that left Washington to become the Texas Rangers for the 1972 season. He tried becoming a Baltimore Orioles fan, he said, but “that’s tough when you live 40 minutes away.” But when the Montreal Expos moved to Washington to become the Nationals in 2005, Fauci was hooked.

“It kind of triggered in me that kind of fierce affection for a team that I hadn’t had since I used to idolize all the Yankees,” he said. “I just fell in love with the Nats. I don’t consider that I’m being disloyal to the Yankees. I consider it as sort of a replacement for my boyhood love for baseball, which I still have.”

It shows. Last Tuesday, Fauci was interviewed by the Nationals’ longtime mainstay, first baseman Ryan Zimmerman, for the team’s website. They talked about potential scenarios in which Major League Baseball could resume play after stopping spring training in mid-March. Zimmerman offered him tickets. Fauci giddily said he had been a fan of Zimmerman’s since he was drafted by the Nationals out of the University of Virginia in 2005.

In a subsequent interview with the The New York Times, Fauci painted a cautious picture about when baseball could return. Although he said sports could provide a distraction for the public, he conceded that the needed testing wasn’t available yet and warned against a premature reopening of the country.

“There are certain parts of the country — in the Mountain region and in the Midwest and in some of the places where there is very little infection and they’re developing the capability of responding — I think they’re getting back to some form of more normality,” he said. “That’s much, much different than putting somebody in Madison Square Garden to play a Big East game.”

Despite his hectic schedule, Fauci has still found some time for his other passion, running, to boost his mental and physical health. Before the pandemic, his daily routine consisted of eating yogurt for lunch and going on a 7-mile run on the Bethesda Trolley Trail near his office at the National Institutes of Health.Fauci, who has run four marathons and about 50 10Ks in his life, said he looked forward to getting the spread of the coronavirus under control so he could return to his usual daily exercise routine. By then, his beloved baseball, warts and all, could also be back.

“I like the rhythm of the game,” he said. “Some people think the game is too slow. But to go to Nats Park to sit down and have a hot dog and a beer and just watch things go along slowly and then all of a sudden explode with a couple of line drives off the wall followed by a couple of home runs and then — bingo — your adrenaline goes up tenfold.

“That is a catharsis for people who have a stressful life like I do.” 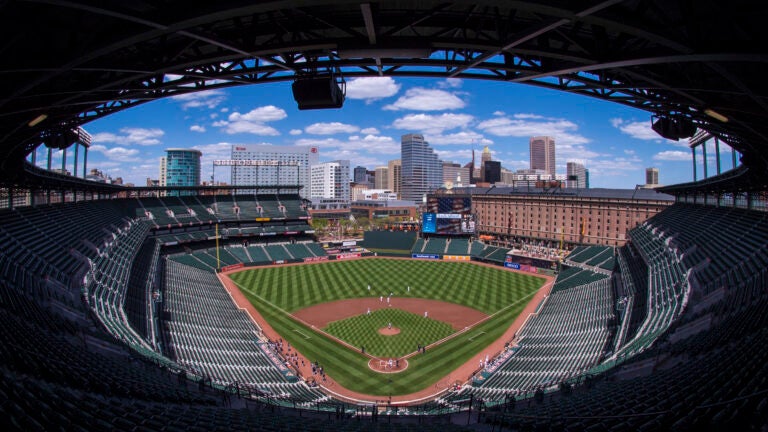